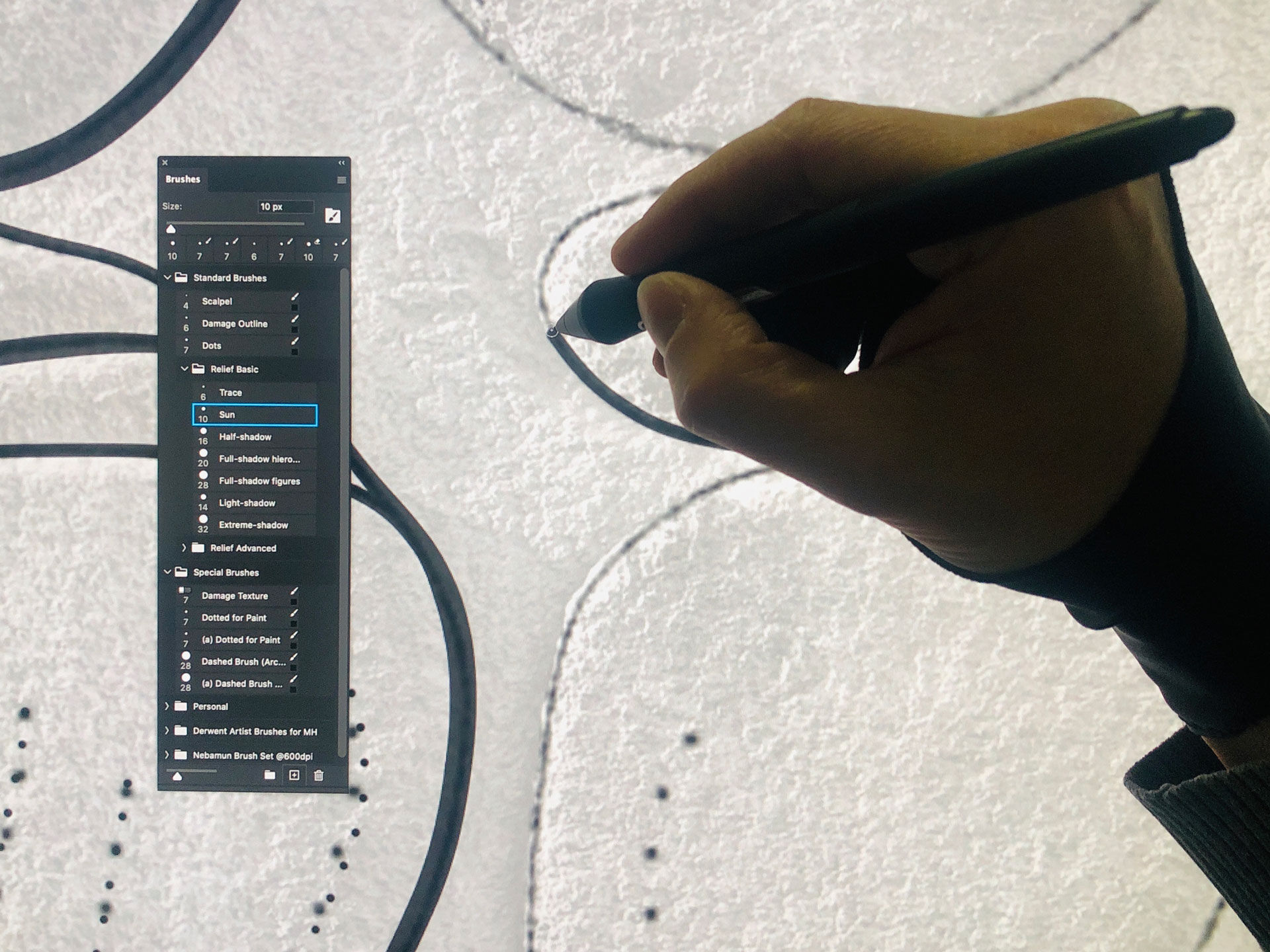 As most of our readers know by now, the Epigraphic Survey’s digital inking method involves a set of ink brushes, attributed with certain pixel brush widths. These Photoshop brushes are the digital equivalents of the Survey’s Rapidograph pens used for decades in the traditional Chicago House method. With many recent changes and additions altering brush behavior in Photoshop CC, digitalEPIGRAPHY takes a look at the prospect of updating the Survey’s official ink brushes.

When a pencil drawing is inked digitally, the artist must use a pre-determined set of ink brushes as to avoid any compatibility issues when the drawing is made part of the large corpus of scenes related to a single monument. The Survey’s two most basic ink brushes represent Sun (10px) and Shadow (20px). Additionally, there is an even thinner brush showing Traces (6px) of earlier decoration. Finally, there is a set of various shadow brushes indicating interior details (Half-shadow (16px)) and more emphasized shadow lines around larger elements (Full-shadow (28px)). There are two more sporadically used brushes for even more nuanced sun-shadow transitions (14px and 32px respectively).

The Epigraphic Survey’s digital ink brushes, set up for their standard 1200 dpi environment have been used unchanged since 2012

Although this set of ink brushes has been functioning really well for almost a decade now, there were numerous changes introduced along the road, concerning the inking of features other than carved lines. While a regular 6px brush works really well for inking damage outlines, this even brush stroke with its rounded edges falls short when indicating damage texture. To create proper textures, Survey artists now use a special bristle brush with tapered edges that produces a much more natural flow of strokes. In 2018, digitalEPIGRAPHY specified the new damage brush design and the Survey’s updated texturing techniques in a lengthy tutorial. Similar updates have been made to yet another important non-decorative surface element, plaster, where the brush width was raised by a pixel, creating a 7px wide regular ink brush for adding dots and circles to imitate plaster texture. A certain level of automation could be added to plaster textures as well with these changes mounting to call for yet another tutorial. 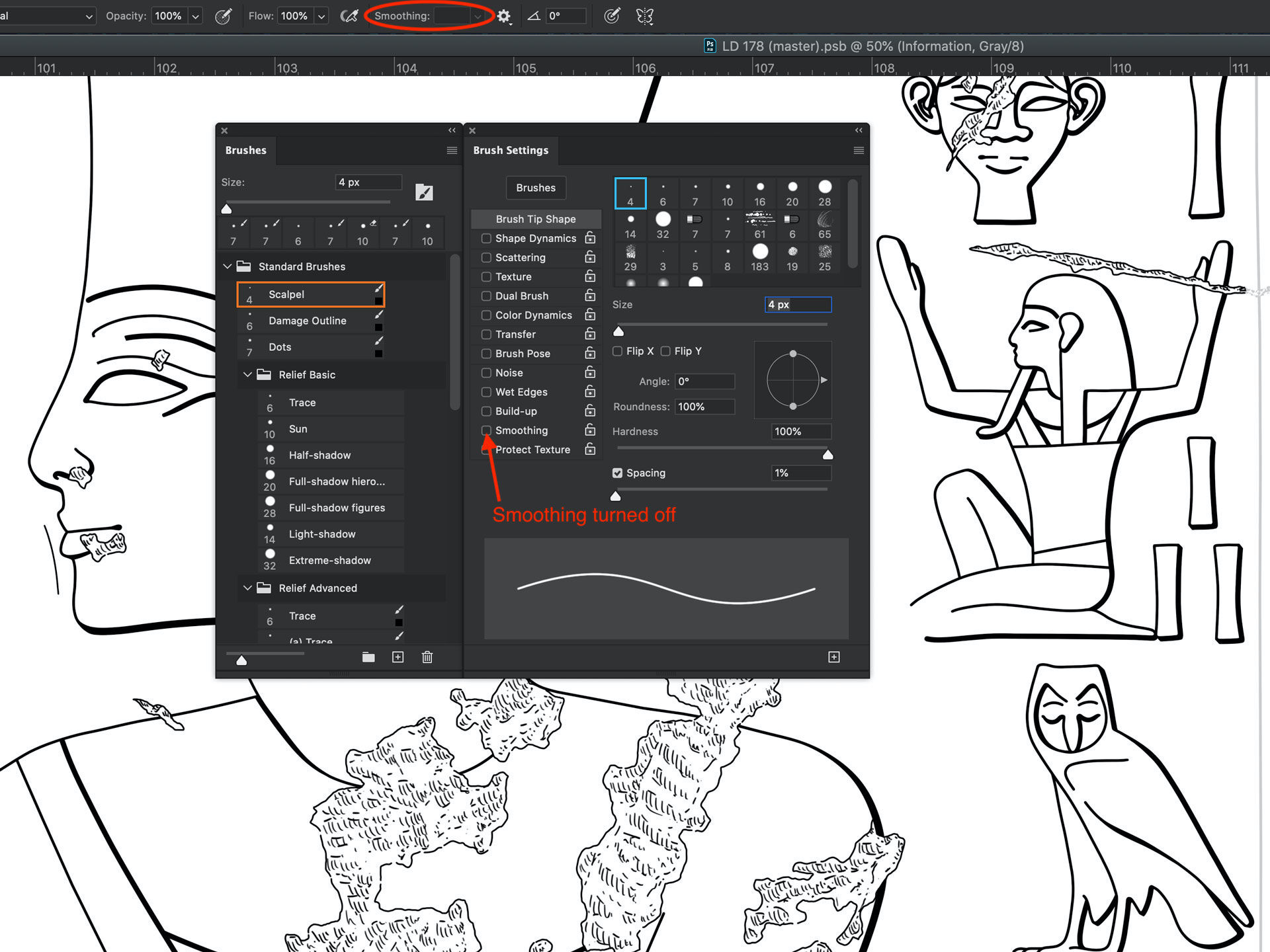 Additionally, starting with CC18, Adobe introduced their long-overdue assisted brush feature, called Brushstroke Smoothing. The tool grants a more polished look with cleaner lines when using a brush, a welcome addition for epigraphers utilizing Photoshop for digital inking. Since we wrote our piece about the use cases and customization options of the tool, Adobe has been busy at work making assisted drawing to be integral part of individual brushes. As a result, a certain preset level of smoothing can now be attached to each new brush design. Although this feature is not always helpful, it can be used to our advantage.

In the past we promoted Brushstroke Smoothing as a feature to be used on a case-by-case basis, adjusting its volume according to our needs. Unfortunately, Adobe doesn’t provide a simple shortcut to toggle said behavior. However, there is a workaround that can be applied to solve this problem. One can tap Option (Alt on the PC) and a numeric key between 1-9 to set the percentage of smoothing in 10% increments between 10-90% (Opt+0 gives you 100% smoothing). Therefore, to toggle between smoothing and no smoothing is possible by setting up two shortcuts on a relevant remote device (most notable options being the Delux Designer keypad, the TourBox controller or Wacom’s own Express Key remote), one with Opt+1 (Alt+1) for almost no smoothing and another one with Opt+0 (Alt+0) for maximum smoothing.

This is the closest you could get to fully control line quality during digital inking before the recent Photoshop updates. While we still prefer controlling line quality as we go, there is a constant problem caused by this technique: when Brushstroke Smoothing is set to anything other than 0%, any rapid brush movement creates a slight lag in building the stroke. Usually, sluggish brush stroke behavior is explained by outdated/weak hardware, however, - somewhat reassuringly - this is not the case here. This behavior is best noticed when adding dots (plaster or paint) or parallel lines (damage) in a swift repetition. The result is often far from what was intended, with dots connecting to form a line or damage texture strokes registering in an unpredictable manner. The only way to bypass this behavior, affecting textures, would require disabling Smoothing in the actual brush’s settings (Window/Brush Settings or F5). What it means is that the artist would have to uncheck Smoothing each time the brush malfunctions and enable it again when assistance is needed. Needless to say, that our precious toggle shortcut doesn’t work at all when the Smoothing option is disabled in Brush Settings. 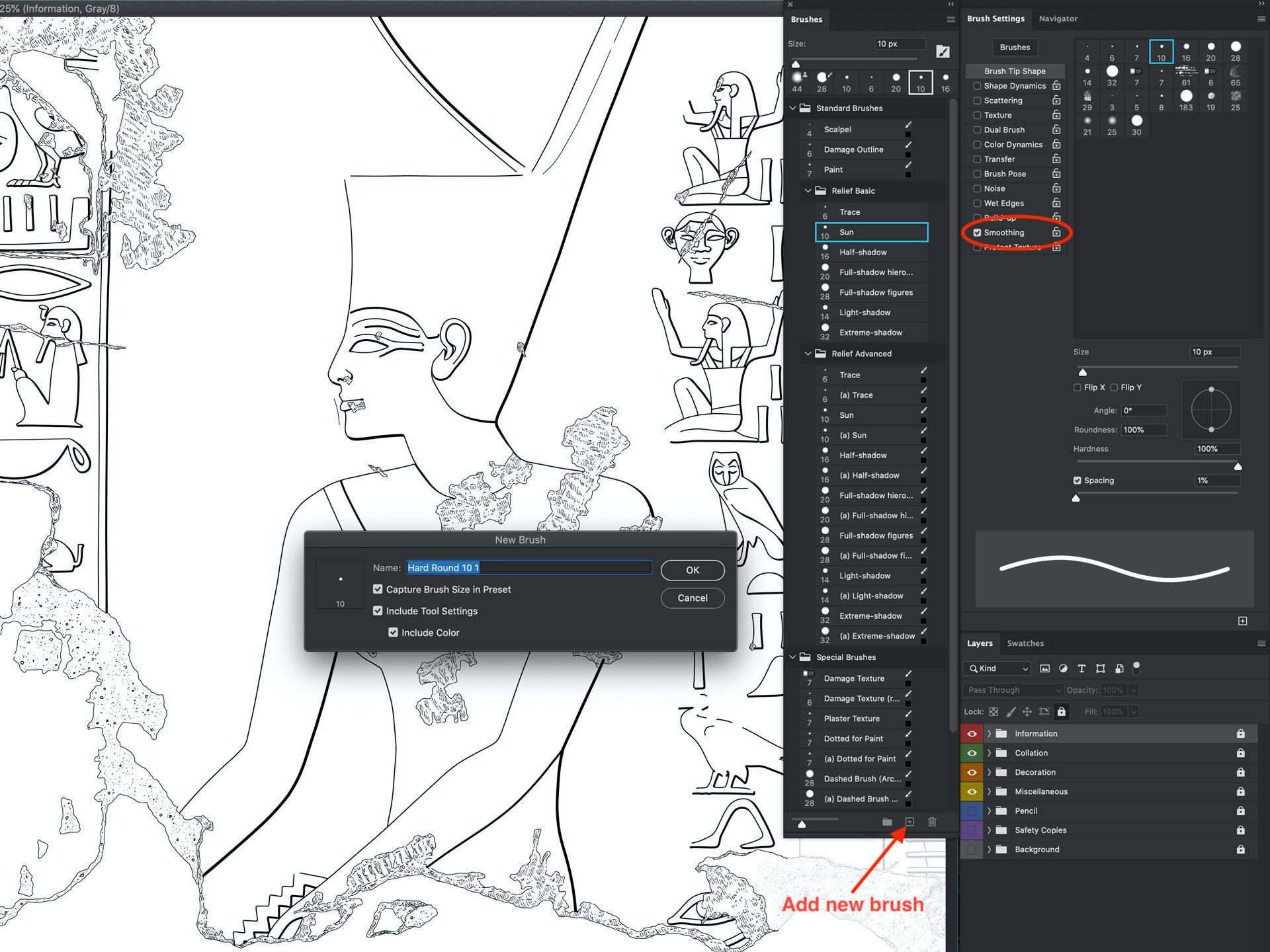 When adding our actual brush to a set, we have the option to save it including its current size, brush settings and color

Seeking for a resolution, digitalEPIGRAPHY started experimenting with redesigning the Survey’s brush set, specifying Smoothing information with each and every new brush. As a result, we came up with two versions of our regular ink brushes, one with Smoothing set to 0% and a variant set to 100%. The latter, assisted version, is distinguished by an (a) in the new naming system. The advanced brushes, exclusive to inking carved lines, have their size, smoothing and color preset. For brushes needed to be used in a quick, repetitive manner (such as Scalpel, Damage Outline, Damage Texture, Paint and Paint Texture), Smoothing is preset to 0%. Two of the Survey’s Special Brushes, Dotted for Paint and Dashed Brush are designed to have an assisted version as well, as they often used in sensitive fashion requiring more precision. The full set of Photoshop brushes, designed for the Survey’s digital inking process is to be shown below: 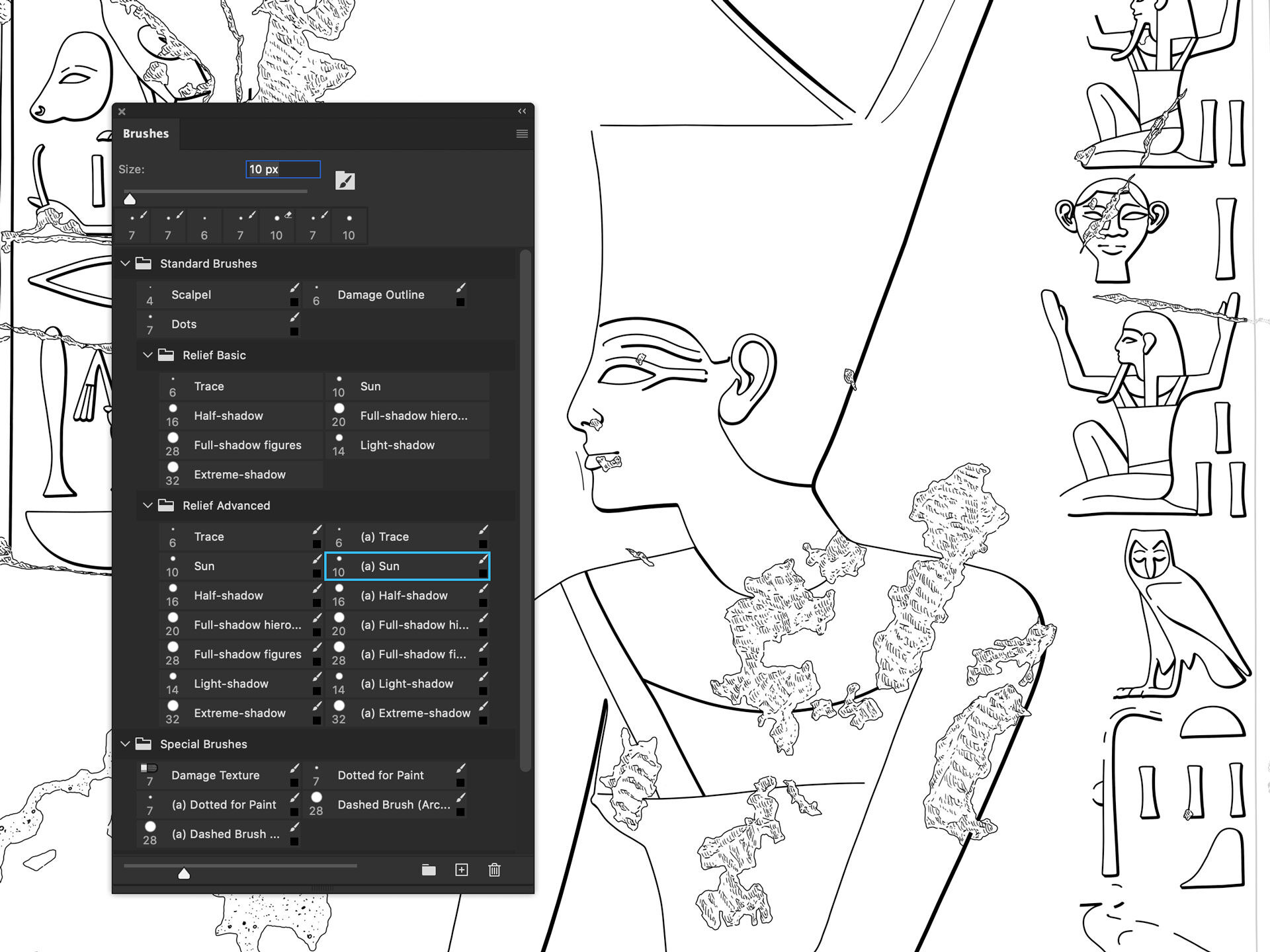 With the new, more advanced brushes in the mix, the artist has multiple choices to provide full control over his/her ink line quality. One can either stay with the basic set of ink brushes and use a shortcut to toggle smoothing or - alternately - eliminate this step all together and use the predefined advanced brushes. Either way, one has to make sure smoothing is set to 0% or disabled when using texture brushes, in order to avoid brush lag and unwarranted surprises. The Survey’s new, updated brush set can be downloaded here. With so many new options added, some might be turned down by the sheer number of brushes one has to manipulate now when inking in Photoshop. Nonetheless, you should remember, that switching between preset brushes doesn’t have to be tedious, you only have to know the right shortcuts! Switching between assisted and non-assisted versions of the same brush can be controlled by simply jumping back and forth between them using the following keyboard commands: “,” (Previous Brush) and “.” (Next Brush). Similarly, one can quickly jump to the very beginning or the very end of the brush list by pressing “<” or “>” respectively. 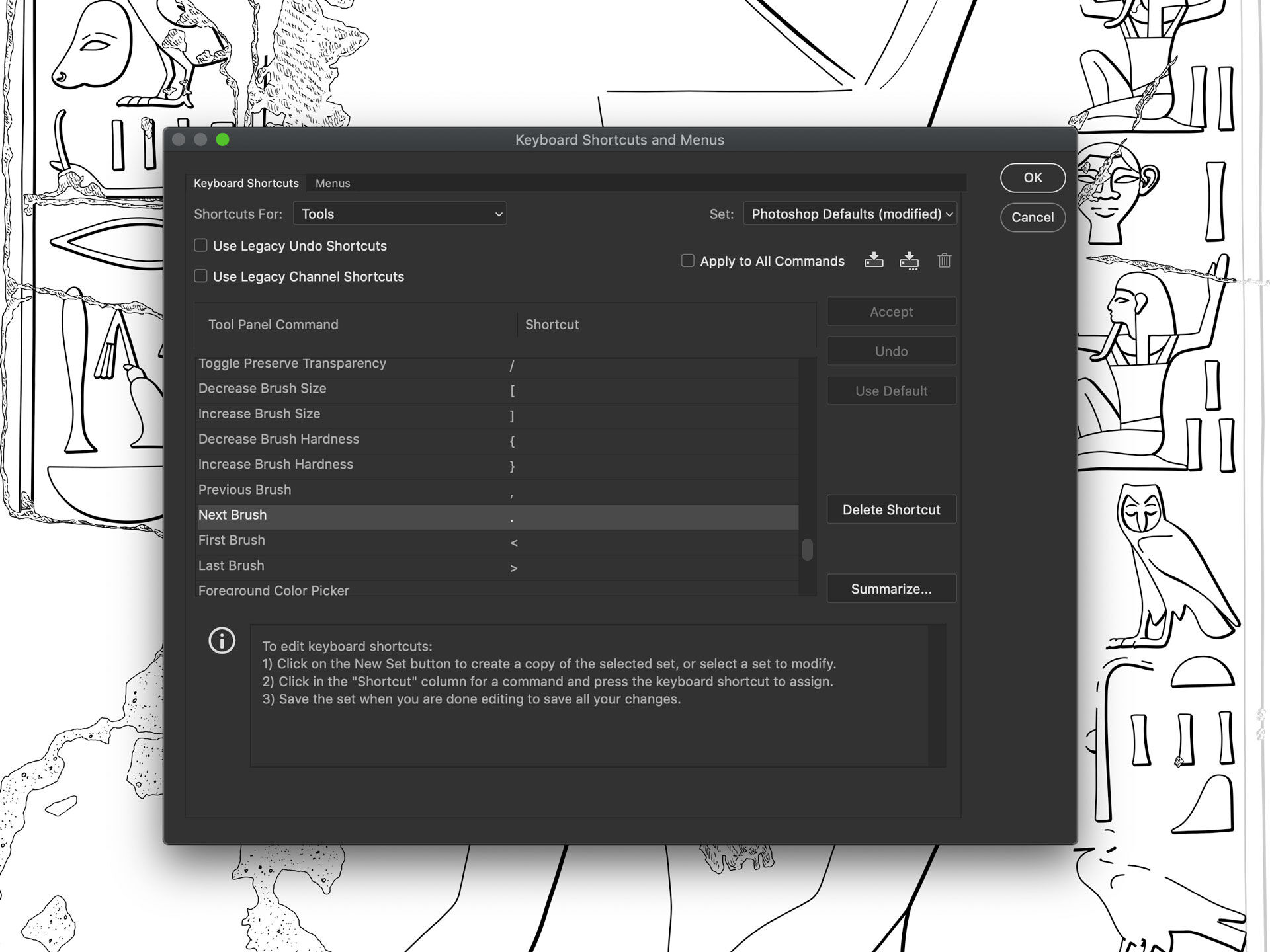 Finally, we’d like to mention one more preset related matter, that is the ability to save the color information with each individual brush. In the past, one had to create a custom palette (Photoshop Swatches) for a certain project. Now, Photoshop allows the artist to have the exact replica of any traditional drawing tool, customized down to its color and behavior, to be part of his/her repertoire. Obviously, this doesn’t have a tremendous effect on traditional line art, because the digital Chicago Method uses a 1200 dpi greyscale environment, where all brush strokes are black. However, not having to worry about the correct hue when using a certain tool becomes essential in cases when regular line art (representing relief) is mixed with color texturing (indicating pigment). Luckily, with Adobe refining their brush attributes and tool behavior, Photoshop is becoming the exact software powerhouse we hoped for in resolving our increasingly complex epigraphic problems. 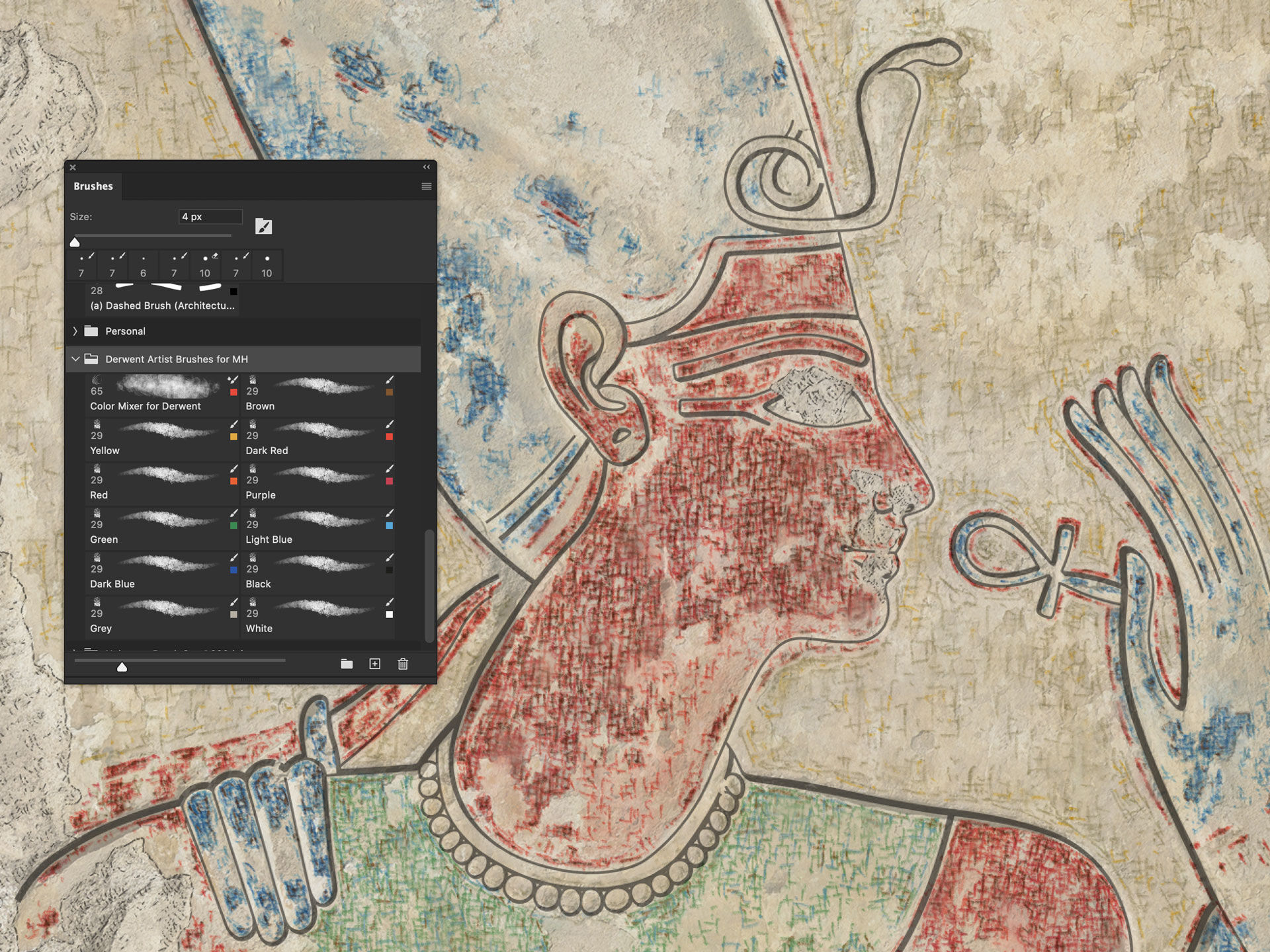 Preset color pencils, designed for indicating pigment preserved on the surface, are saved with their proper hues included 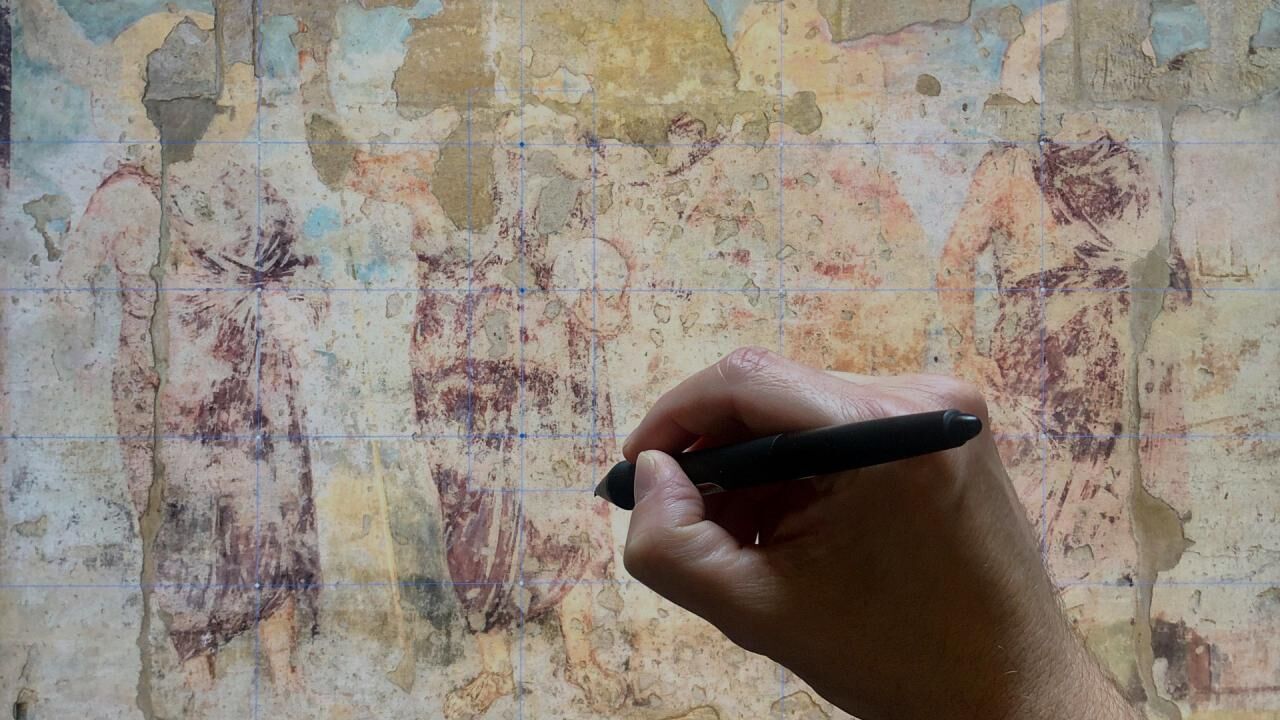 The Warp Transform Tool has been part of Photoshop for a long time, and it had remained mostly unchanged since its introduction until last year, when Adobe updated its Creative Cloud software suite for 2020. 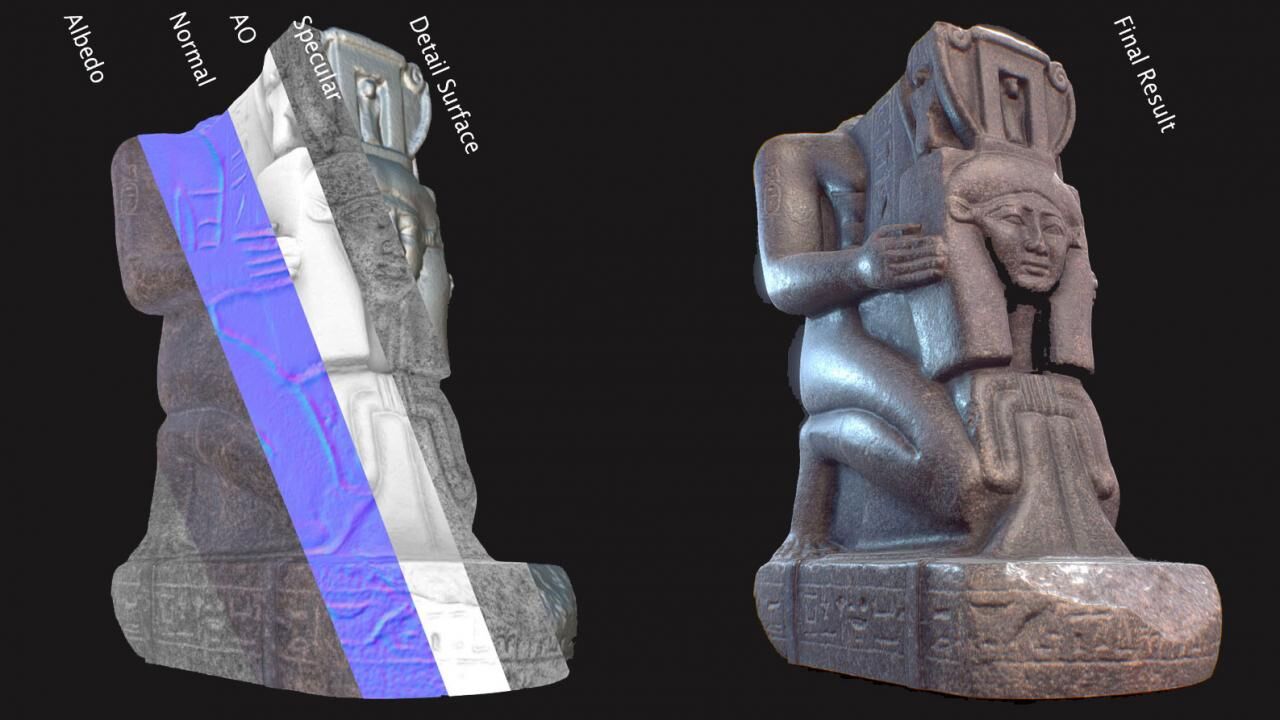 Physically based rendering (PBR) of Egyptian collection at Brooklyn Museum

The article surveys a number of new methodologies and applications of photogrammetry in Egyptology and Virtual Heritage in general. First, it presents methods for photorealistic rendering of virtual objects... 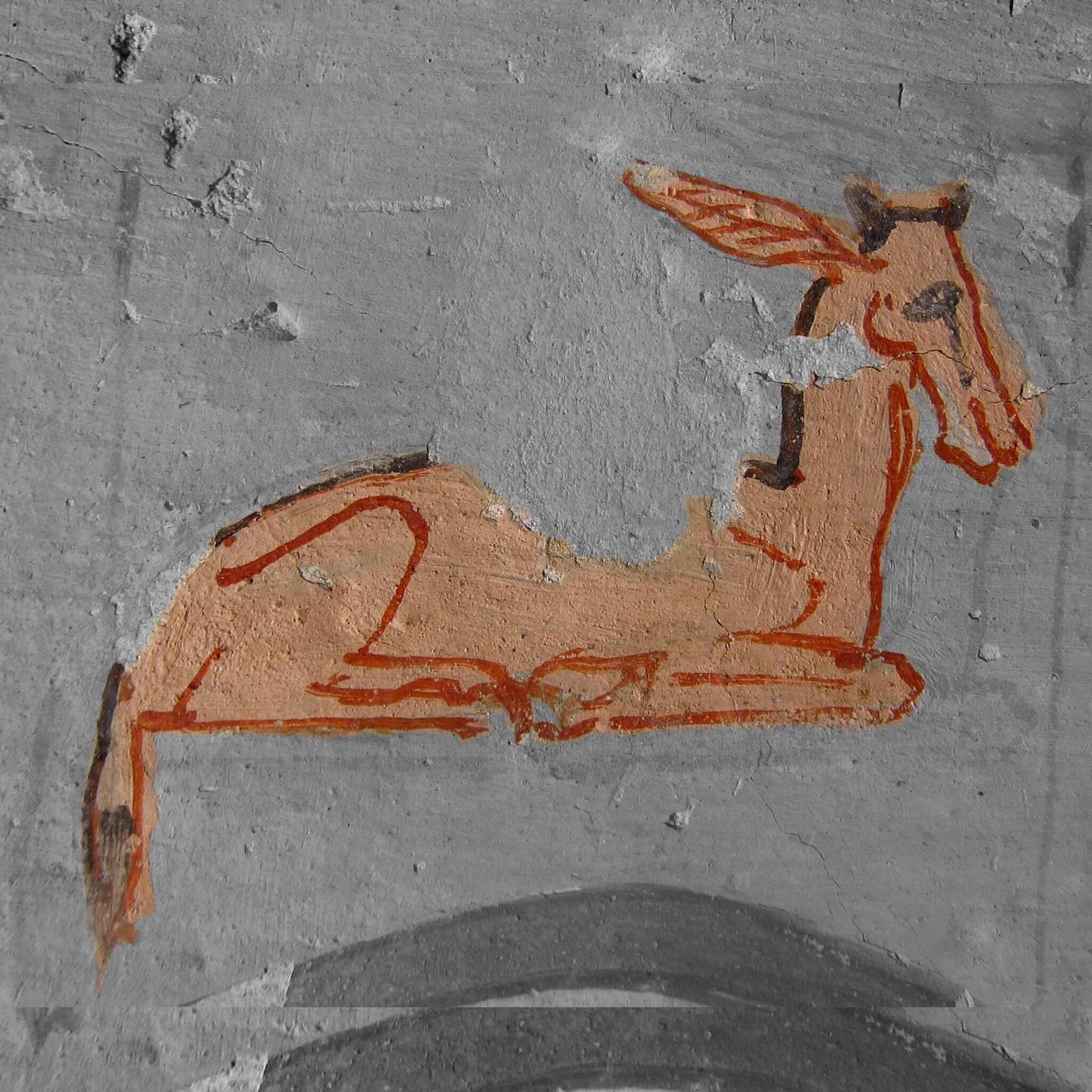 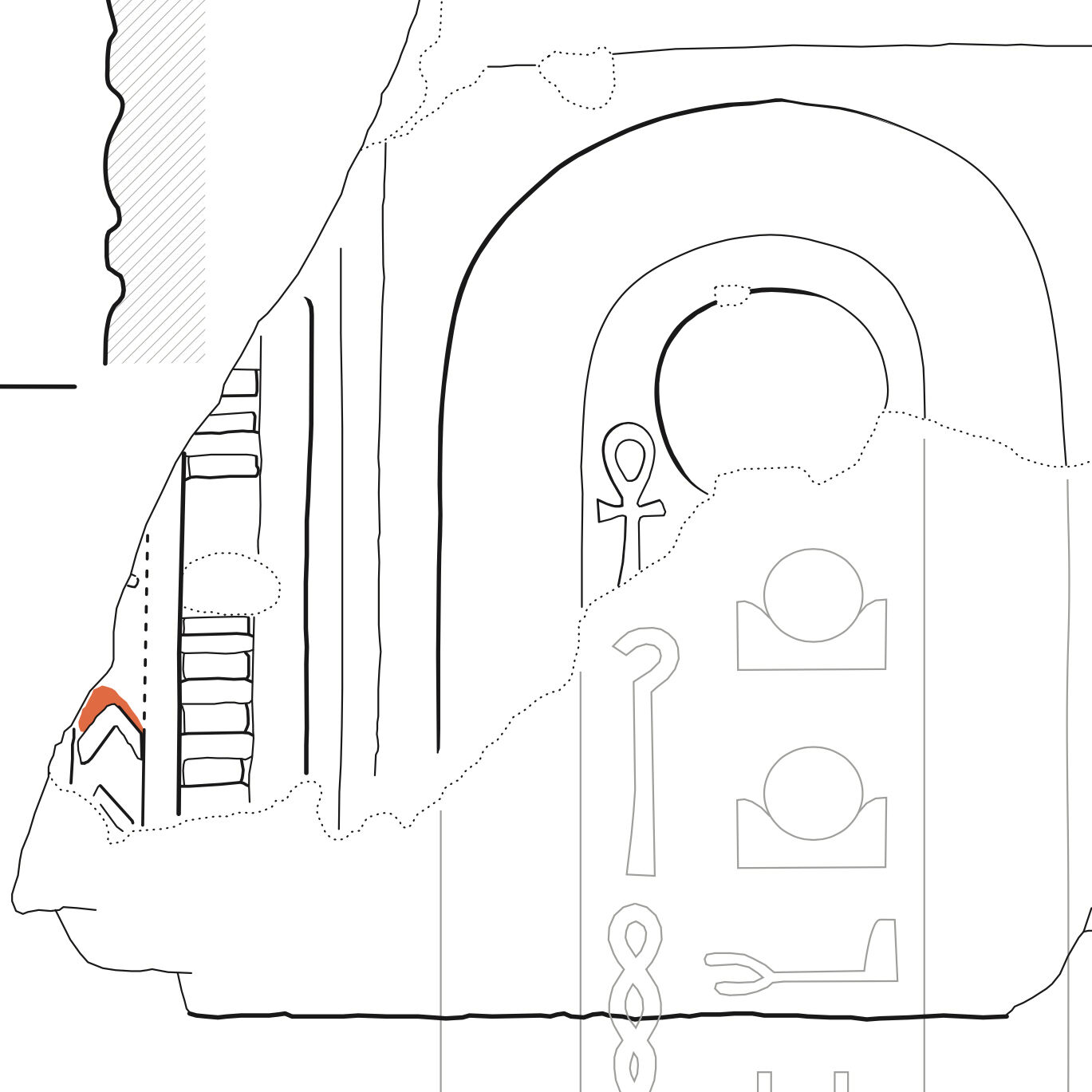