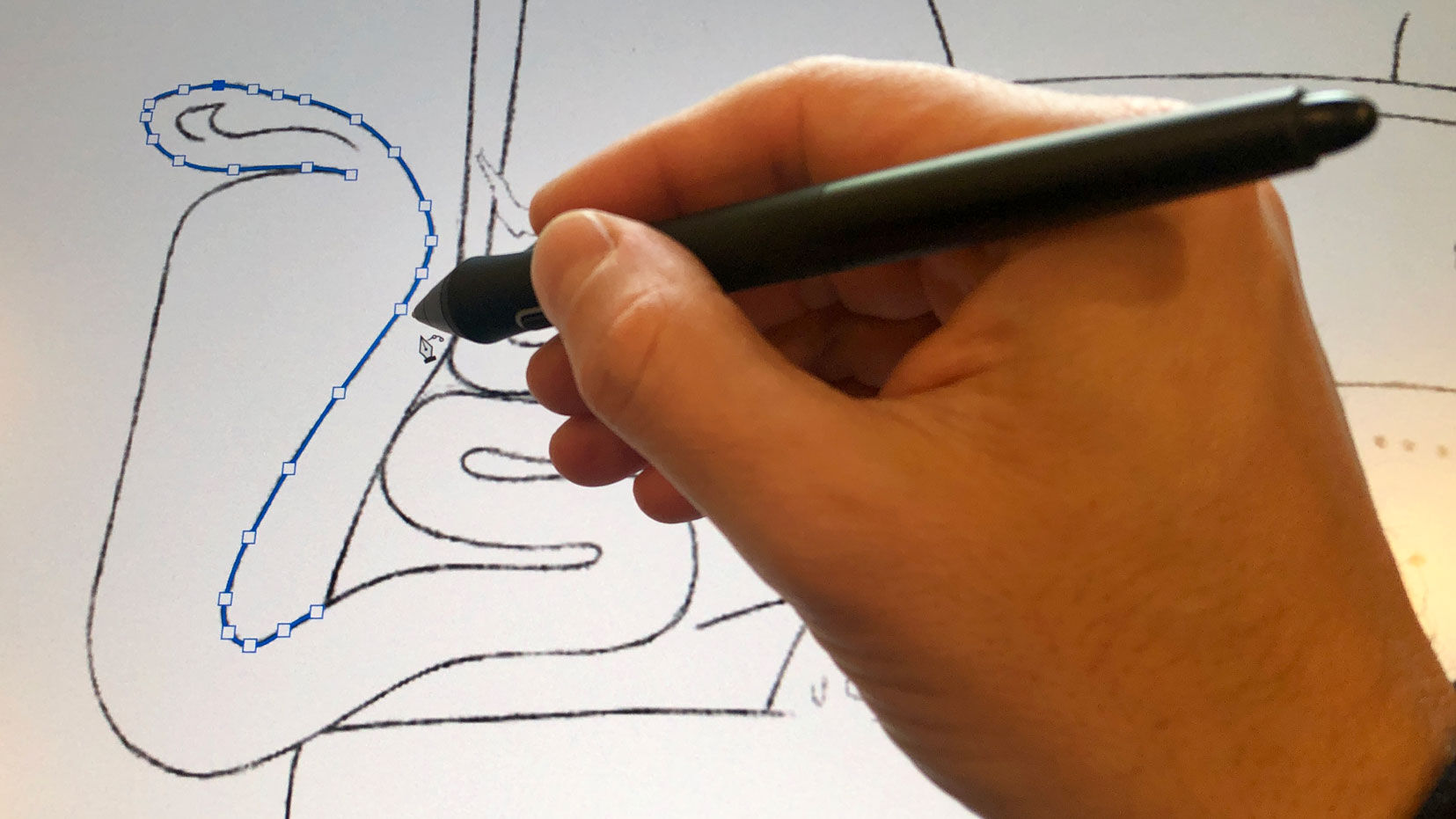 One of the most understated requirements of digital inking is the ability to be in full control of line placement and line quality. Obviously, ink line quality can be altered by several aspects as is often dictated by the publisher’s requirements. For example, if a drawing is intended to be distributed in relatively small size serving as a wall map, one might get away with less precise line placement and lesser line quality. However, when it comes to presenting close-ups of decorative areas, being able to control our digital brush strokes becomes indispensable. One of the most comfortable solutions to avoid the problems free-hand drawing might propose to line quality is turning towards a vector-based environment. Although we advise against trusting a computer to create the final inked lines for us, we don’t oppose implementing artificial aids to complement free-hand inking whenever necessary.

In this regard digitalEPIGRAPHY has already promoted the usefulness of Photoshop’s paths in many of our previous entries. Nonetheless, it is important to point out that fiddling with such a complicated tool as the Pen tool doesn’t belong to fieldwork. Although there are occasions when working on final layers using the desktop version of Photoshop at the monument can be rewarding, there are fundamental differences between the nature of drawing in the studio versus drawing in the field. While fieldwork is all about searching for the correct line placement and finding the closest semblance with the original artwork on the wall, studio work is intended to provide the best possible quality output of this initial pencilwork. To help the studio process, using Photoshop’s vector paths in digital inking is one of the backbones of the Survey’s epigraphic process. A lengthy description of this tool’s various implementations can be found in our relevant chapter of the digital epigraphy Manual.

The basic attributes of Photoshop paths 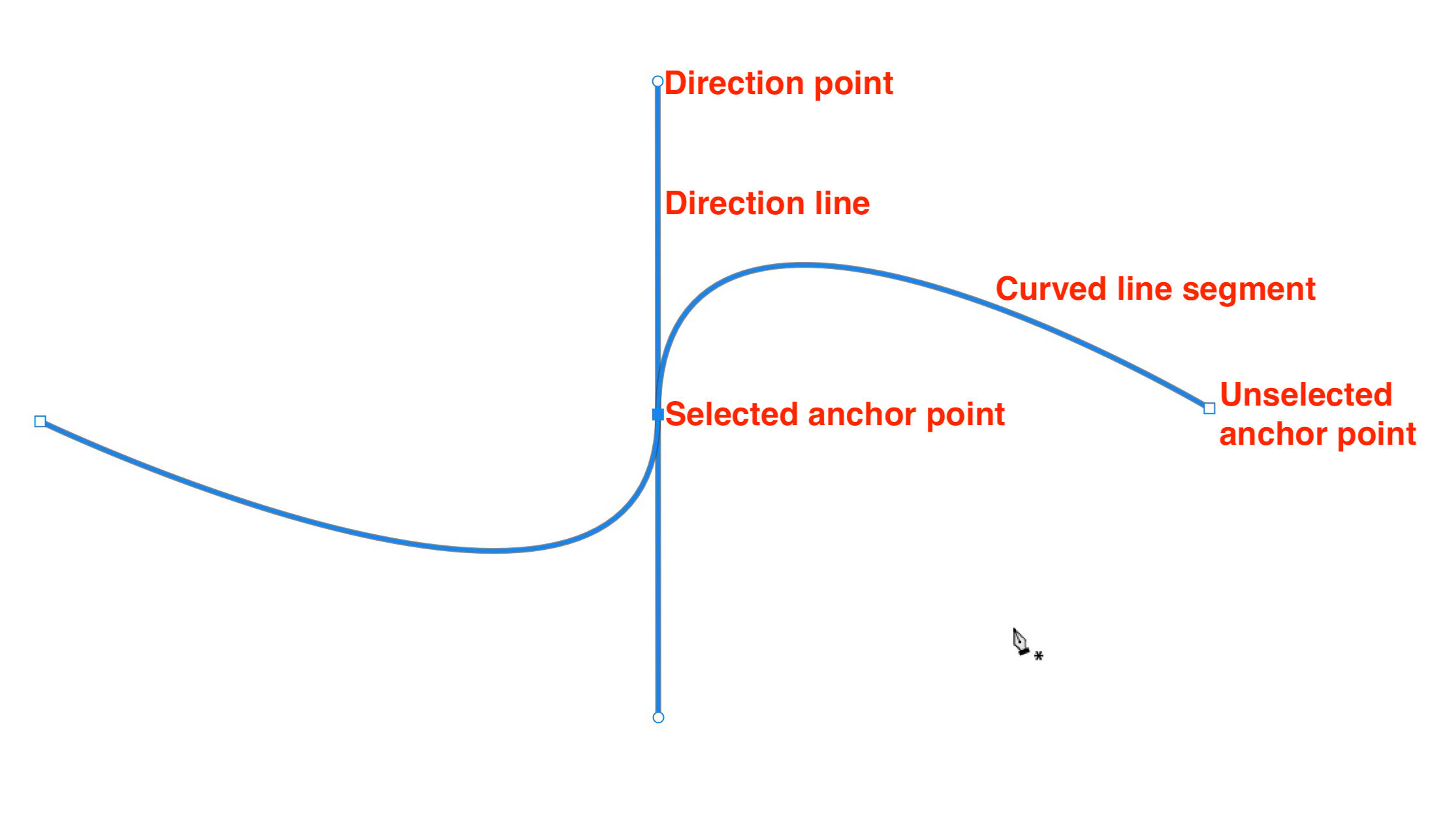 A Photoshop vector path and its main elements

In the forthcoming entry we’d like to give you a detailed tutorial about how to implement and refine your paths using various keyboard commands while setting up or modifying paths. First and foremost, we’d like to reiterate some basic knowledge by giving you a short summary of what paths represent in Photoshop. In its most basic description, a path consists of one or more straight or curved segments. Anchor points mark the end points of the path segments. On curved segments, each selected anchor point displays one or two Direction lines, ending in Direction points. The position of direction lines and points determines the size and shape of a curved segment. Moving these elements change the shape of the curves in a path. Naturally, a path can be closed, with no beginning or end (for example a circle), or open, consisting of separate end points (for example a wavy line). 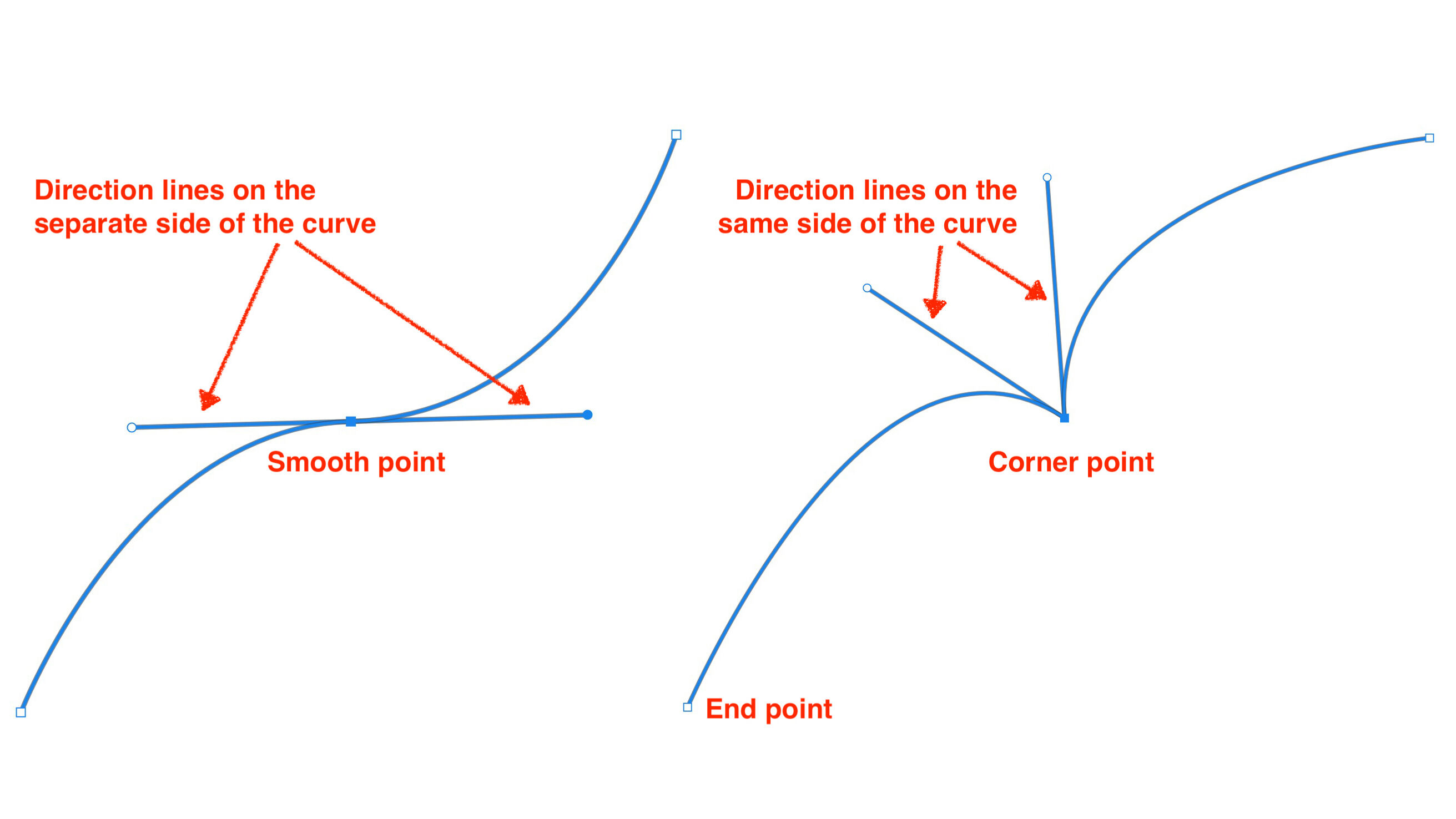 Anchor points don’t only occur at the end points of the curve but help us adjust the shape of the path as well. Curves can be smooth and sharply curved depending on how a path segment behaves around an anchor point. When you move a direction line on a smooth point, the curved segments on both sides of the point are adjusted simultaneously. By comparison, when you move a direction line on a corner point, only the curve segment on the same side of the point as the direction line is adjusted. To interact with a path, the path needs to be active, meaning that it needs to be selected. When selecting a path component or path segment (using the Path selection tool or the Direct selection tool by pressing A), it displays all the anchor points on the selected portion, including any direction lines and direction points if the selected segment is curved. One can quickly switch between the 2 selection tools by holding down Cmd while one of them is active (you should see the arrow changing from black to white as you hold Cmd). 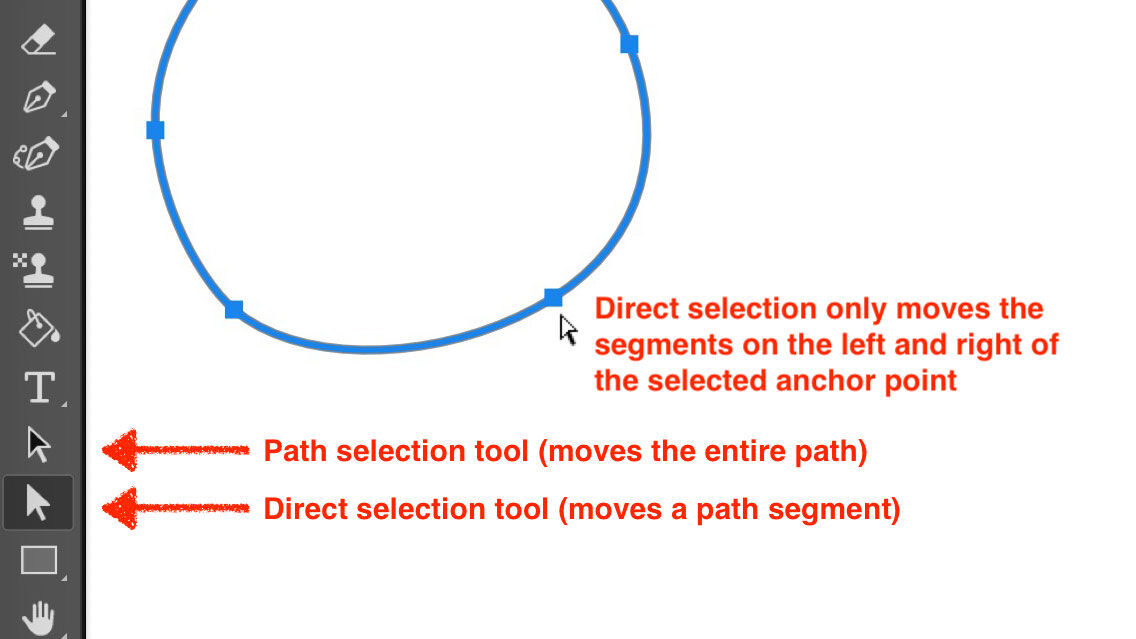 In the latest versions of Photoshop CC, one can define the color and thickness of the path lines for better visibility by clicking on the gear icon in the Options bar. Besides setting up color and thickness, you can also preview path segments as you move the pointer between clicks by checking the box called Rubber Band. With the basic attributes described, let’s see how the interaction goes with path segments as we ink our drawings. 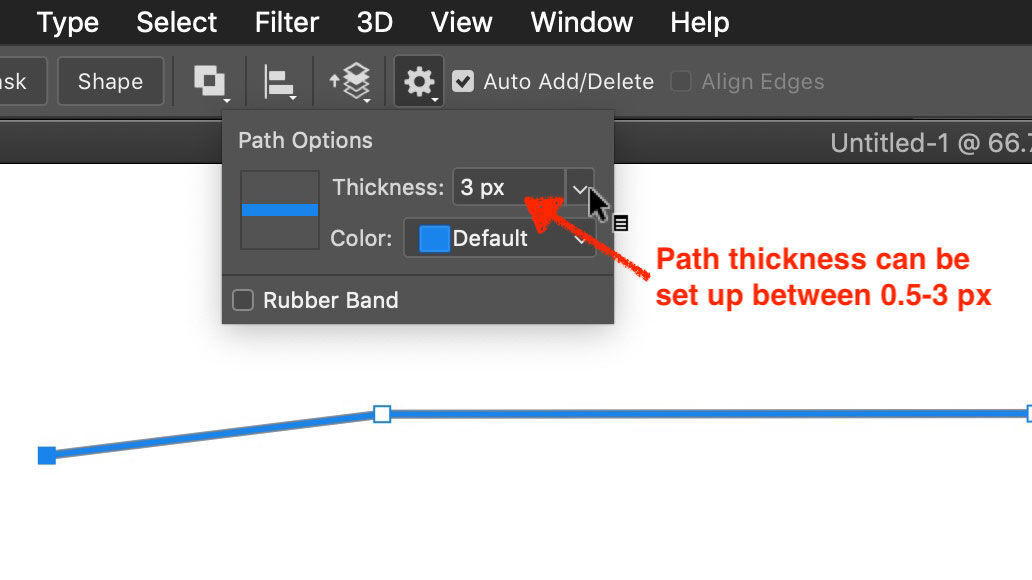 We need to keep in mind 3 important rules when it comes to adjusting paths. First, moving an anchor point that connects 2 path segments always modifies both. Second, it is possible to go back and adjust a previously drawn segment as we lay down the path by temporarily activating the Direct selection tool (press Cmd) while drawing. Finally, when we initially draw a smooth point with the Pen tool, dragging the direction point changes the length of the direction line on both sides of the point. However, when we edit an existing smooth point with the Direct selection tool, we can change the length of the direction line only on the side we’re dragging. With that said, adjustments of a path segment or anchor point always involves using the Direct selection tool (press and hold Cmd). To adjust the position of a segment you need to directly drag the segment itself, while to adjust the shape of the segment on either side of a selected anchor point, you need to drag the anchor point or the direction point. 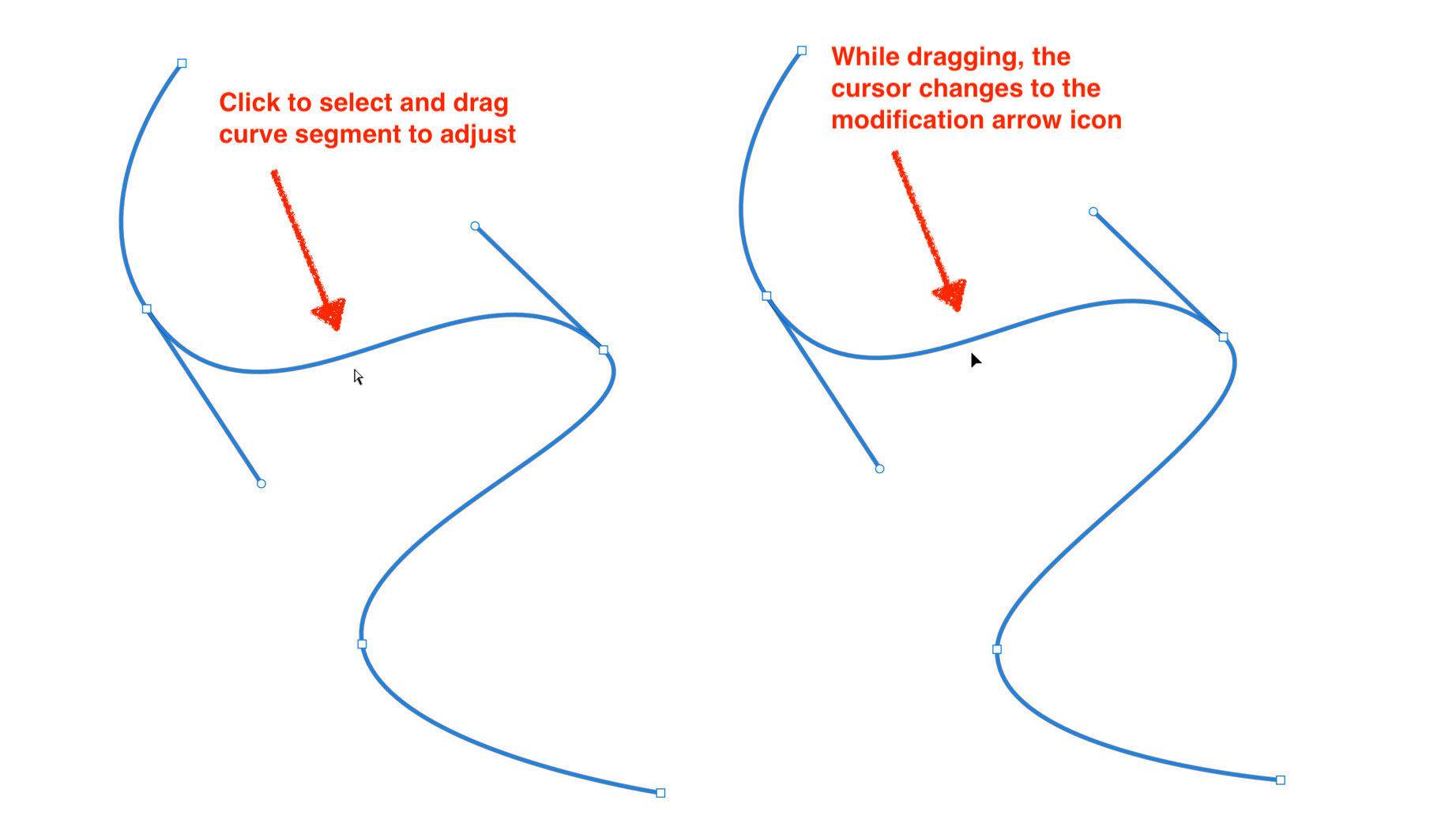 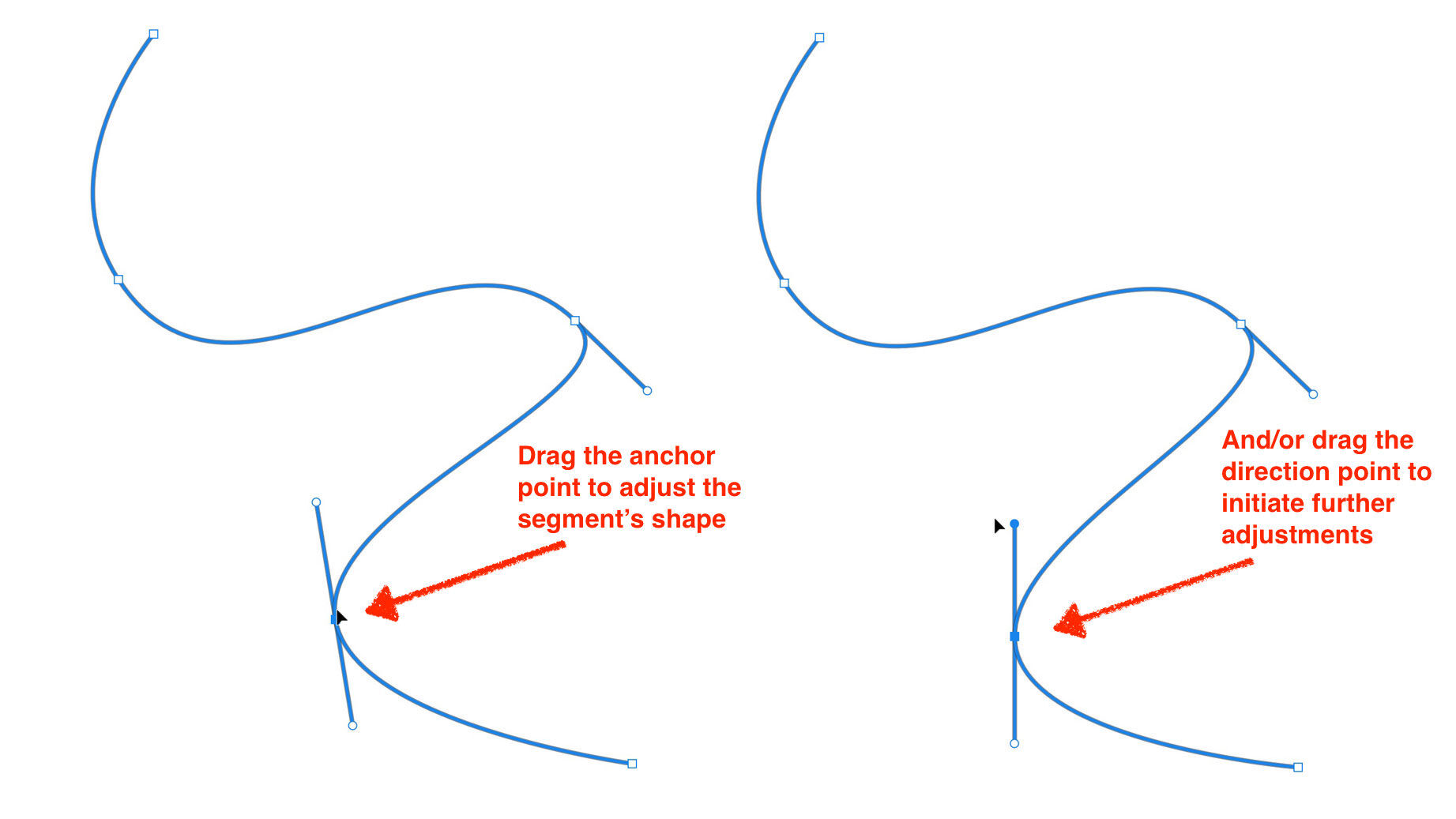 If necessary, we can easily delete a segment within a longer path (for example when we don’t need to add a brush stroke over a certain path section) by selecting the segment with the Direct selection tool and hitting Delete. If more specification is needed, we can add the end points of the cutout by adding more anchor points to the path first. On the other hand, when we need to extend an existing path, we can do so by clicking on the end point of the path using the Pen tool than clicking on the point where we want to end the new segment. This new segment will be a straight section between the 2 points unless you click and drag immediately while laying down the new end point. Another important interaction one can initiate by using the arrow keys on the keyboard is to fine tune anchor point placement and the shape of your path segment. Click or hold down any of the arrow keys on the keyboard to move 1 pixel at a time in the direction of the arrow. 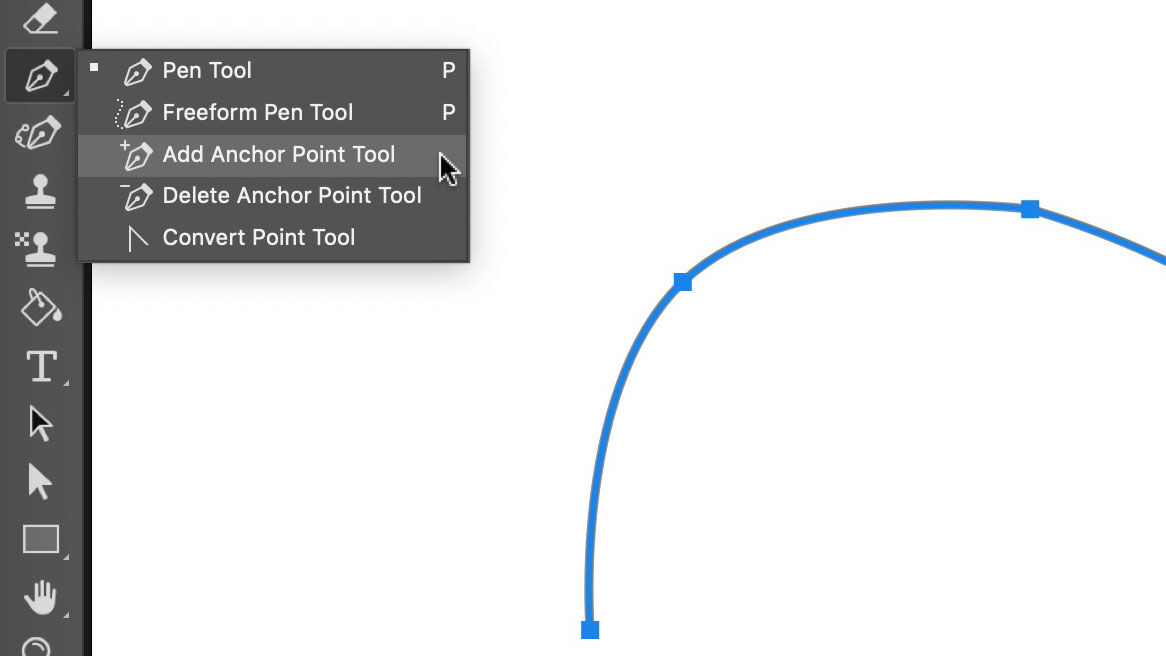 Adding anchor points not only extends an open path but also gives you more control over an existing path. However, you should avoid adding more points than necessary. A path with fewer points is easier to edit, display, and results in smoother curves. If your path is overwhelmed by anchor points, you can reduce the complexity of a path by deleting unnecessary points. The toolbox contains three tools for adding or deleting points: the Pen tool, the Add Anchor Point tool, and the Delete Anchor Point tool. By default, the Pen tool changes to the Add Anchor Point tool as you hover over a selected path, or to the Delete Anchor Point tool as you position it over an anchor point assuming Auto Add/Delete in the options bar is enabled for the Pen tool. It is important to remember not to use the Delete key when deleting anchor points because it will delete both the point and the line segments that connect to that point.

One of the highlights of Photoshop CC 2018 was the introduction of the new Curvature Pen Tool. The Curvature Pen Tool, as we indicated in our tutorial, is a simplified version of Photoshop's standard Pen Tool. It lets one draw complex shapes and paths without the need to edit control handles or remember keyboard shortcuts all together. Using the Curvature Pen Tool is as easy as clicking to add points, which are then used for automatically drawing the path. Reshaping an existing path is just as easy, as we can easily go back to any point of the path and reshape it. A basic modification option is offered by clicking on an existing anchor point with the Curvature Pen Tool to select it, and then dragging the point to a new location. A more complex modification method would be to add more anchor points to an existing path simply by pointing and clicking along a path outline then dragging the new points to reshape the path. The same selection rules described above for the Pen tool apply to the Curvature pen tool as well: if you want to move one section without the entire path being affected, you’ll have to use the Direct selection tool to do so. 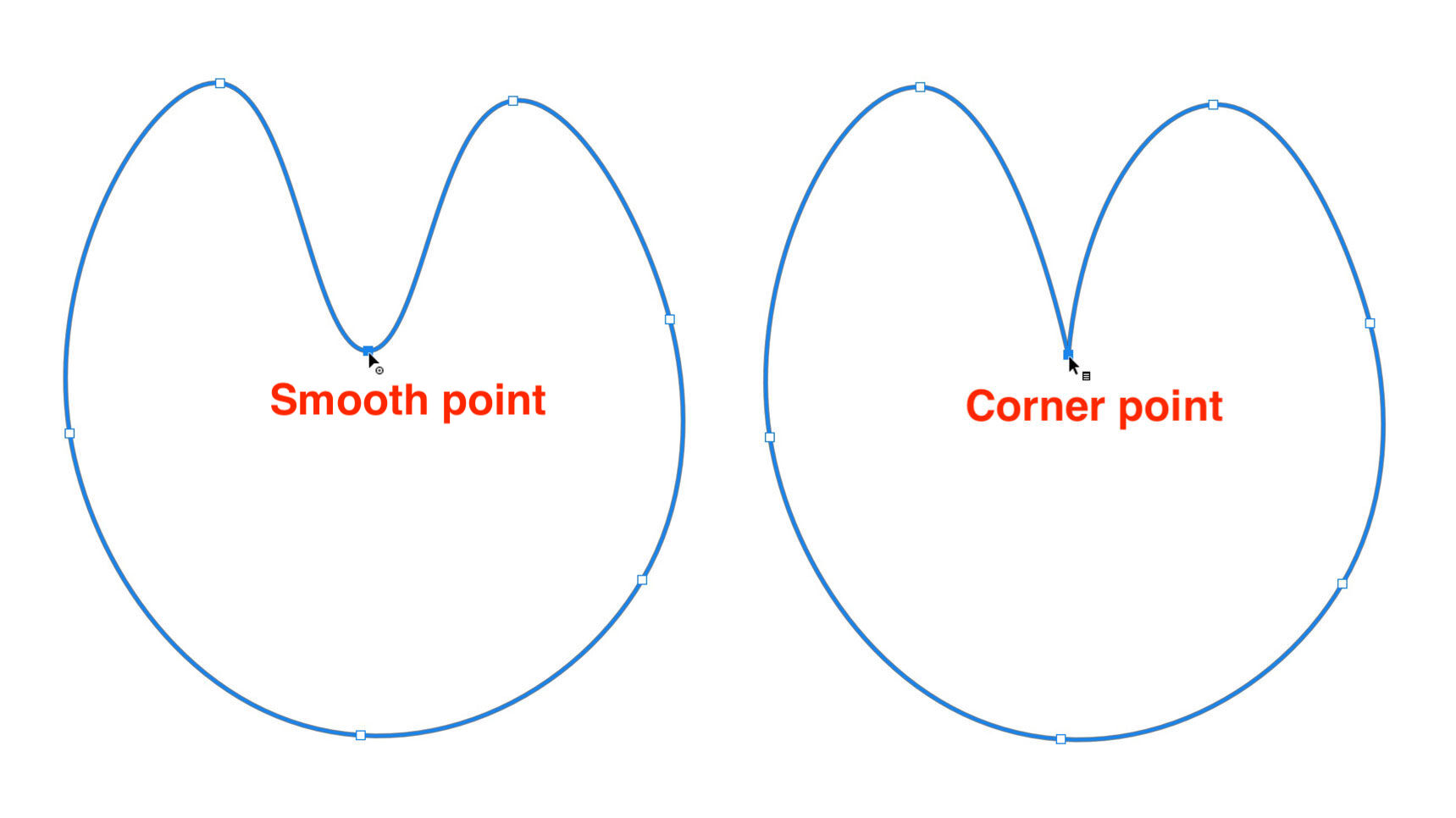 All the anchor points we add with the Curvature Pen tool become Smooth points, unless we specifically double-click while adding the next point which adds straight path segments instead of curves. With more points added, the path outline curves as it passes through the point. A very simple way to change the shape of a path from smooth to angular is by converting a curve point into a corner point. To switch from a curve point to a corner point, all you need to do is double-click on an existing curve point (to switch back from a corner point to a curve point, again just double-click on the point). Another convenient way of using the Curvature Pen tool over the regular Pen tool is that you can simply use the Delete key to delete an anchor point. At the end, we would like to arm you with a few useful keyboard shortcuts to speed up your workflow while drawing with the Curvature Pen tool: 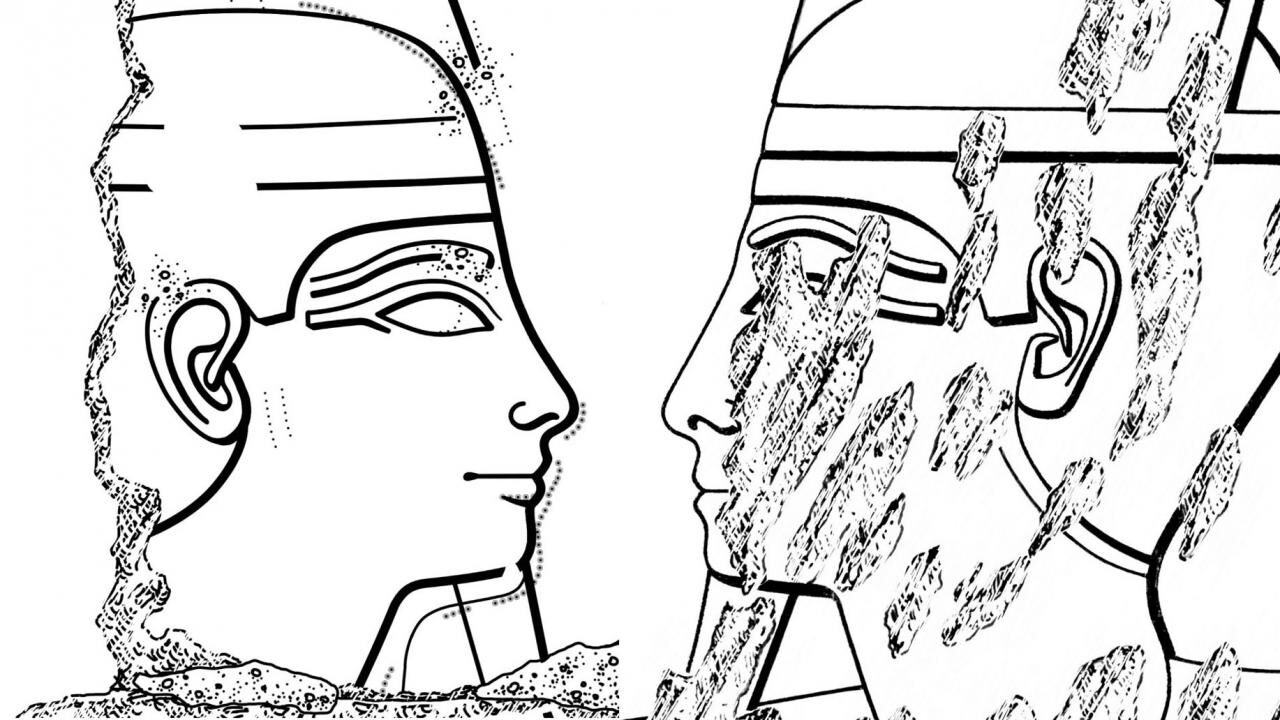 In this new series of tutorials, digitalEPIGRAPHY would like to draw your attention to the importance of stylistic accuracy in epigraphic documentation by focusing on the representation of a common feature, the human ear. 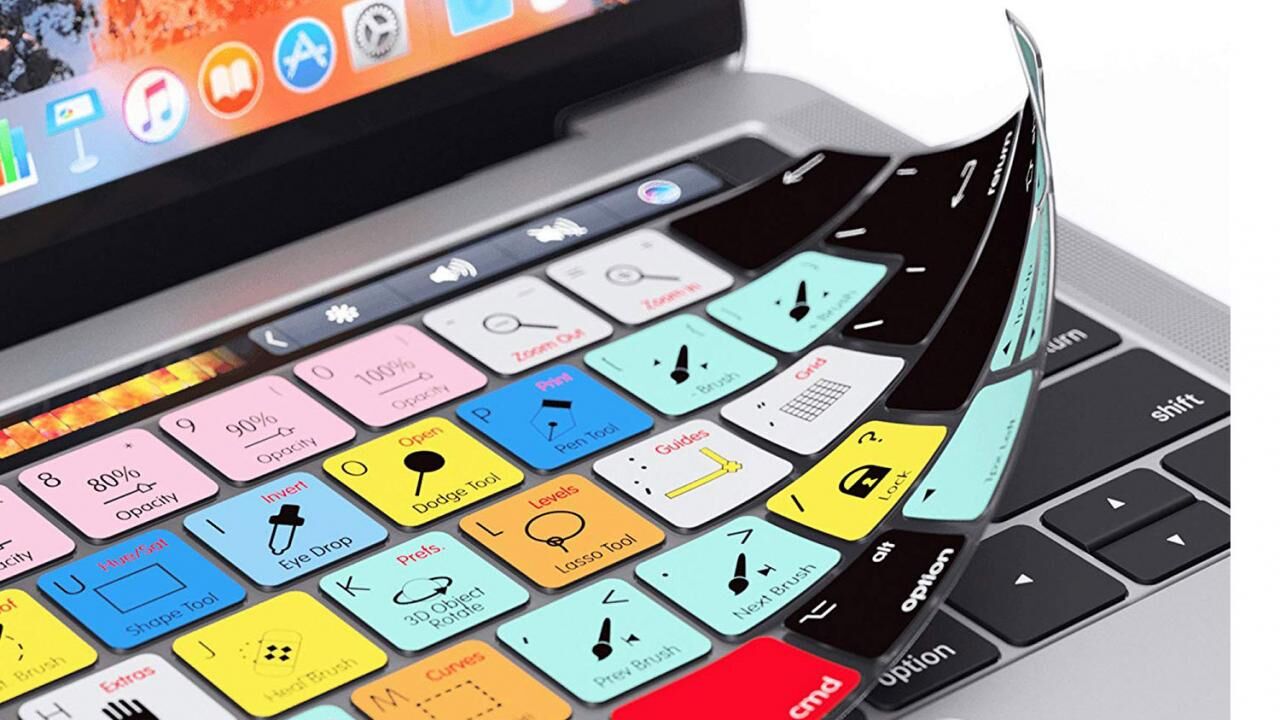 To be able to effectively use Photoshop in the studio, one needs to create a perfect personal workflow. While the same results can often be achieved by using different methods, the amount of time and effort it takes to accomplish your goals highly matters.