On Monday, during its annual WWDC conference keynote, Apple confirmed a new feature coming in the next macOS (Catalina) called Sidecar. As long-time Astropad users, we already covered the prospects and possible benefits of connecting our iPads wired or wirelessly to act as a second display, however, the additional benefits of system-wide integration are very tempting. Now that the first developer beta of macOS Catalina has been released, we were able to collect some more information about Apple’s take on Astro’s solution. Let’s see how Sidecar is going to work and how digital documentation might be able to harness this new feature with the next operating system’s public release in the Fall.

To use Sidecar, one will need an iPad (any iPad, even the Mini works!) running the next generation operating system (called iPadOS and also coming in the Fall as a free update) and a Mac (2015 or newer MacBook, iMac, Mac Mini or Mac Pro) running macOS 10.15 Catalina. Activating the feature doesn’t require any additional software or fiddling around with settings, all you need is clicking on the AirPlay menu on the Mac’s menu bar. If your iPad is either on and near your Mac or plugged in with a Lightning or USB-C cable, it should appear in this menu. By clicking on your device in the list, both displays will refresh, and you should see your Mac desktop extended to the iPad's display in a matter of mere seconds. As was demonstrated by AppleInsider in the video below, the transition is very speedy with seamless graphics, even when the iPad is connected wirelessly. However, you can’t just unplug your iPad to go wireless, as doing so will disconnect the display and will require you to quickly reconnect once again through the AirPlay menu.

Sidecar has numerous essential features designed for digital creatives working with multiple devices, and digitalEPIGRAPHY collected some of the key uses Apple lists on their preview website:

Extended desktop - Use your iPad as a second display for additional screen space. Refer to one app while you work in another or see how a presentation looks in presentation mode on your iPad while editing it on your Mac.

Mirrored desktop - Mirror the screen on your Mac to have two screens displaying the same content, making it perfect for sharing with others.

Wired or wireless - Connect your iPad to your Mac using a cable to keep it charged or use it wirelessly — within 10 meters — for greater mobility.

Draw and sketch in apps - Use the precision and intuitiveness of Apple Pencil with your favorite creative Mac apps. Draw and write naturally, edit a photo or graphic, and use it to point and click as you do with a mouse.

Gestures - Use the same Multi-Touch gestures you’re familiar with on iPad, along with all-new text editing gestures that let you cut, copy, paste, and undo without lifting your hands from the onscreen keyboard.

Sidebar - Get easy access to your most commonly used controls from the sidebar. Use modifier keys to enable shortcuts in pro apps, and access buttons that allow you to undo as well as display or hide the menu bar, Dock, and keyboard.

Touch Bar - For apps with Touch Bar support, the controls appear at the bottom of your iPad screen — even if your Mac doesn’t have a Touch Bar. 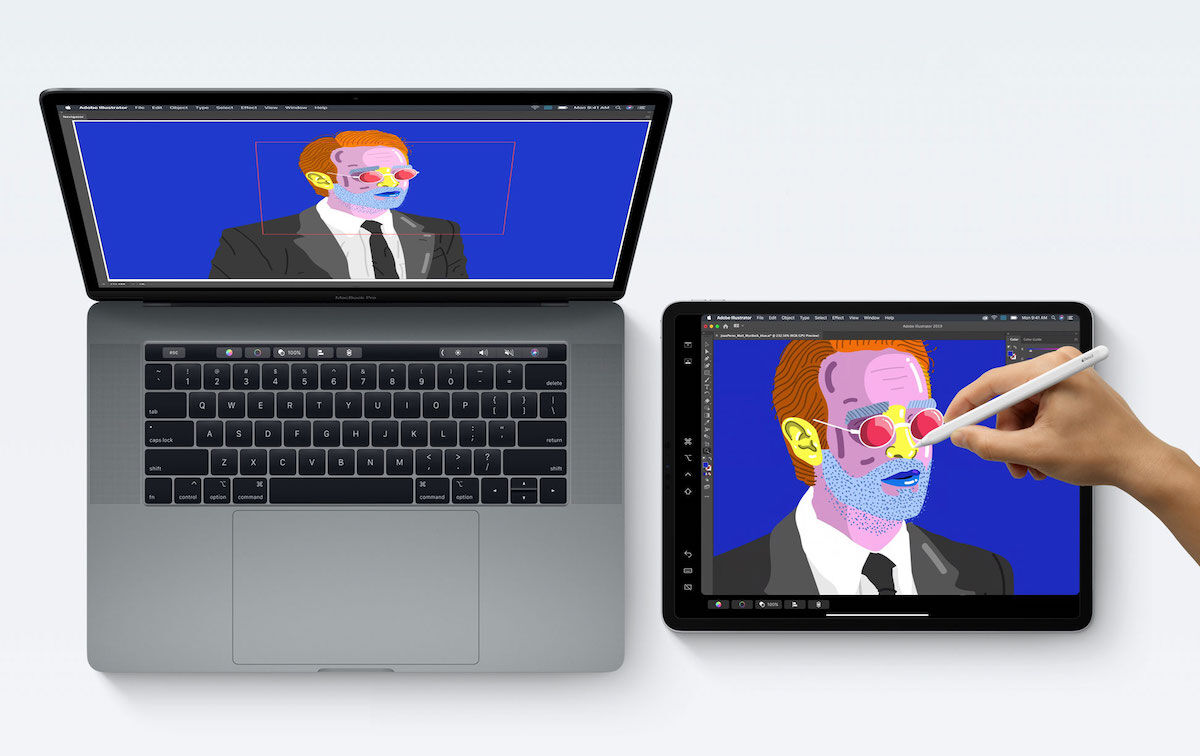 When activated, Sidecar has a minimal UI addition to the iPad interface with two bars appearing on one side and the bottom. The sidebar accommodates the most common modifier keys (Command, Shift, Option and Control) along with shortcuts to call up the on-screen keyboard, disconnect from your Mac and move the Mac Dock to the iPad. The bottom bar is a mirrored version of the MacBook Pro’s Touch Bar displaying information and shortcuts relevant to the software you’re using, and it appears regardless of having a Touch Bar equipped computer or not. These bars can be moved to the left or to the right and to the top and to the bottom respectively or turned off all together, depending on your preference. Disabling the bars in Sidecar’s System Preferences panel allows your Mac's desktop to be displayed full-screen on the iPad. Also, from System Preferences, you can enable or disable the double-tap functionality of the Apple Pencil. 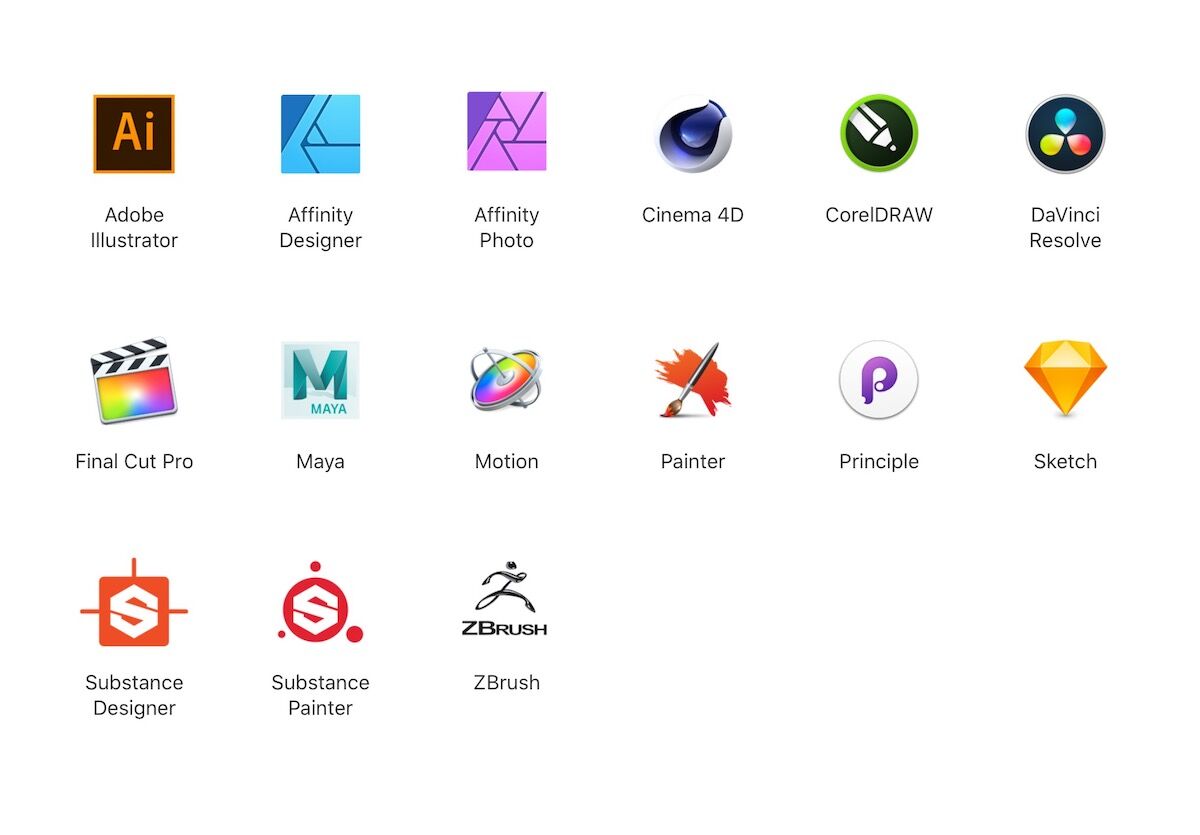 Apps, listed by Apple that have already confirmed support for Sidecar (Photo by Apple)

Most importantly for digital epigraphy, Apple Pencil works great with Sidecar, whether just controlling the cursor and navigating the UI or in specific artistic applications that can make use of a tablet. While the main features of Sidecar will work out of the box on day one, developers will be able to add special support enabling a much more robust feature set, like pressure sensitivity and tilt support for Apple Pencil. As we look at the above list of apps, one notable omission is Adobe’s Photoshop, which might have something to do with Photoshop CC coming to the iPad later this year. This doesn’t mean that we won’t be able to use desktop Photoshop with Sidecar but might mean a less tailored experience compared with the apps listed by Apple.

Initially, when rumors started circulating about Sidecar, it was only natural to conclude that Apple was outright replicating the features of Luna Display, Astro HQ’s excellent hardware/software combination. Theoretically, Sidecar will eliminate the need to buy dedicated hardware and pay for a subscription (Astropad Studio is currently $79.99/year) for those wanting to use desktop apps on their iPad. However, as Apple integrates popular features, it’s always trying to get the most return for its investments by building features that appeal to the widest possible set of users. That generally leaves space for third-party apps to court pros who’d want additional features and more flexibility in customization.

Although Luna Display was originally envisioned to provide a seamless second-screen experience on the iPad, it quickly became the best tool to let iPad users control a Mac on the local network. Astropad Studio goes even further by adding customizable shortcuts and wide-spread touch control to the mix. Furthermore, you won’t be able to initiate a session with Sidecar from an iPad - it’s a Mac feature that is always initiated from a Mac. In addition, Sidecar is basically a Continuity feature of macOS, meaning that it uses both Bluetooth and Wi-Fi to sense the nearby presence of the device setting a limited range. What it means for us is that Sidecar can’t be used wirelessly beyond about 10 meters from the host Mac, while Luna Display works anywhere on the local Wi-Fi network. However, what could be the most appealing feature of Sidecar over any kind of third-party solutions is it’s being baked in macOS for free to try out and use to your liking.

In a somewhat related news, Astro HQ quickly reacted to Apple’s announcement shedding some light to their plan to bring Astropad to Windows PCs. In the meantime, Astropad Studio’s latest update further reduces pixelation when connected over strong Wi-Fi networks or USB cable, giving us crystal clear image when inking on the iPad tethered to desktop Photoshop.

This is extremely exciting news! 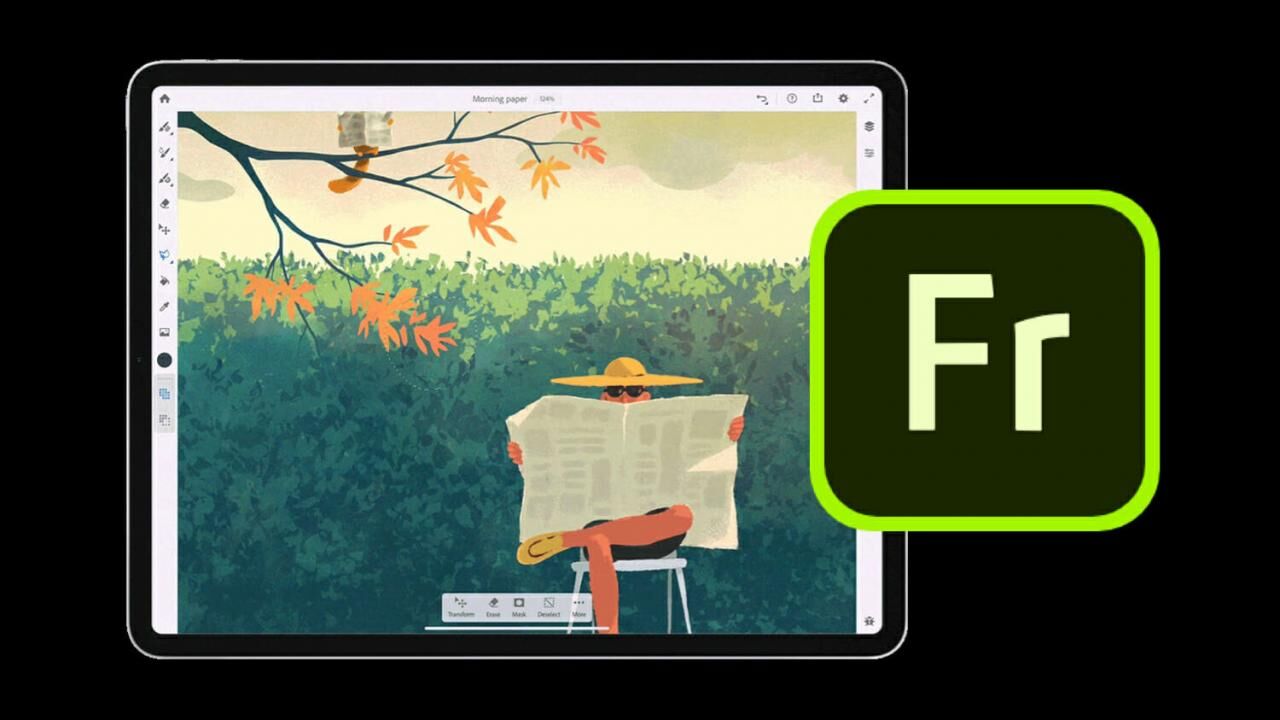 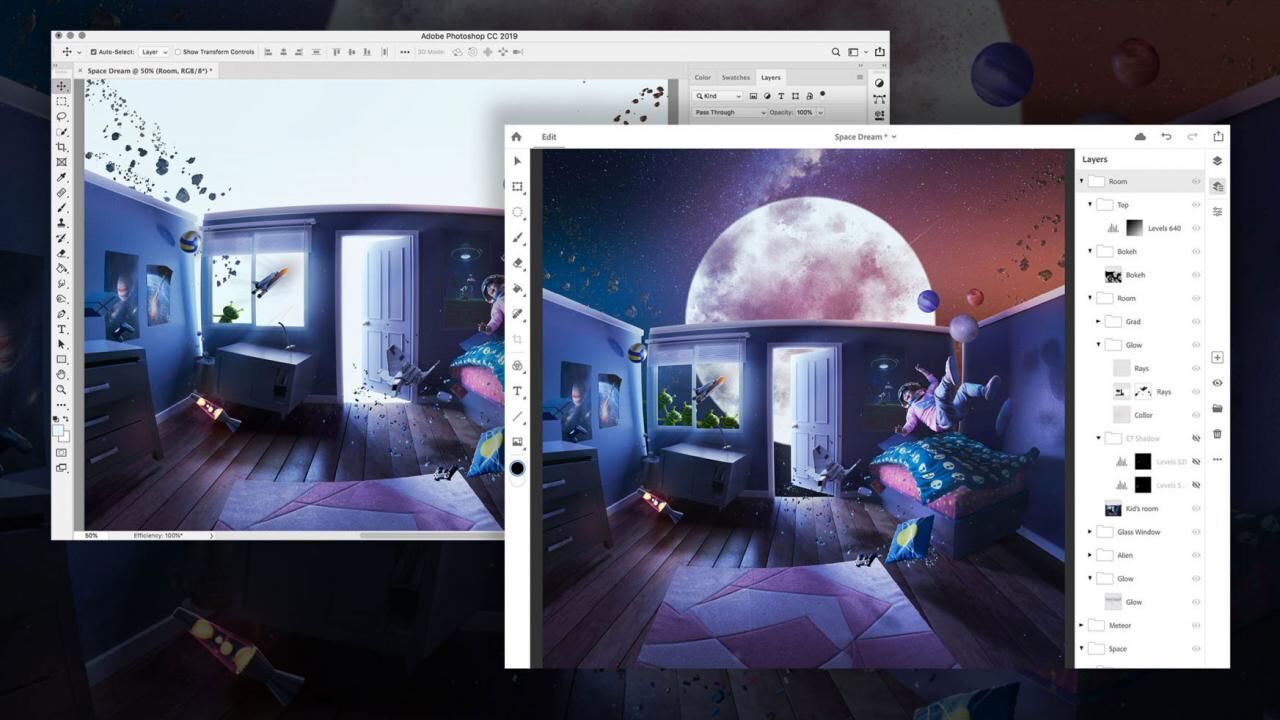 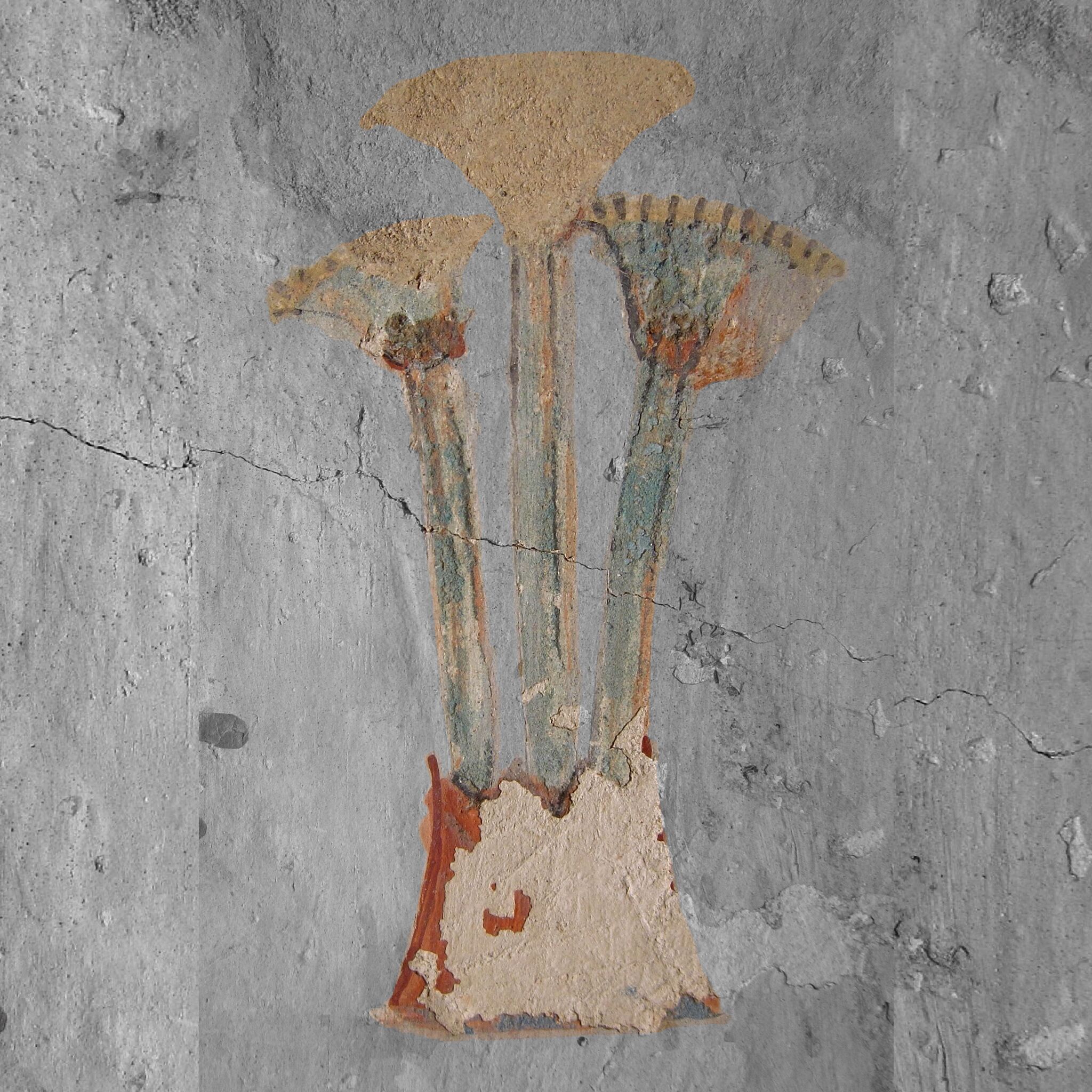 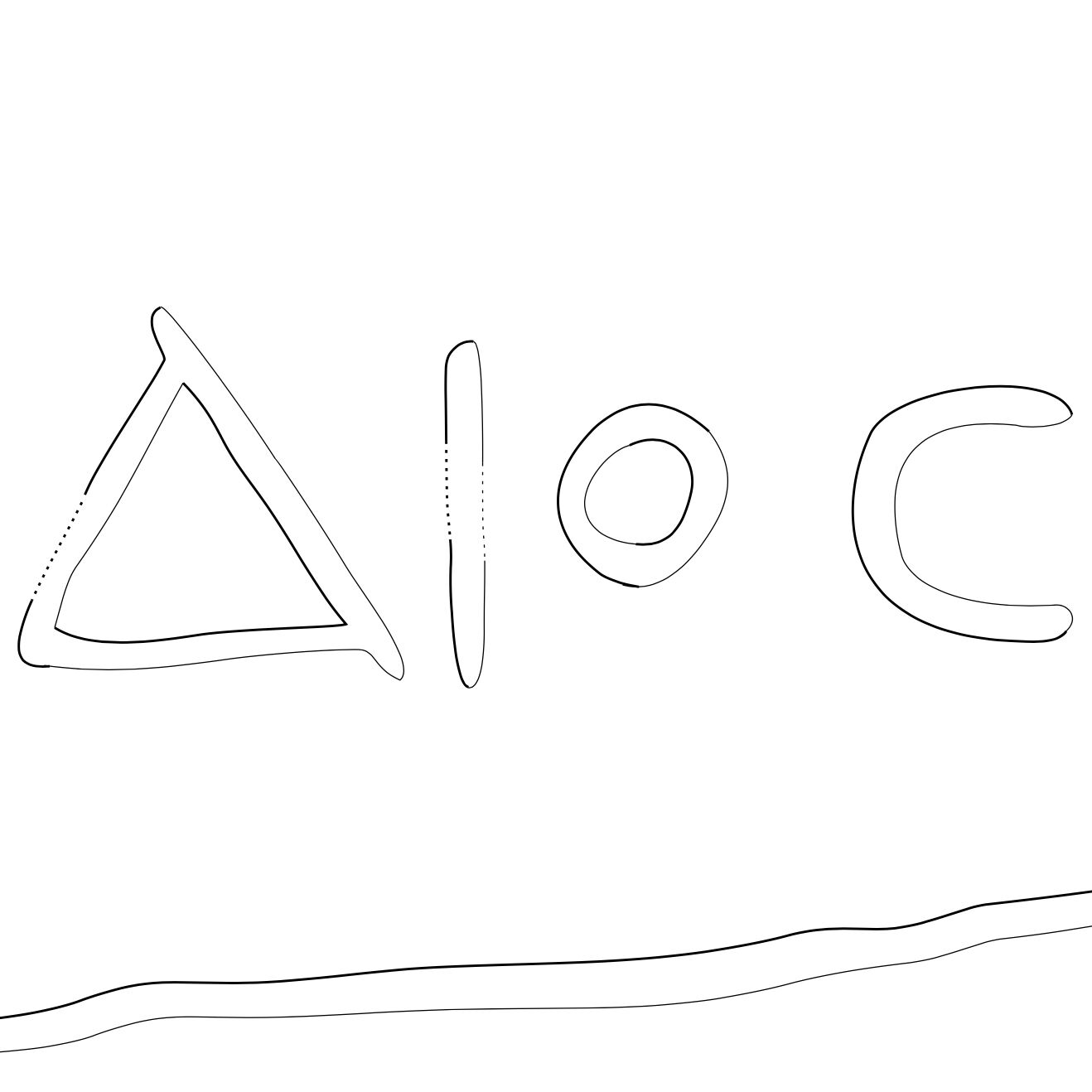