The Magnetic Pen Tool is an option of the Freeform Pen tool that lets the artist draw a path that snaps to the edges of deﬁned areas on the drawing. We can set up the range and sensitivity of its behavior as well as the complexity of our path (i.e., the number of anchor points). Although this tool is not particularly useful when deﬁning edges on photo enlargements (it works best on high-contrast areas), it proves extremely convenient when modifying inked lines.

Once the artist sets up the Magnetic Pen tool (see the gallery), he/she needs to modify its settings on the Options Bar, so it can be used for adjusting inked lines on the drawing.

Width - the Magnetic Pen detects edges only within this speciﬁed distance (1-256 pixels) from the cursor’s center point.

Contrast - the percentage value to specify the contrast required between pixels for a certain area to be considered an edge. Lower contrast requires higher values (1-100 percent).

Frequency - speciﬁes the rate at which the Pen sets anchor points (0-100). A higher value anchors the path in place more quickly. 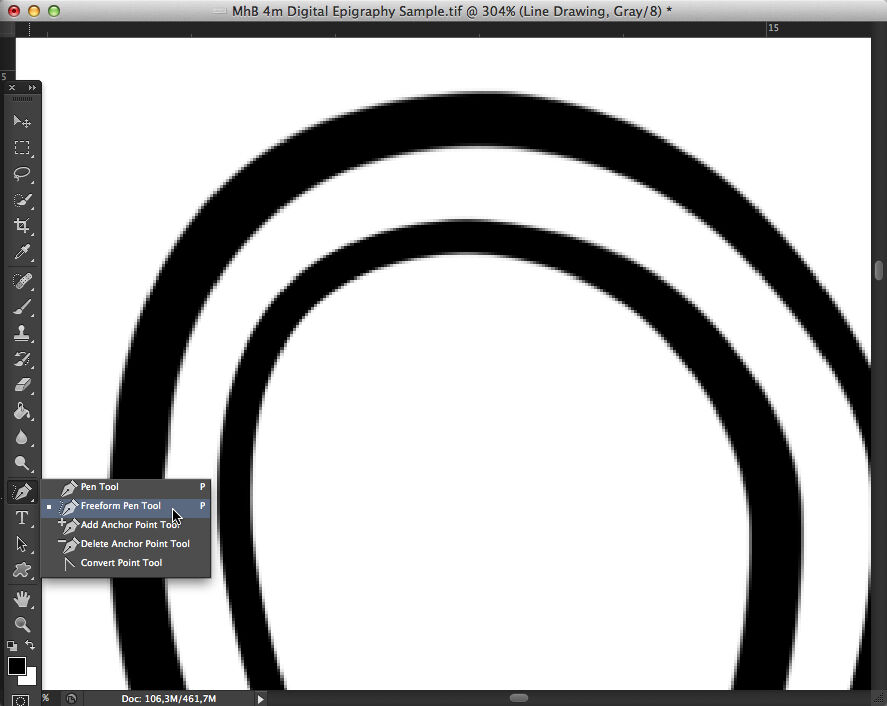 (1)Go to the Tools Bar and right click (secondary click) over the Pen tool. Pick the Freeform Pen tool. 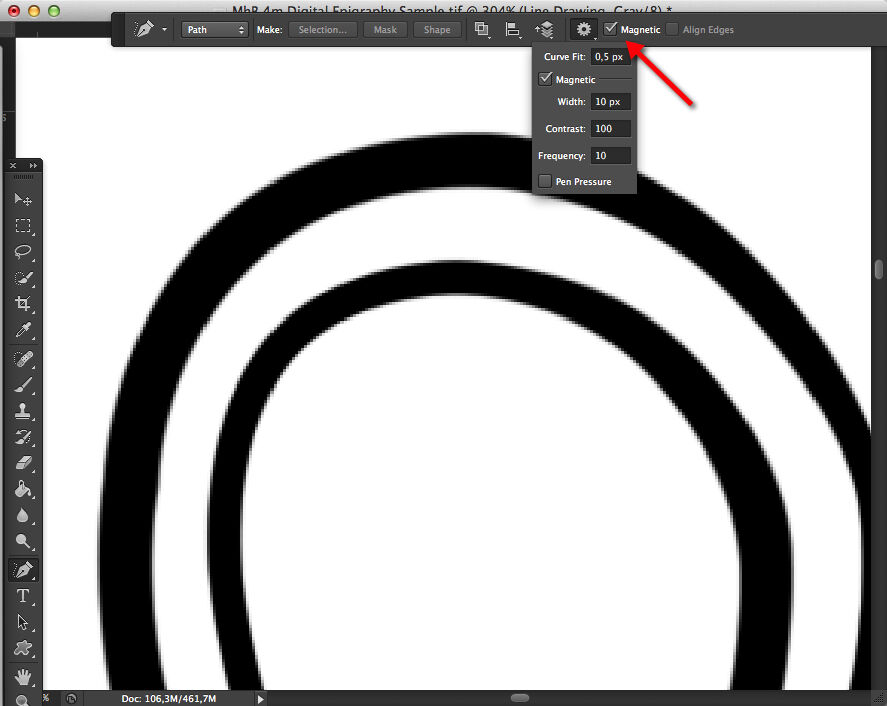 (2)In the Options Bar select Magnetic to activate the Magnetic Pen tool. Hit the cog wheel and set up Curve Fit, Width, Contrast, and Frequency as shown on the screen shot. 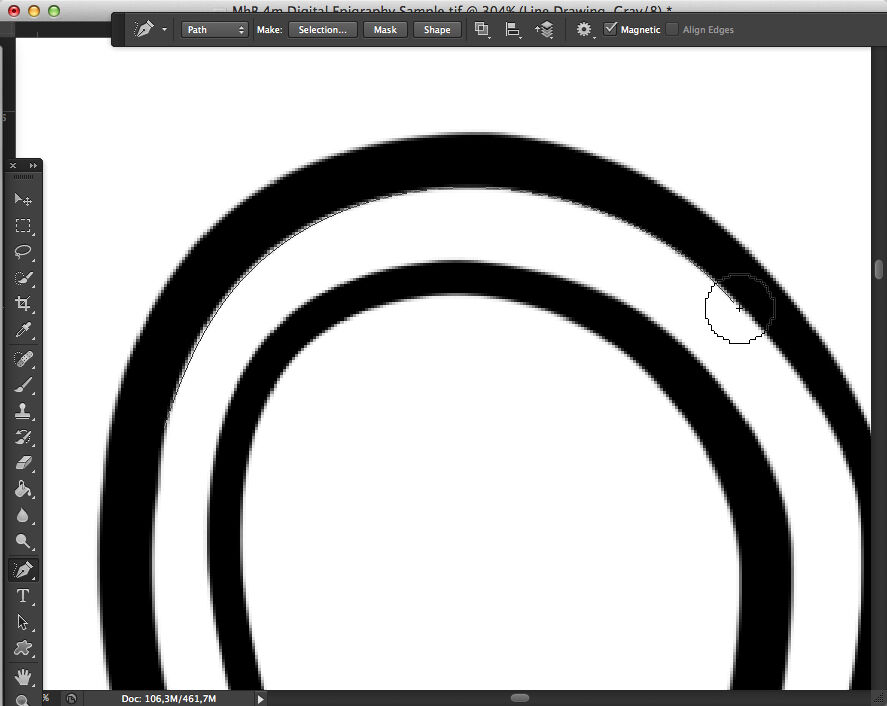 (3)Start drawing your path along the area you want to modify. When you finish your path, hit Return/Enter (it works best when it’s configured as a hot key on your Wacom tablet). 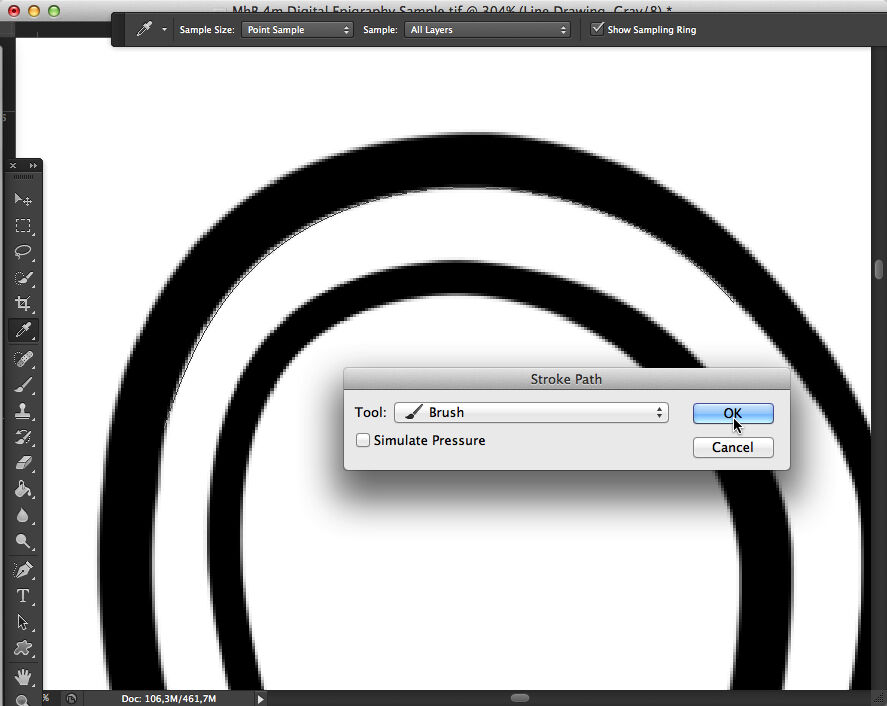 (4)Now that the path is set up, right click/secondary click on it and choose Stroke Path/Brush or Stroke Path/Eraser depending on the nature of modification you’d like to apply. 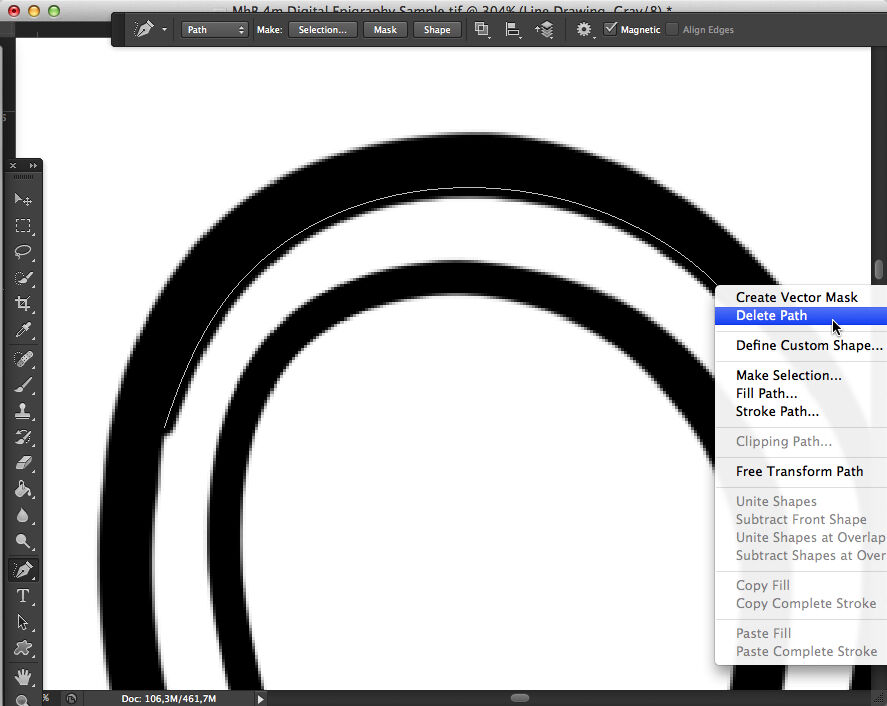 (5)Once you’re satisfied with the result, you can Move your path to a different location by hitting the Select Path tool (black arrow on the Tools Bar) or delete it (Right Click/Delete Path or Esc).

You can download the short tutorial to learn this skill. 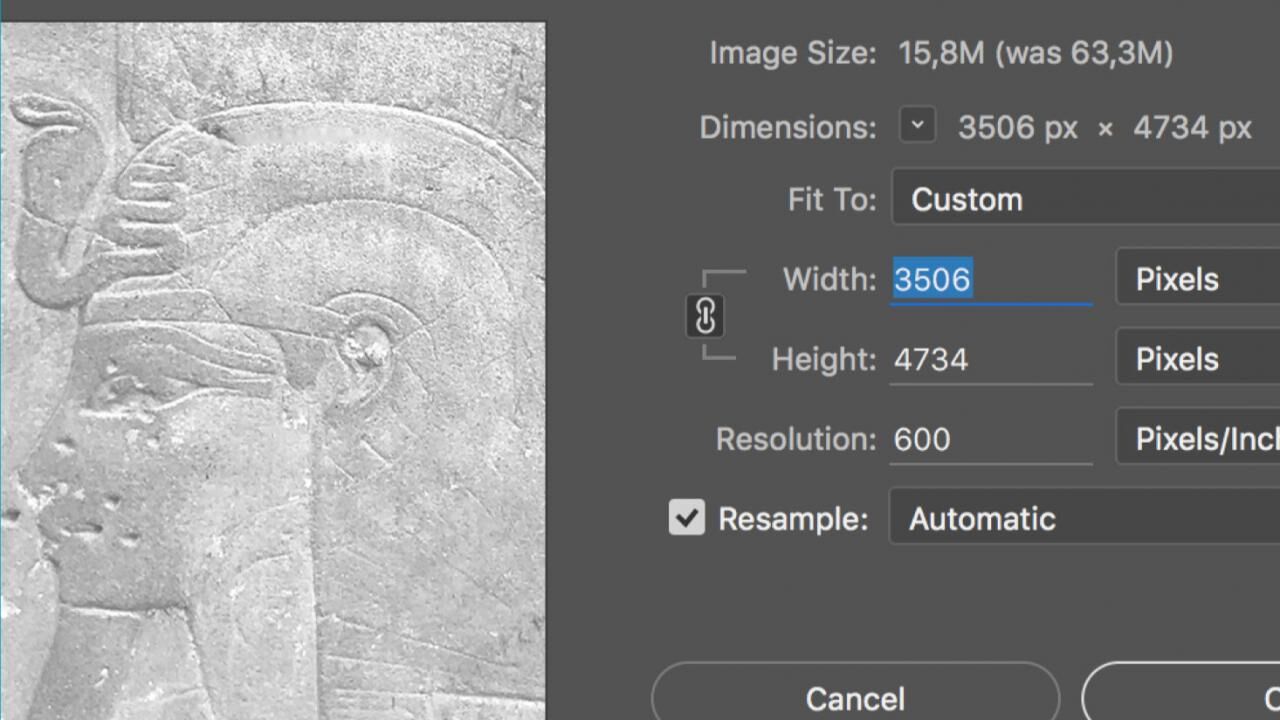 Once the artist creates the highest resolution background that is still usable in Procreate, all the layers can be merged and the file can be saved as a regular jpeg, keeping its quality at its maximum. 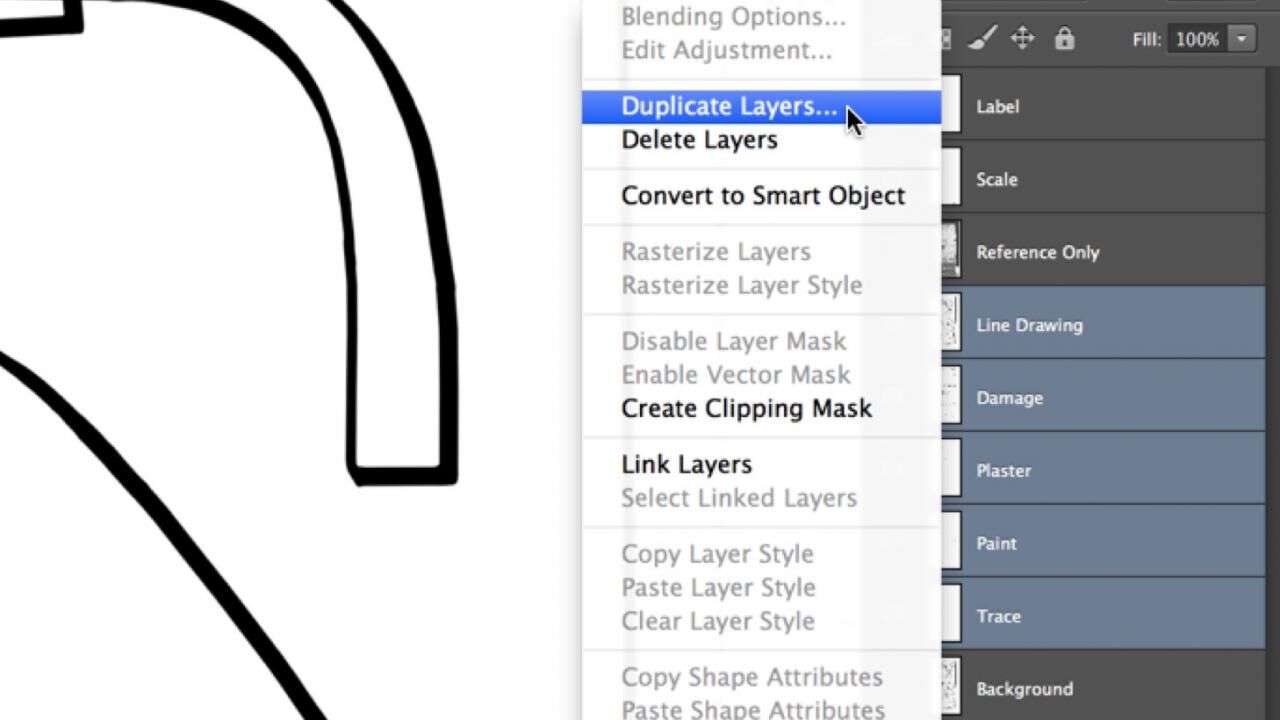 The “Ready for Collation” Layer

Before the artist starts adding the collation sheets to the digital drawing, he/she needs to set up the current stage as a layer for future reference. Later on, when we need a before and after collation comparison, this layer will be the one to which all subsequent changes can be related. 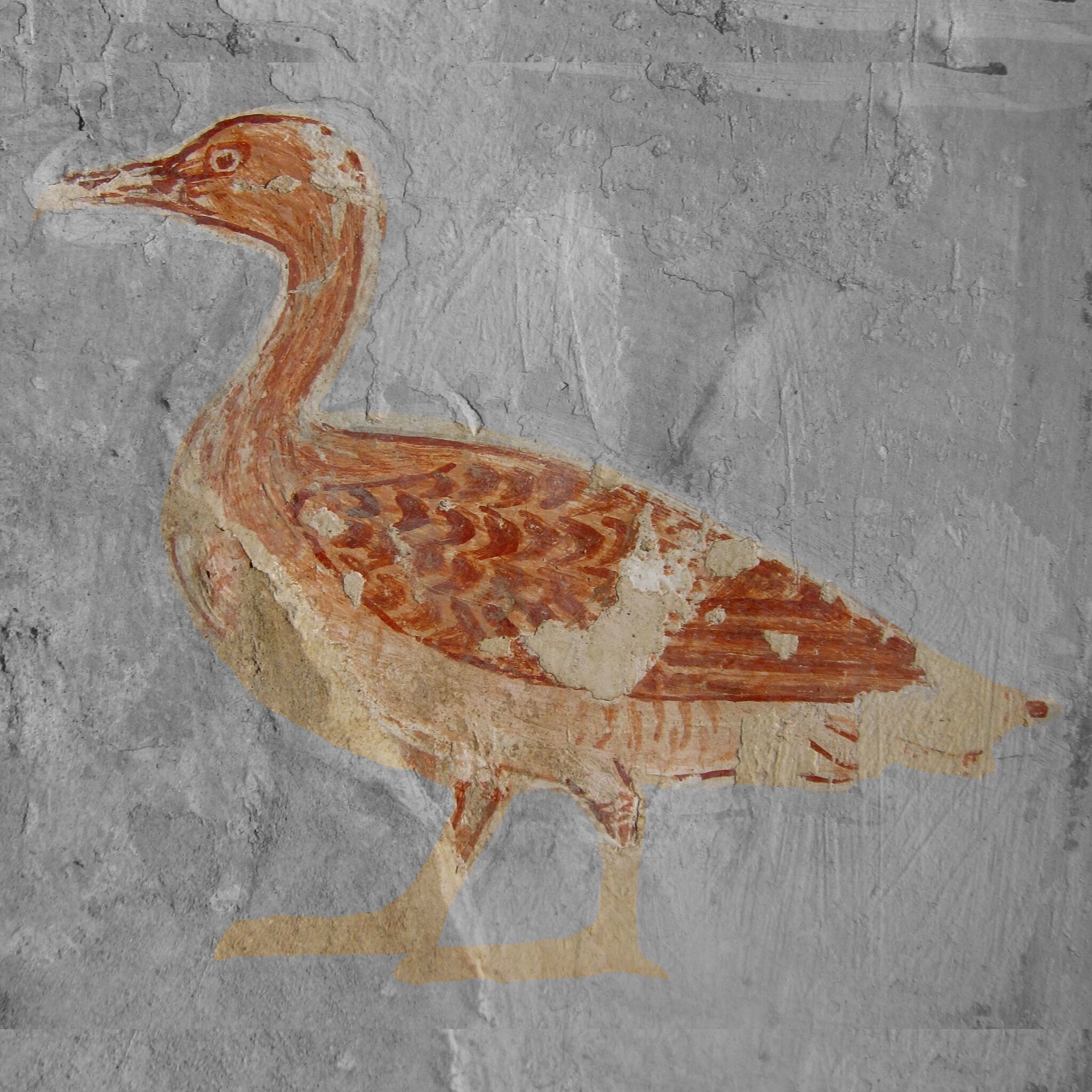 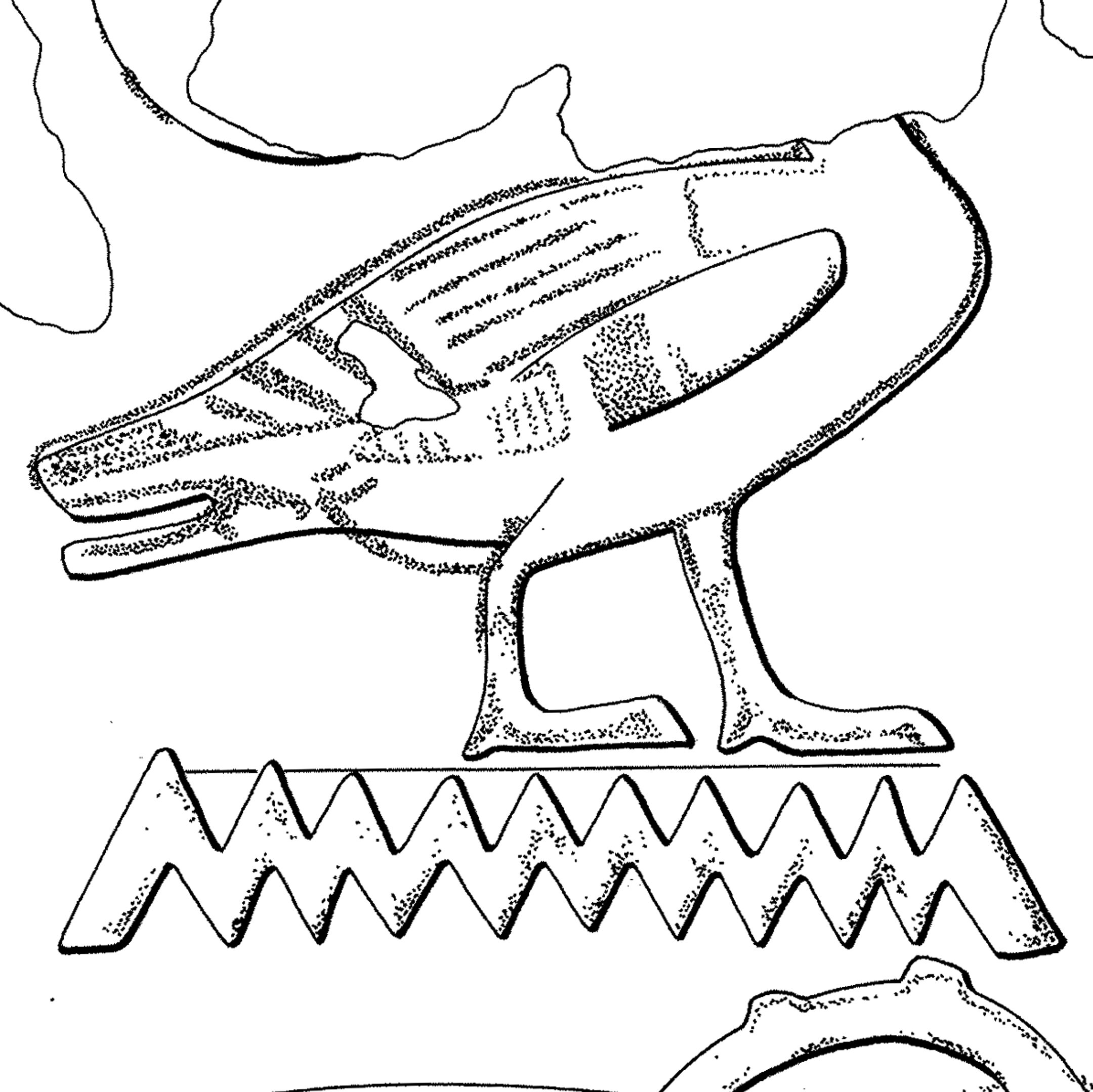