For this review, Adonit was kind enough to supply  digitalEPIGRAPHY an Adonit Note+. With a notebook, a basic iPad and Adonit Note+, you’re all set for the challenges required by digital documentation

Although starting our review of Adonit’s new stylus by talking about Wacom may seem like an odd choice, but working on Wacom displays for so long have taught us a great deal of appreciation for the little touches (no pun intended) that make a lot of difference in digital documentation. One gets easily accustomed to drawing on the matte etched glass surface of a Cintiq, with its tactile, paper-like feel; a feature that would be more than welcome on future iPads. When we look at a Wacom pen, its main approach becomes immediately apparent by putting it next to Apple’s stylus. While the Apple Pencil places form over function, Wacom prefers comfortability and accessibility. It’s undeniable that the Apple Pencil’s ease of use and exceptional precision are hard to beat, howerver adopting the Wacom Pro Pen 2’s tactile and ergonomic feel (especially paired with a Felt Pen Nib), not to mention its convenient shortcut buttons, could instantly upgrade the drawing experience on the iPad. Upon this realization, one would think that Wacom has a wide range of styli, designed specifically for the iPad/iPad Pro. Although this is more or less the case, however with lots of caveats. Most importantly, Wacom hasn’t updated its iPad stylus range in years, therefore they are poorly optimized on newer tablets. While Wacom is struggling to serve the iPad artist community, other well-established players are closing the gap with the Apple Pencil and – in many regards – exceeding Apple’s stylus by offering enhanced functionality in a more affordable package. One of the more satisfying options among these newest crops of Apple Pencil alternatives is the Logitech Crayon: basically an Apple Pencil in a cheaper package. If you are looking for a more professional experience, but don’t want to spend $99/$129 on the Apple Pencil, Adonit’s new $69.99 stylus, called Adonit Note+ (Adonit Note Plus) could very well be your best option. 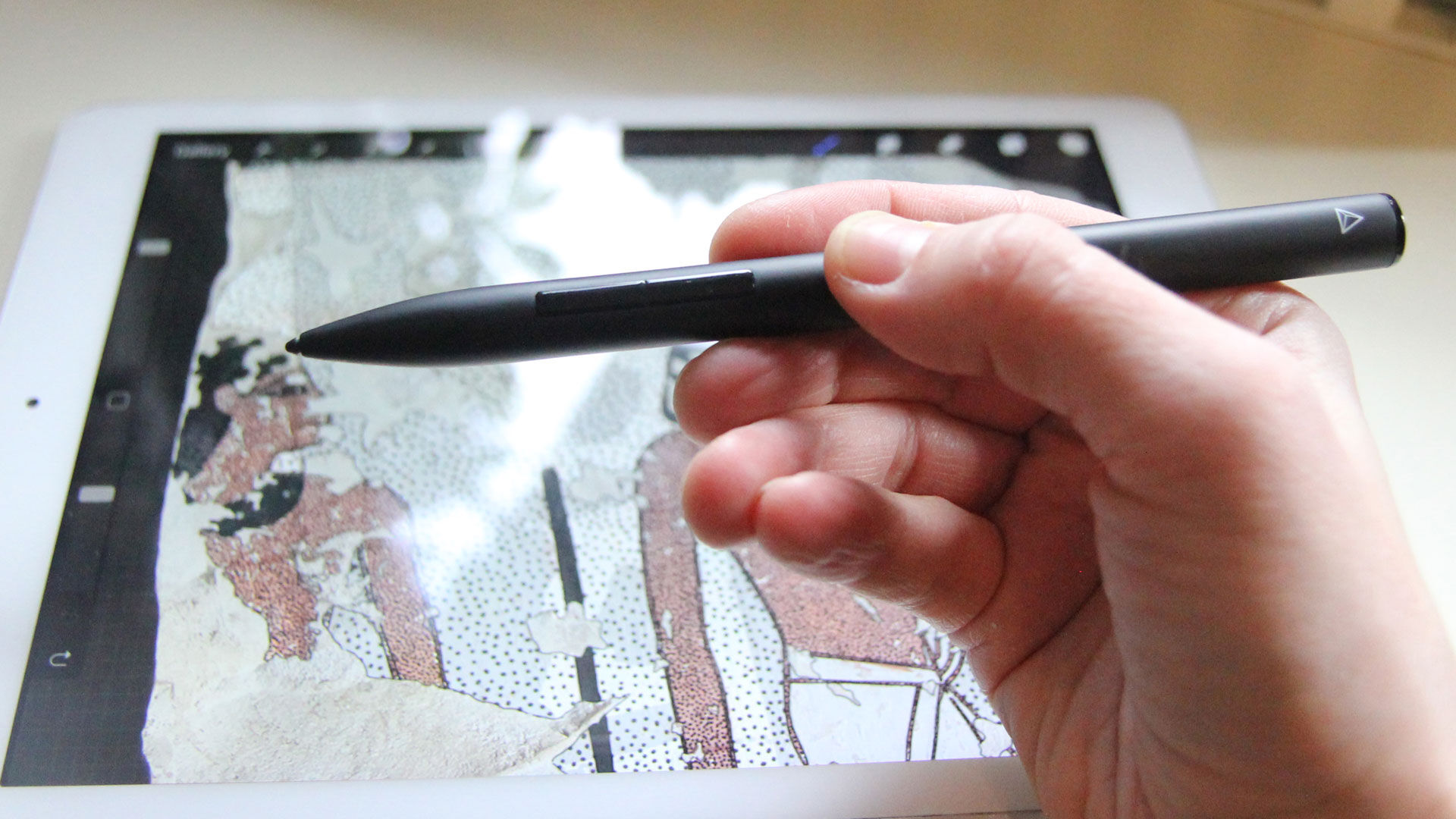 The Note+ has two customizable buttons on the side, but they have limited to no use unless your app is supported 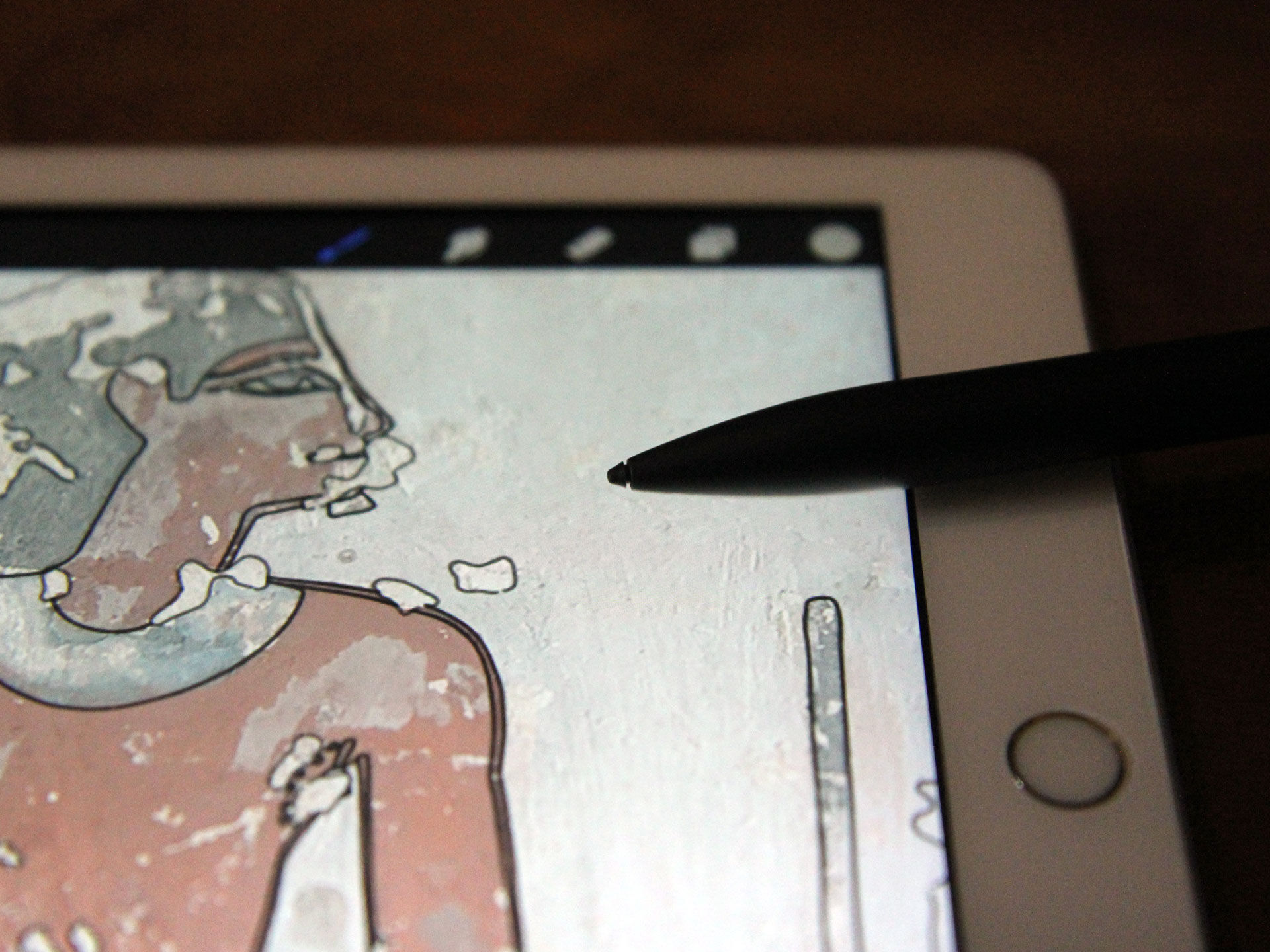 The textured tip provides a nice, tactile feel, especially when combined with a matte screen protector

Upon opening the neat little box in which Adonit’s stylus arrives, we are greeted with a list of devices the Note+ is compatible with. These include only a handful of tablets listed, such as the iPad Pro (3rd Gen 11” & 12.9”/newer), iPad Air (3rd Gen/newer), iPad (6th & 7th Gen/newer) and the iPad mini (5th Gen/newer). The pen itself is made of plastic and feels slightly less slippery than Apple’s own stylus. It is also a little thicker, but slightly shorter than the 2nd generation Apple Pencil. Nonetheless, it feels just as balanced in the hand, providing a good grip while drawing on the iPad. With the refined stylus, Adonit exchanged the pocket clip of the previous Note with more pronounced buttons on the barrel. There are two shortcut buttons, both being positioned right underneath your thumb, giving the Note+ a very Wacom-like feel. You can press the lower one to turn on the stylus and press and hold this button to deactivate it. The tip of the stylus is also slightly different as it needs to float inwards due to the newly added pressure sensitivity. This is a one-millimeter fine point tip, which means it's quite precise. Staying with the tips for a second, we noticed it to be more textured than the Apple Pencil tips, which definitely adds more friction to digital penciling. This little nuance can’t be overstated, especially considering how much precision is needed when working for hours at the monuments. Drawing with a stylus that has more “bite” on glass surfaces leads to better line quality. However, we have yet to see if the Note’s textured tip is more resistant to long term use than the Apple Pencil tip’s rubbery coating which typically wears off after a short use. There are no additional tips included with the Note+. Nonetheless, the tip is replaceable. You can buy them separately: a 3-pack costs $15, which is essentially the same what Apple asks for their replacement tips. You can get 10 hours of use out of the Note+, but it’s easily rechargeable using a regular USB-C cable Drawing while charging is certainly possible, however the included charging cable is a bit too short for said attempt

If you have the newest iPad Pro, you’ll be happy to learn that you won’t need a separate cable to charge the Note+ as it rocks a regular USB-C plug on top that can be charged by most compatible cables. Nonetheless, Adonit packs a USB-A/USB-C charging cable within the box. Although technically possible, unfortunately it is a little too short for the stylus to be used while charging. We also had to use an adapter to connect it to our newer MacBook Pro; it would have been nice to support USB-C connection on both ends of this stock solution to get more use out of it.

Charging aside, the best thing about the Note+ is that it is ready to be used as soon as it’s turned on, no fiddly Bluetooth pairing is needed for basic pen functionality in any app. However, unlike Apple Pencil, which is automatically recognized by all apps on the iPad, the Note+ needs to be paired with each app you use in order to take advantage of the pen’s more sophisticated features, such as the side buttons or pressure sensitivity. In order to achieve this, one MUST unpair the Apple Pencil first (assuming one has one), then press the lower side button while touching the iPad screen. During our short experience, we found that even palm rejection stutters when not paired properly, causing a lot of headache while drawing in Procreate, which is NOT amongst the apps supporting all functionality just yet. And this takes us to our biggest problem with the stylus, and as a matter of fact with all third-party styluses: no extra feature can be a good enough selling point, unless it’s supported by the app you’re using. And where Adonit sorely lacks is the number of apps that can take full advantage of the Note+.  So far, Adonit has successfully encouraged multiple companies to embrace its stylus, so the Note+ is maintained by Concepts, ArtStudio Pro, Medibang Paint, Colored Pencil, Sketch Club, Zen Brush 2 and some more. Unfortunately for us, support for Procreate, our primary app choice for digital penciling, is still marked as “coming soon”.

Drawing with the Note+ 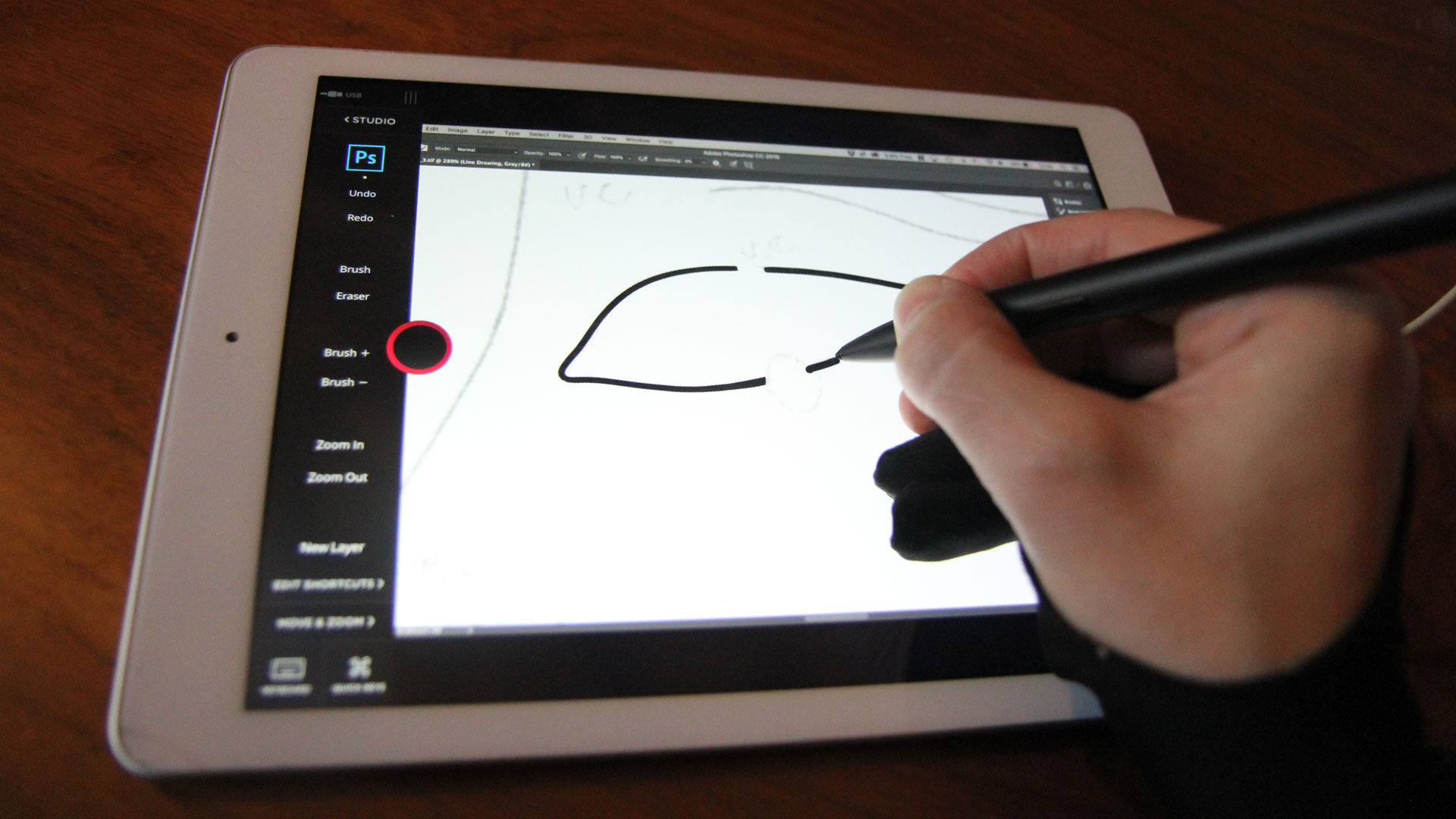 The good news is that when using in any app, even with basic paring, the Adonit Note+’s response time is extremely fast, causing no noticeable lag over Apple’s own stylus. Even when we applied repeated brush strokes on damage textures (using desktop Photoshop via a remote access provided by Astropad Studio), the lines were able to keep up with the rapid movements of the pen. Unfortunately, what is true for Procreate is equally true for Astropad: we couldn’t make any use of the side buttons while drawing... On the flipside, we didn’t notice any jittering or waviness to the line. Brushstrokes appeared directly underneath the pen’s tip, minimizing the parallax effect even on the regular iPad we used for part of our testing.

Nonetheless, switching to a compatible app that can take advantage of all the pen’s features makes a night-and-day difference. The Note+, when used in ArtStudio Pro, becomes a full-fledged Apple Pencil replacement with the added 2048 levels of pressure sensitivity and natural tilt and palm rejection support. Still, the best new technology that is built in the stylus is provided by the programmable shortcut buttons. If you’re like us, constantly wanting to erase while drawing or to undo a misplaced brush stroke, you’ll be glad to hear that you can do just that by using one of these switches. In our experience, being able to switch functions through actual physical buttons was an infinite improvement over the 2nd generation Apple Pencil’s touch strip, which often takes accidental inputs, holding it back from being really useful. The buttons can be set to activate undo, redo, erase, select items, show layers and/or color palettes, certain tools or objects, depending on the app you use. 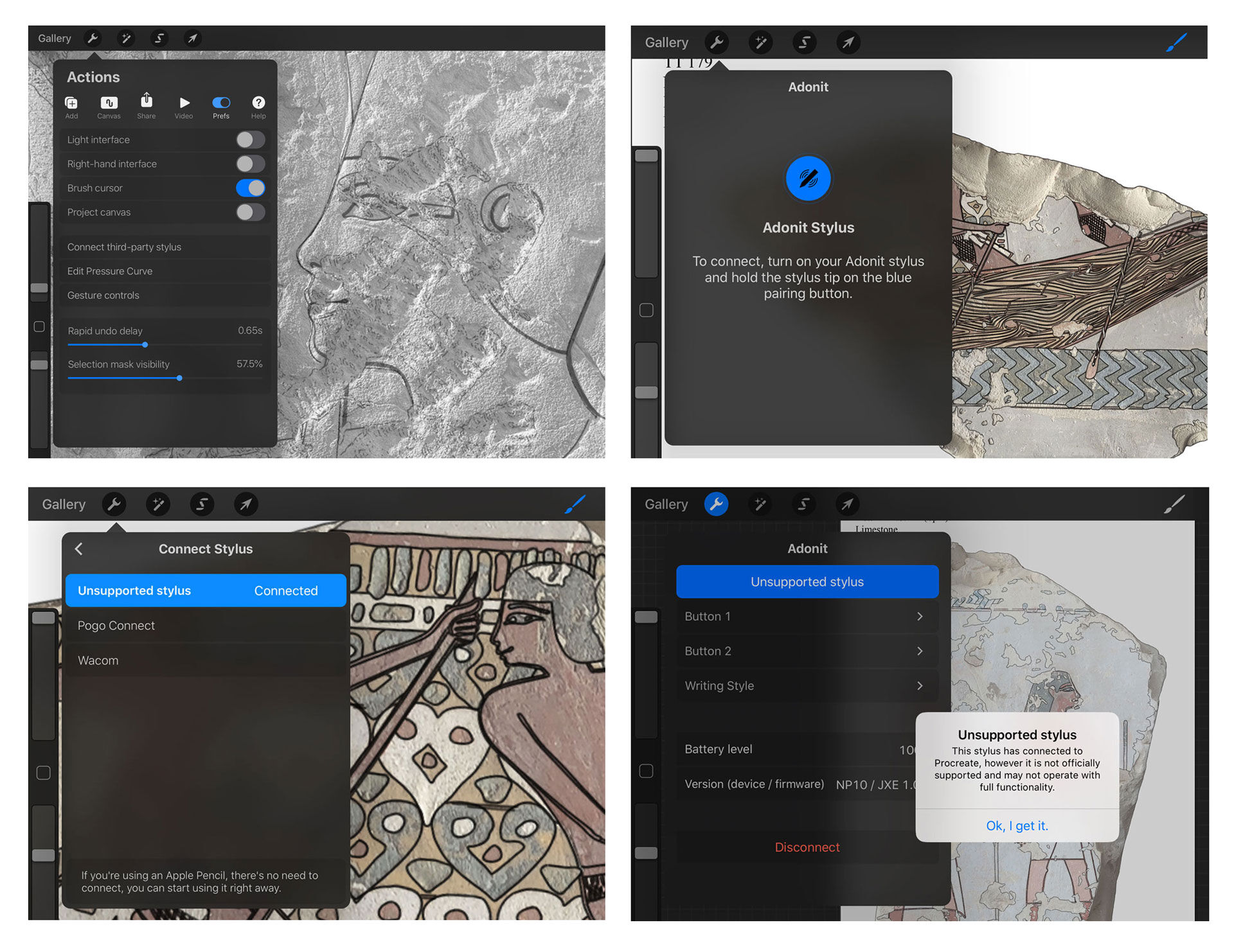 Any attempts to pair the Note+ with Procreate failed, leaving us with a basic stylus and the desire for wanting more

All in all, the Adonit Note+ is a very capable Apple Pencil replacement with the prospect of becoming even more useful. For that to happen, third-party application developers have to add support for Adonit Note+ to their software. It is very reassuring to know that such precision and smoothness can be achievable at this price point, as not all of our colleagues can afford a pricy Apple Pencil. Nonetheless, what really sets Adonit’s solution apart from other non-Apple iPad styli are its extra features, notably its pressure sensitivity, palm rejection, tilt support and last but not least the programmable buttons. Assuming you have the right app for it, which – sadly – we currently don't have. Adonit’s Note+ can be purchased for $69.99 directly through Adonit. It is also available from various retailers, including Amazon and B&H. 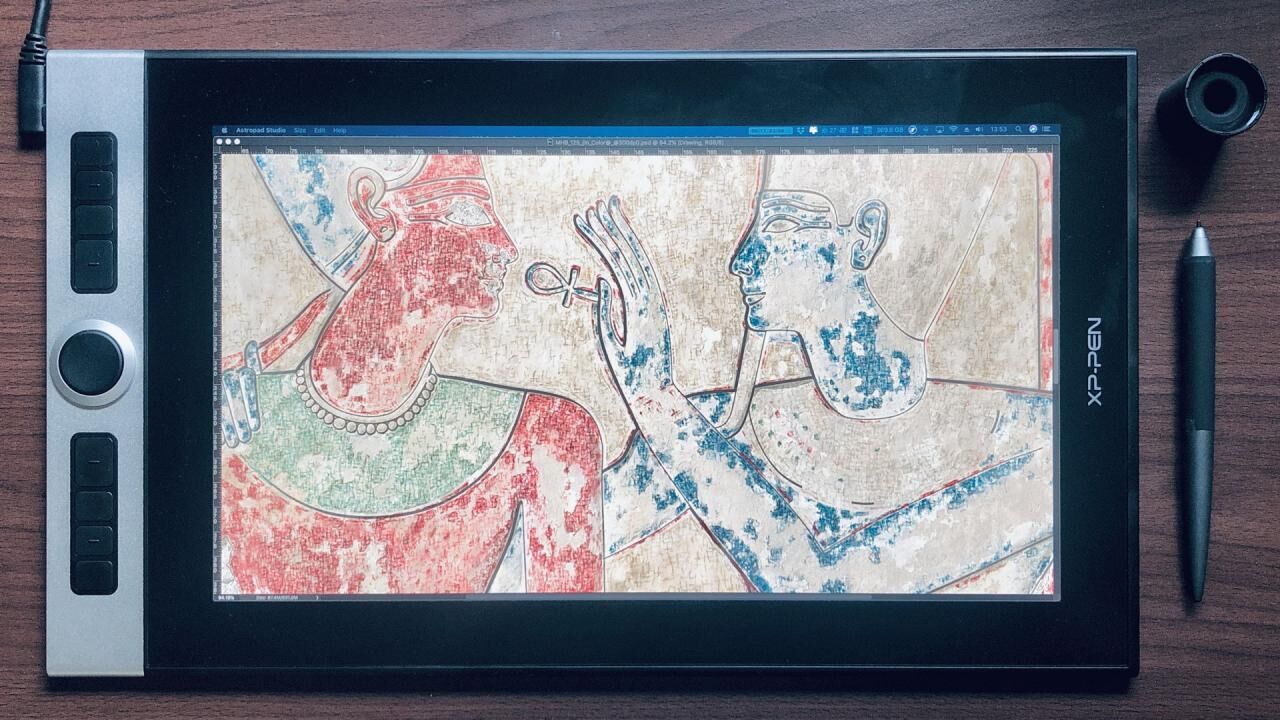 We at digitalEPIGRAPHY are in a fortunate situation. Since the Epigraphic Survey started experimenting with utilizing digital tools in their documentation process... 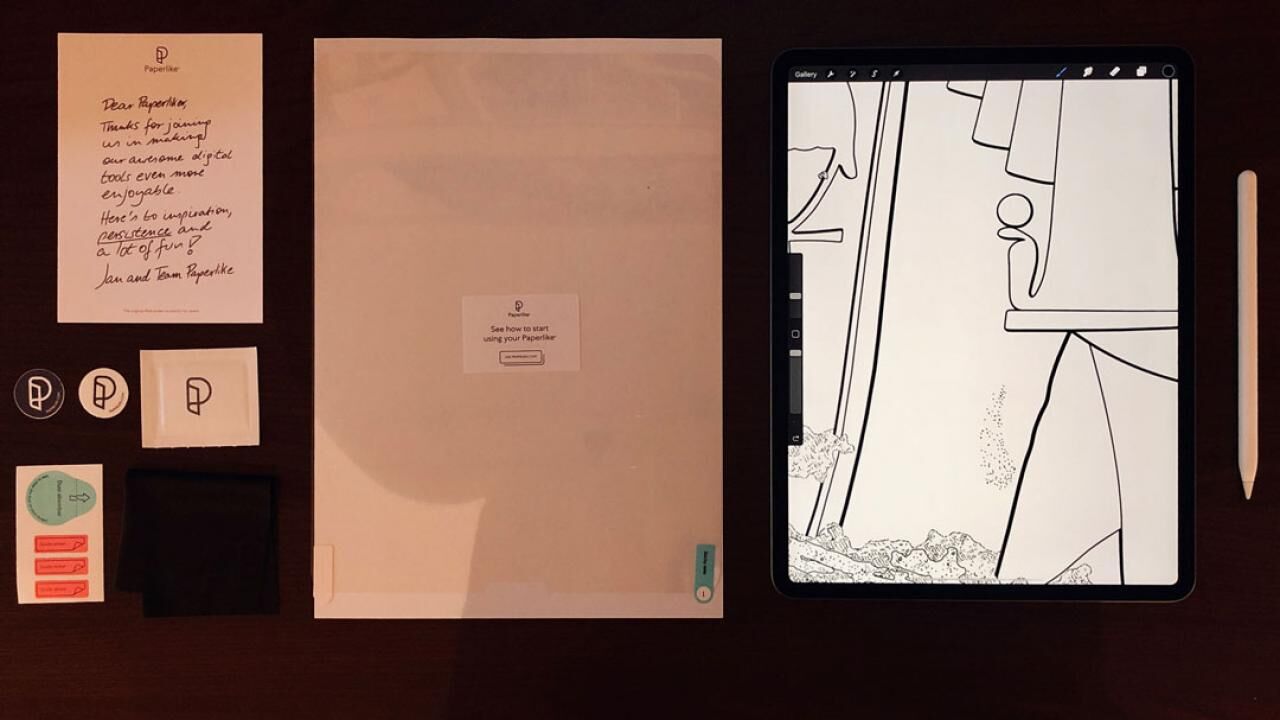 After yet another successful Kickstarter campaign, creator Jan Sapper and his team are back with the refined version of their original matte iPad screen protector, especially designed for artists