Written by Peter Der Manuelian, Barbara Bell Professor of Egyptology, and Director of the Harvard Museum of the Ancient Near East at Harvard University

Fig. 1. Western Cemetery, from top of Khafre pyramid, looking north (discovery site of many of the slab stelae). Photo by the author, PDM_1993.138.13. 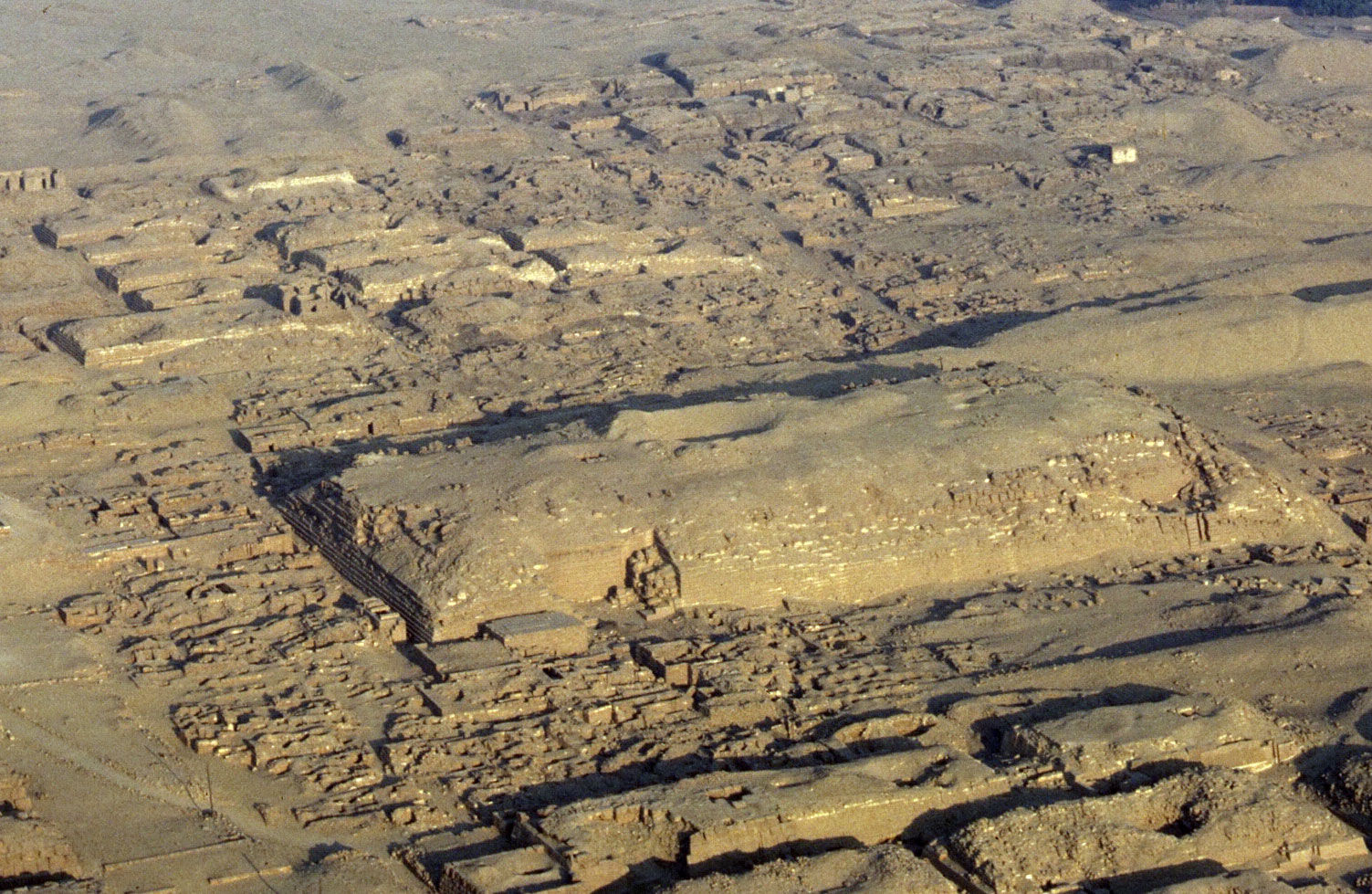 One of the challenges of epigraphic work consists of essentially converting three-dimensional artwork into a two-dimensional representation on paper (or on-screen). Even the lowest, most subtle type of carving, such as what one finds under Khufu or on certain Middle Kingdom reliefs, is still three-dimensional. This note summarizes an experiment in solving one aspect of this conversion problem.

Back in the early 2000s, when digital epigraphy was barely a decade old, I had the privilege of globetrotting in an attempt to produce facsimile line drawings of the fifteen known Old Kingdom “slab stelae” from the Giza Plateau’s Western Cemetery (figs. 1–2). In most cases I was able to visit the stelae for study and digital drawing collation at their home museums, but in a few cases I caught up with stelae which were then “on tour.” My travels took me to Boston, Berkeley, Cairo, Richmond, Virginia, Paris, Port Said, and Vienna. The Port Said Museum building, which once housed the stelae of Setji-hekenet (G 1227) and Ini (G 1235), no longer exists. 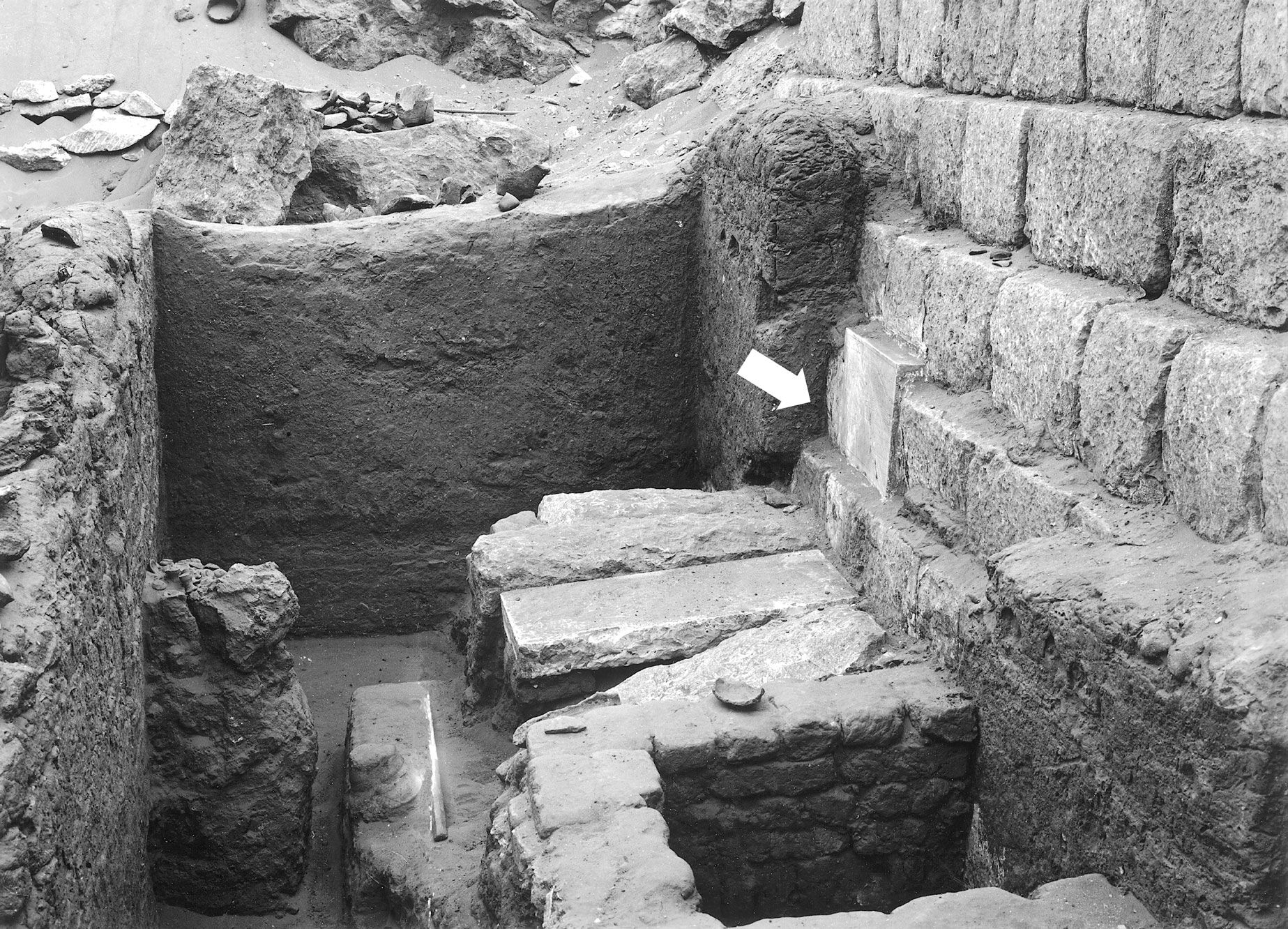 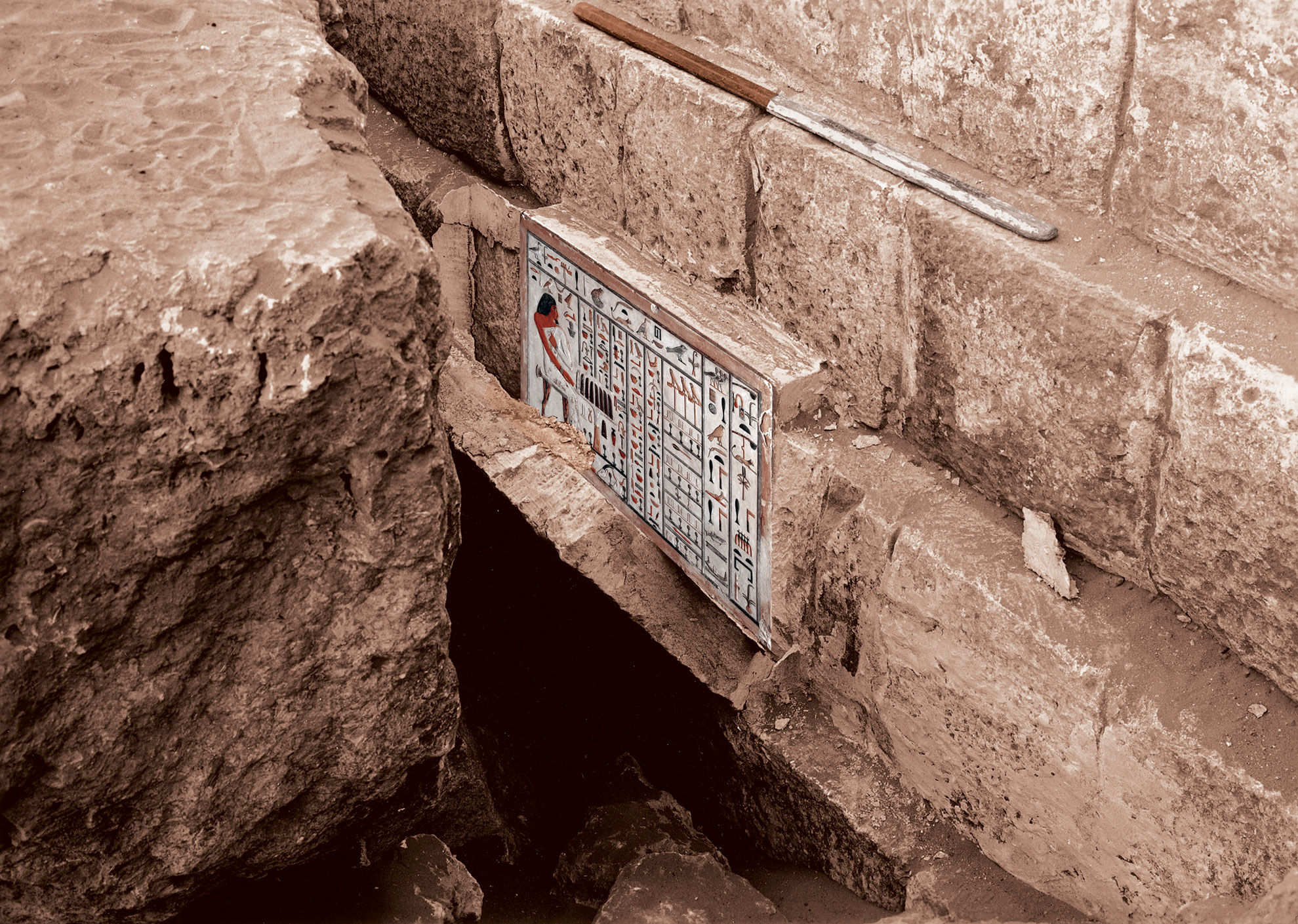 Close study of these monuments often revealed delightful details which I had either missed from earlier publications or were simply impossible to detect from (often black and white) photographs alone. For example, there was the “hieroglyphic typographical error” by the craftsman who carved jpr for jrp “wine,” reversing the order of the r and p signs. There were discrepancies in layout symmetry, such as the “missing” offerings below the offering table of Nefer (G 1207), the uneven “frame” around the stela of Ini (G 1235), or the many hieroglyphic reversals. Some stela owners chose bull-legged stools, others lion-legged stools; some sat on cushions while others “roughed it” on the stool seat itself. Only one (Setji-hekenet, G 1227) chose a palmiform seat terminal instead of the usual papyrus umbel. Some added granaries to the lower register of their linen lists. Minute details, such as changing the little round fruits in baskets from yellow to green depending on contents (carob beans, figs, prepared grain, sekhet-cakes, and persea fruit), were important enough for the Egyptians to include. And there was intentional damage as well, not just to faces but to names, titles, and even to some of the jdmy falcons in the linen lists.

As I collated my drawings of some of the (few) painted slab stelae, I discovered aspects of the decoration that were painted only, and not carved. This did not show up in any photos I had previously studied; so, part of the Egyptian dataset was getting lost in the “conversion process” from 3D ancient monument to 2D reproduction, in this case with photography. I wondered how I could convey this feature with my digital drawings so that readers could distinguish between elements that were carved, and those that were merely painted. I am not referring to fully painted signs here, such as a red mouth, a black Hm club, or a green reed leaf; those were clear enough. But rather I needed to delineate this 3D “discrepancy” so that it would be clear in my 2D digital medium. In other words, users might expect that a sign had been carved, and I had to show that no carving had ever occurred. Our modern reproduction system was potentially misleading the reader. 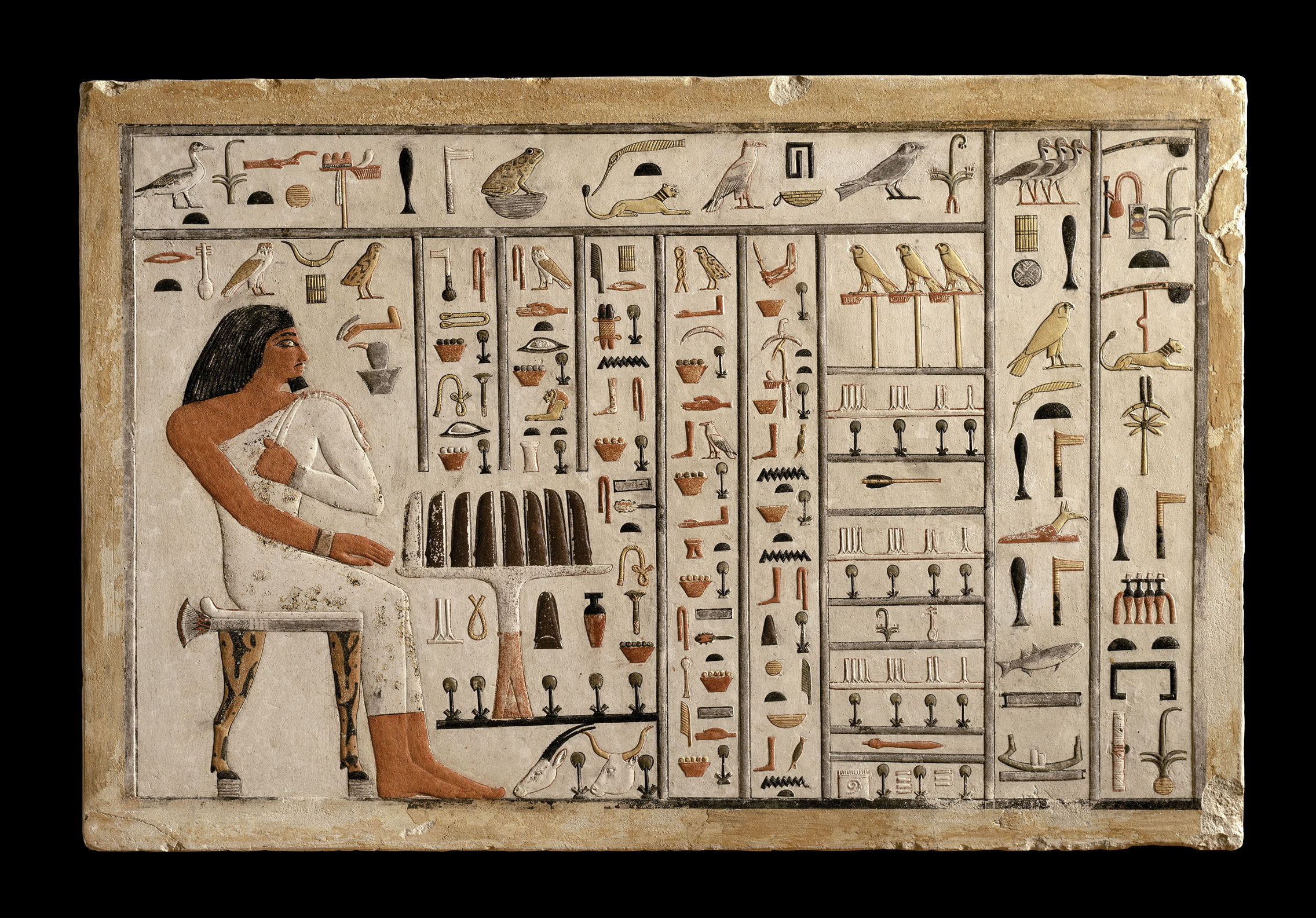 Since I hoped to reproduce color photographs with my drawings side by side in the eventual publication, I was not concerned about trying to reproduce every polychromed detail in my epigraphy in an attempt to create a photorealistic replication. The color photos would take care of that (fig. 5). But I did want to somehow indicate elements that were carved versus those that were merely painted. My solution was to choose a (rather garish) red color to add on top of my black carved lines, to indicate the different techniques the Egyptians used, regardless of their reasons—intentional or not. 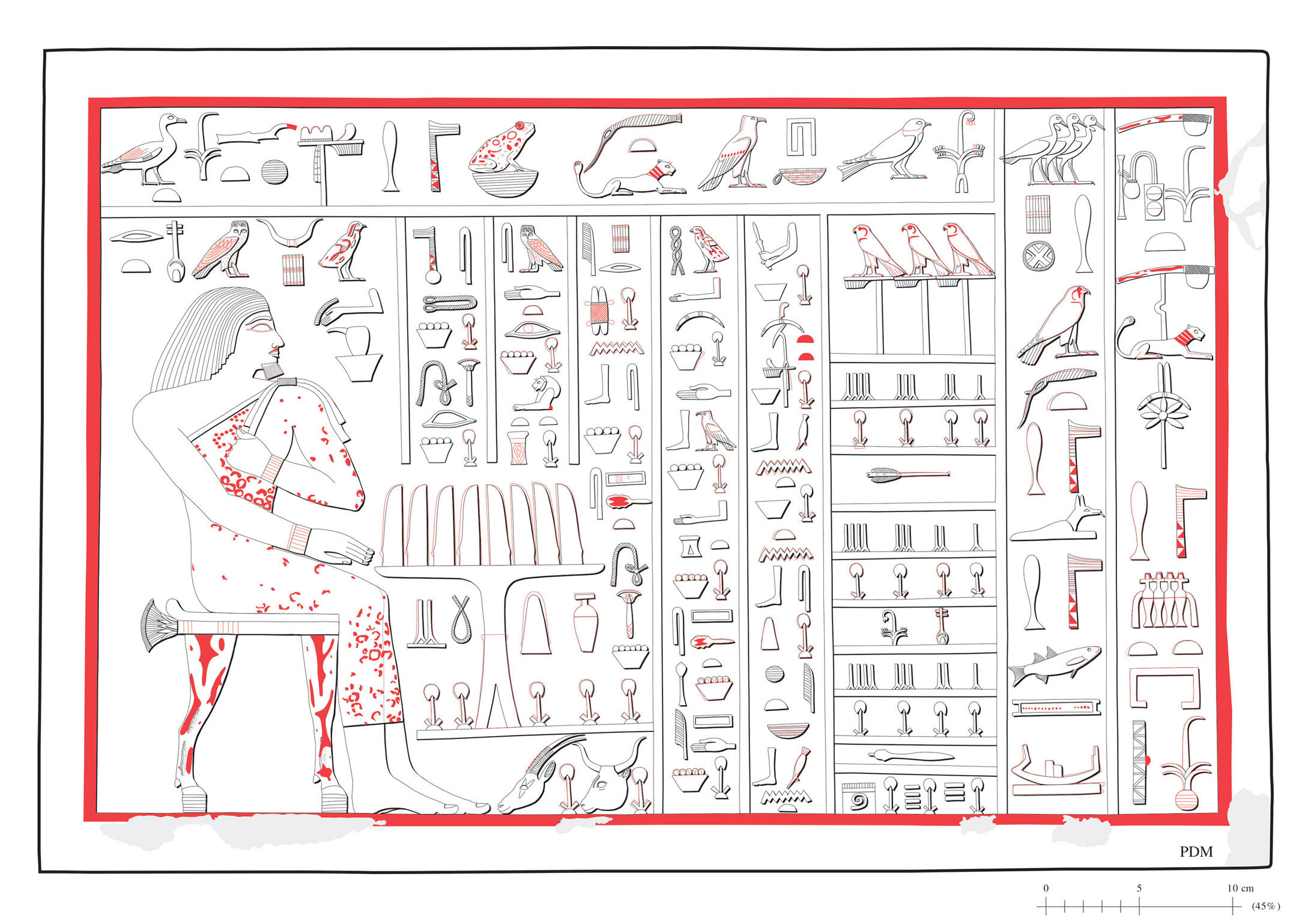 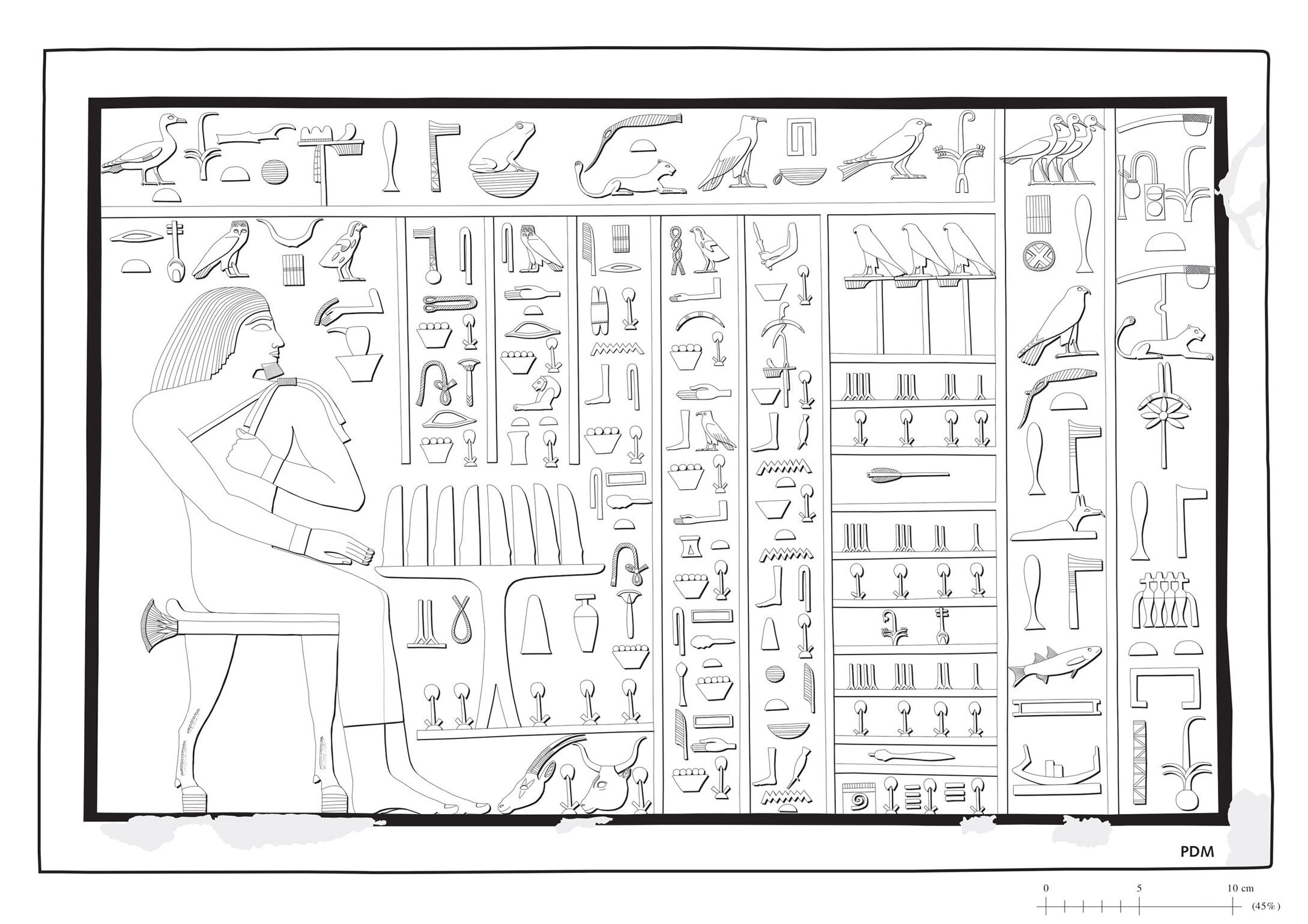 On the stela of Wepemnefret, from Giza mastaba G 1201 (figs. 5–7), for example, the two red t-signs in the word jAtt “milk” should have been carved but were not; as an afterthought the artist added them in black. So, I colored them red to indicate the lack of carving (fig. 6). This was a simple experiment, and since my drawing was in layers, and consisted of vectors, removal or editing of the red color was always an option (fig. 7). 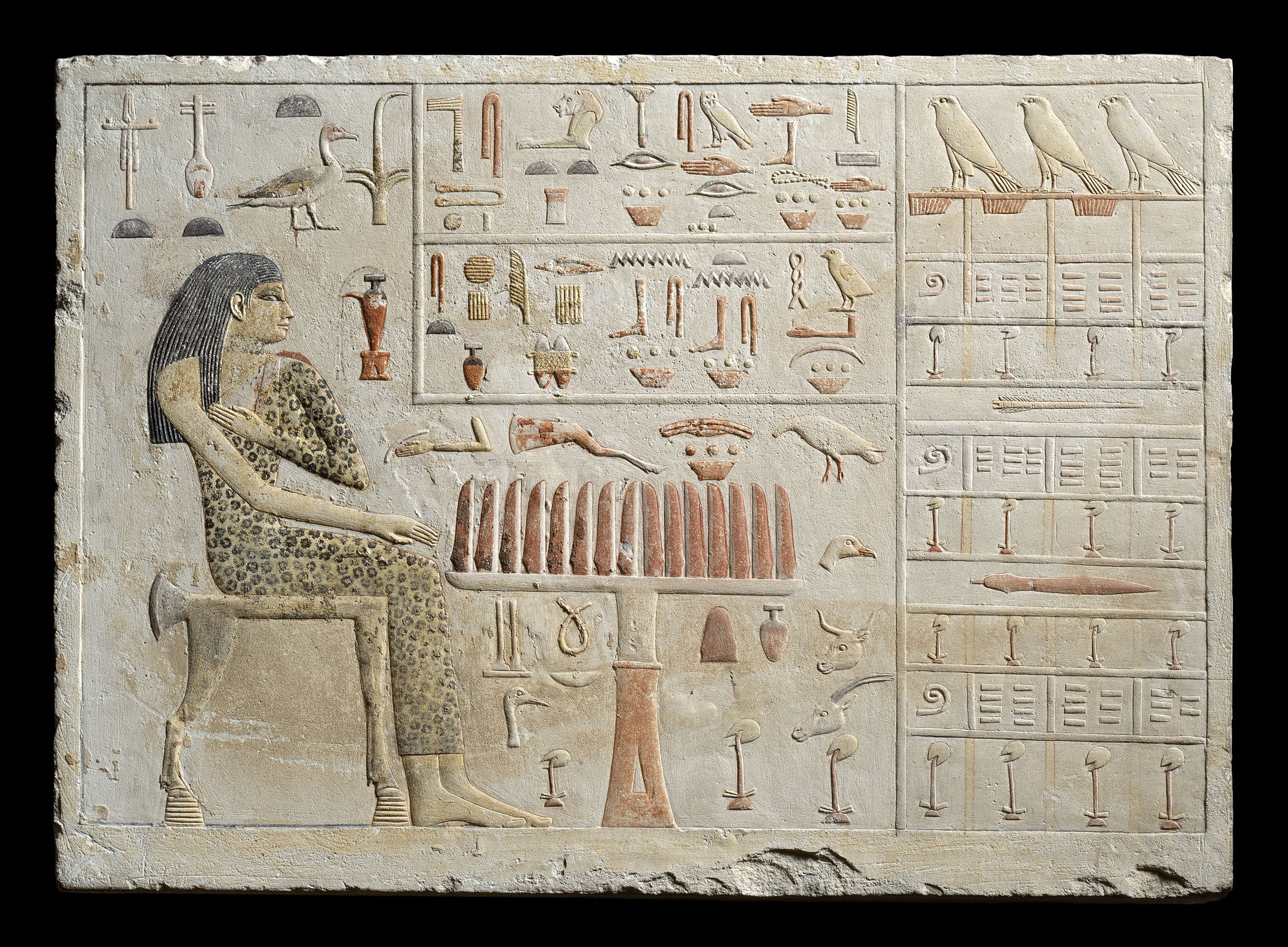 A similar ancient omission/correction appeared on the stela of Nefret-iabet (G 1225). On the linen list to the right of each slab stela, the sculptors normally created a meticulous grid of vertical and horizontal lines in raised relief to separate the various types of linen, their qualities and quantities (fig. 8). But in Nefret-iabet’s case they seem to have forgotten the vertical separators by the “1,000” quantity sign rows (below each type of linen). The ancient solution was to hastily paint two vertical red lines for each separator and fill them in with yellow. The artist also added the water flowing out of the libation vessel before Nefret-iabet’s face in paint only. In my drawing, the difference between raised relief carved lines and these last-minute(?) painted additions should be clear (figs. 8–9). 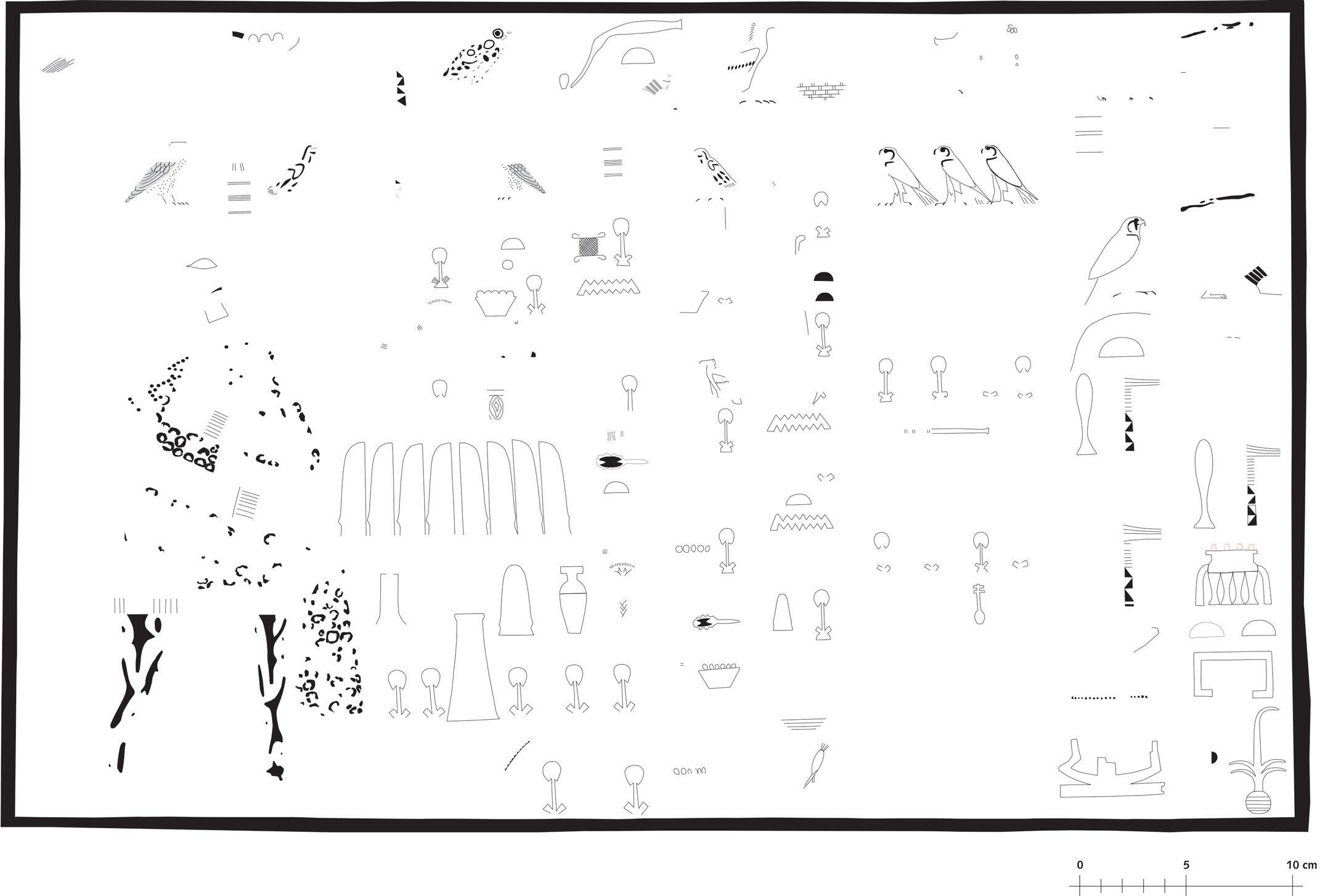 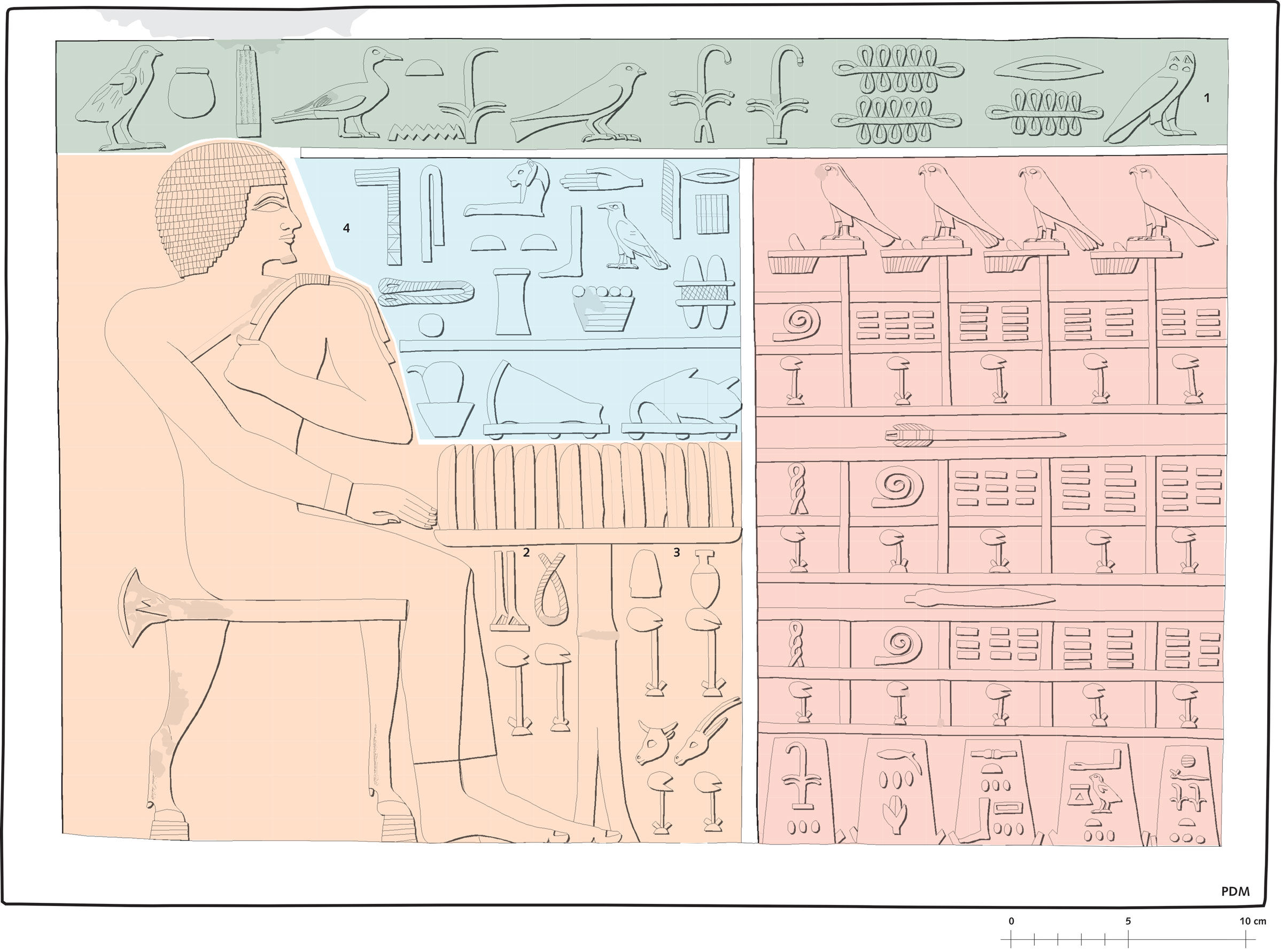 Fig. 11. Colorized facsimile drawing of the Iunu stela from G 4150.

Thanks to the use of layers, it was even possible to “lift” the painted details on Wepemnefret’s away from the stela and illustrate them separately (fig. 10). In the case of the third stela that preserved large amounts of color (Iunu, G 4150), the painted elements enhanced the interior detail of  the three cattle hobble signs in the “overseer of phyles” title, the tip of the sSr arrow, the eye treatment of the jdmy falcons, the bread loaves on the offering table, and some wing details on the zA-nswt “king’s son” title. These details are almost impossible to distinguish based on the color photograph alone. Other, more modern and didactic, uses of color in my drawings helped me to differentiate what I considered to be the four decoration zones that are common to each stela (fig. 11).

Digital epigraphy has evolved considerably since the days of this particular project. And the solution described here doubtless has some inconsistencies; it is merely one approach of many. To tackle this challenge in 2019, as opposed to back around 2000, I would now probably use an iPad, Procreate, Adobe Photoshop and Adobe Illustrator. And since not every publication has the luxury of color reproductions, differing levels of gray or stippling/patterning might have to replace the red color that I chose. Nevertheless, I hope my simple experiment still serves its purpose, nearly one and a half decades later.

The publication referred to above is

Peter Der Manuelian, Slab Stelae of the Giza Necropolis. Publications of the Pennsylvania–Yale Expedition to Egypt, Number 7. New Haven and Philadelphia: Peabody Museum of Natural History of Yale University and the University of Pennsylvania Museum of Archaeology and Anthropology, 2003. 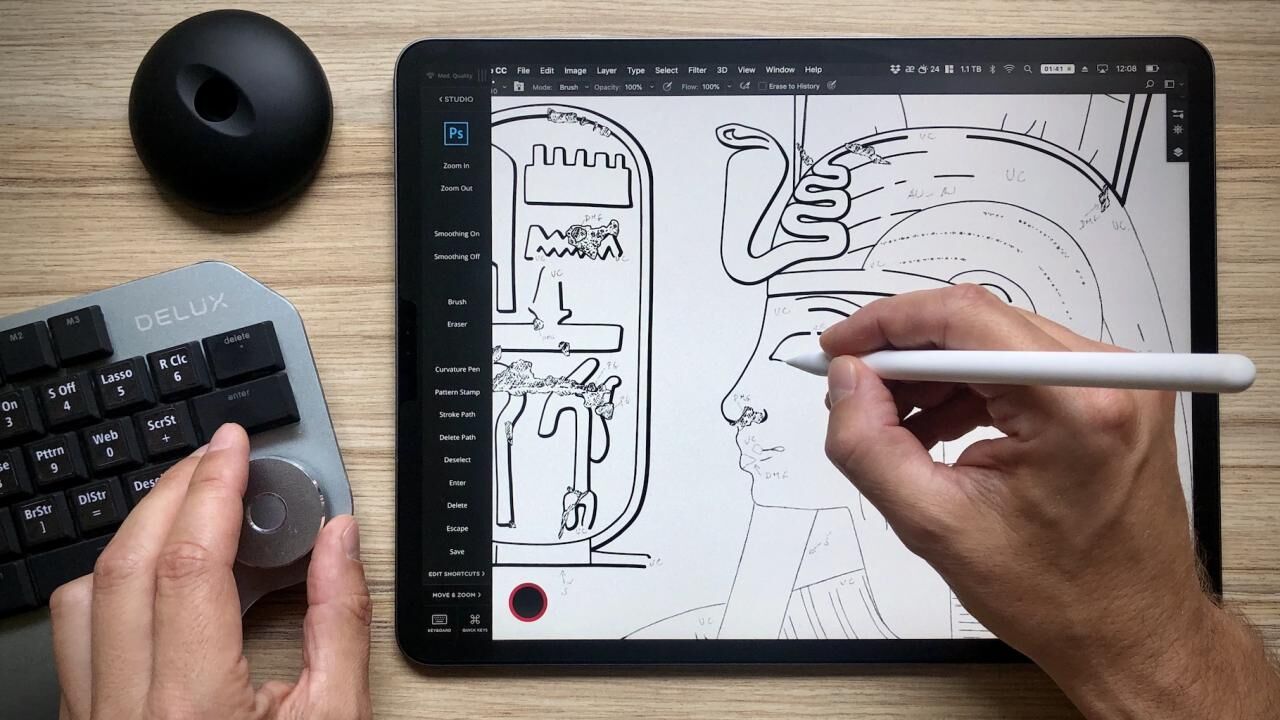 In the following article, we shall continue exploring new ways of enhancing our traditional documentation techniques in a meaningful way, this time mostly concentrating on the artist’s work in the studio. 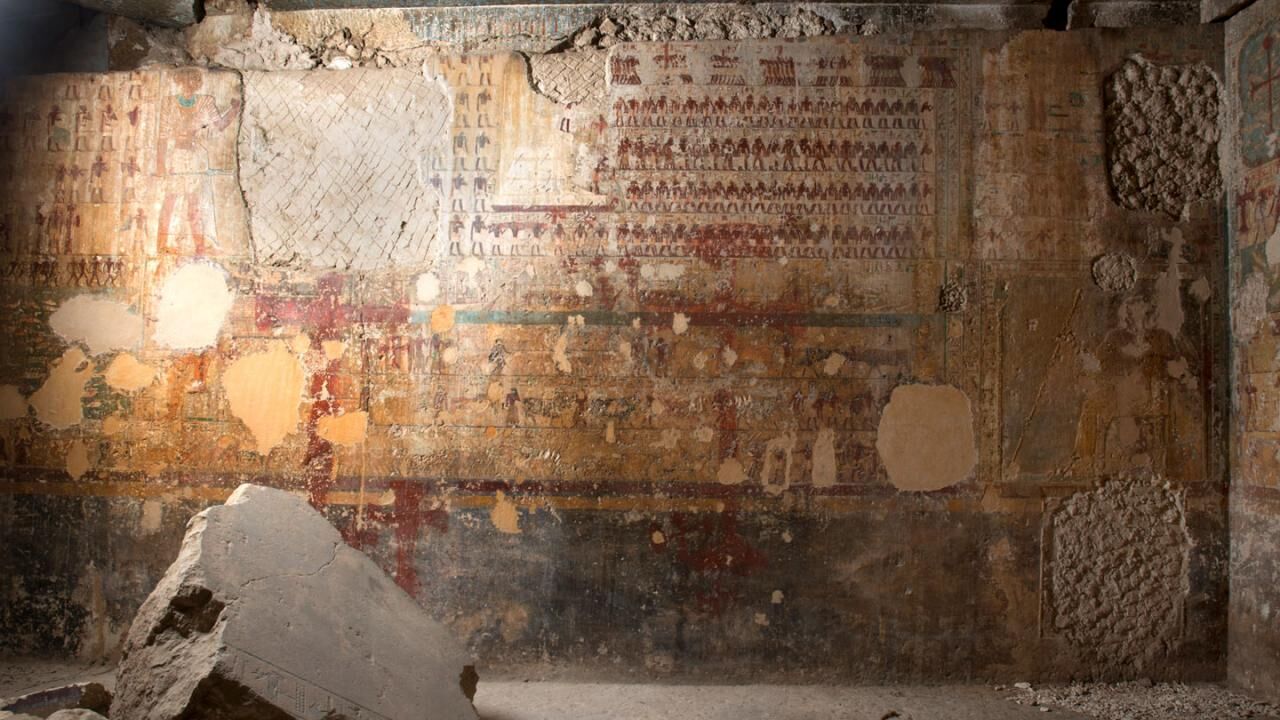 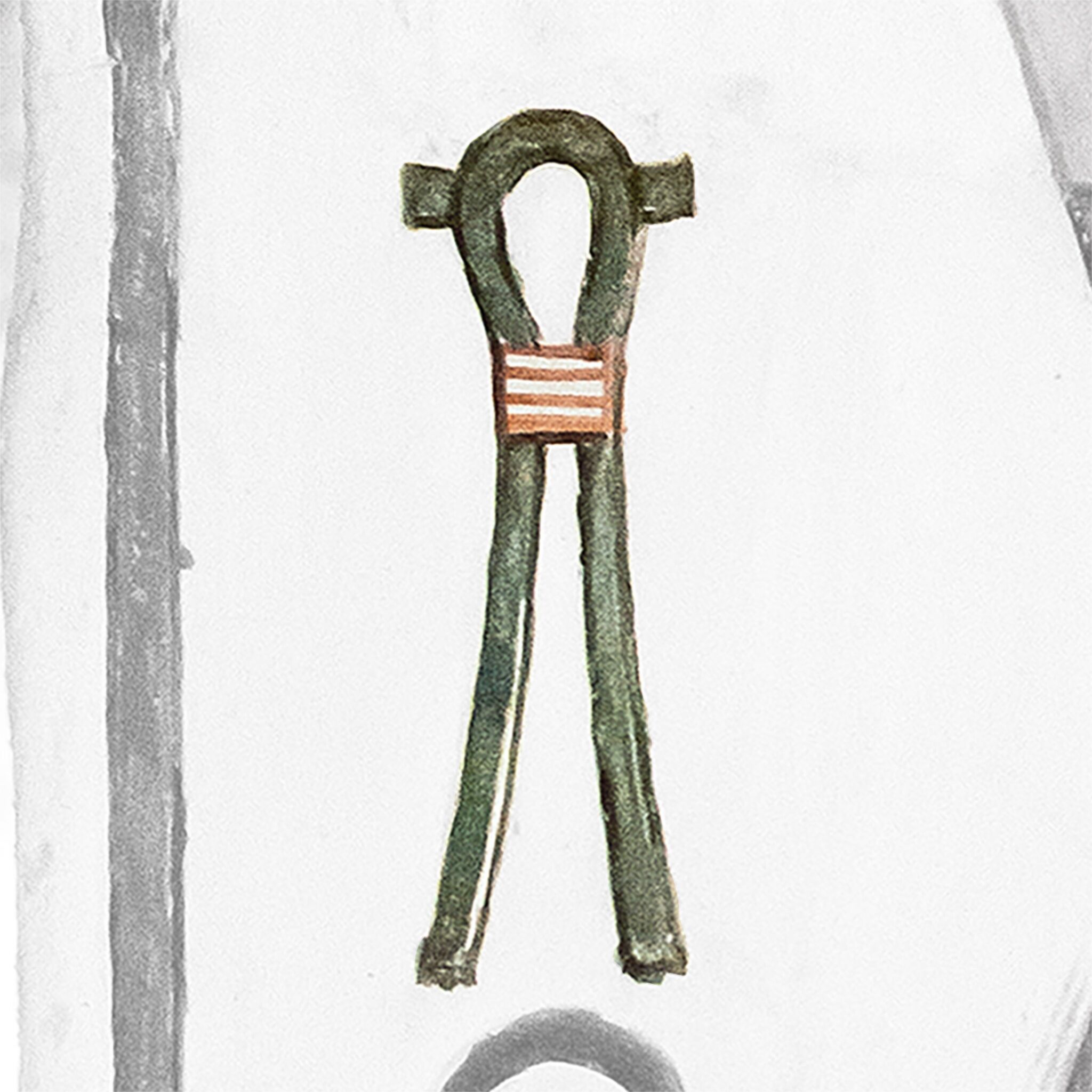 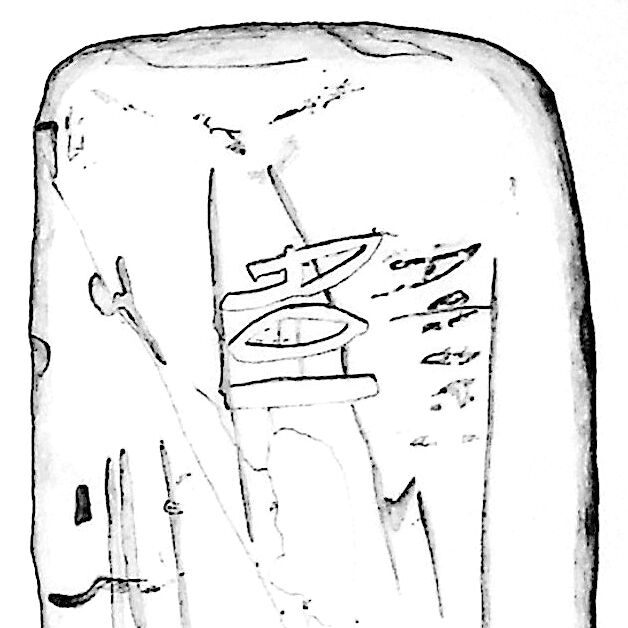