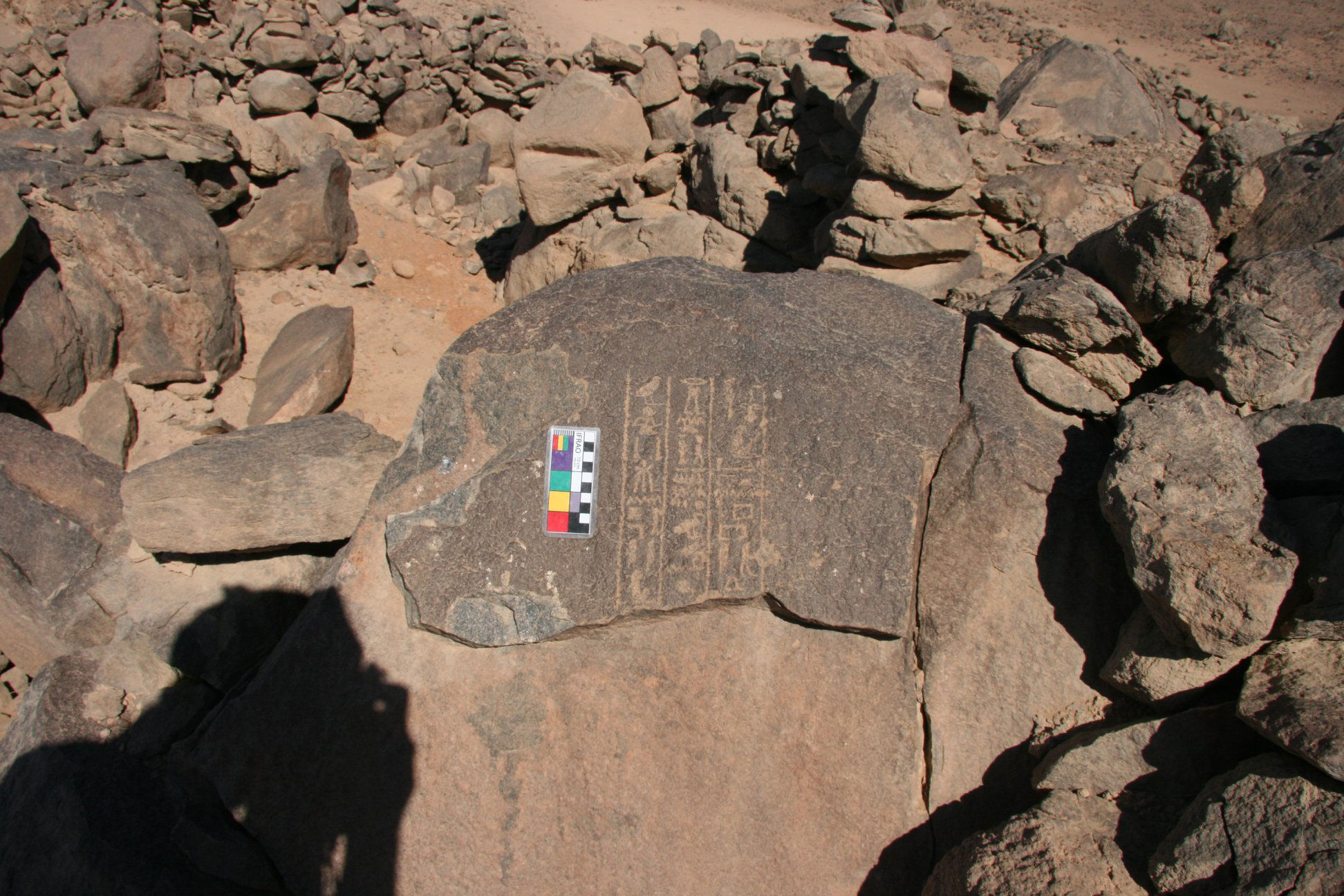 Wadi el-Hudi is an extensive mining site in the desert about 35 km southeast of Aswan where, in ancient times, Egyptians mined precious stones and minerals, including amethyst, galena and gold. Since 2014, the Wadi el-Hudi Expedition has been mapping, documenting, and excavating the 39 archaeological sites so far discovered, under the direction of Dr. Kate Liszka, of California State University San Bernardino, with the assistance of Bryan Kraemer, Chief Surveyor and Epigrapher, as well as Meredith Brand, Chief Ceramicist.

In order to increase the accuracy of the data and the speed of work, the Wadi el-Hudi Expedition has been incorporating new techniques into their archaeological documentation. According to the project’s website, the most important of these are:

The Wadi el-Hudi Expedition has also collaborated in a Princeton University study called “Semi-Automatic Digital Epigraphy from Images with Normals”, the aim of which is to present a user-guided system to produce digital epigraphy from photometric datasets. The process consists of segmenting the inscriptions from the rock surface and labeling them based on their carving techniques and rendering them in various non-photorealistic styles:

“We present a semi-automated system for converting photometric datasets (RGB images with normals) into geometry-aware non-photorealistic illustrations that obey the common conventions of epigraphy (black-and-white archaeological drawings of inscriptions). We focus on rock inscriptions formed by carving into or pecking out the rock surface: these are characteristically rough with shallow relief, making the problem very challenging for previous line drawing methods. Our system allows the user to easily outline the inscriptions on the rock surface, then segment out the inscriptions and create line drawings and shaded renderings in a variety of styles. We explore both constant-width and tilt-indicating lines, as well as locally shape-revealing shading. Our system produces more understandable illustrations than previous NPR techniques, successfully converting epigraphy from a manual and painstaking process into a user-guided semi-automatic process.”

“We begin with datasets captured at an ancient amethyst mining site in an area of Upper Egypt called Wadi el Hudi, which was documented in 1952 by [Ahmed] Fakhry. The terrain consists of several hills covered with granite rocks. The inscriptions are mostly located on the ridges and their position and surroundings make them hard to capture. The ridges are steep and the rocks on the ridges are usually loose, which makes it challenging to set up an acquisition system on the ground. Because of the environmental conditions, the recording must be done during the day under strong sunlight. Also, carrying heavy equipment or power sources to the site is impractical, since it takes a short hike to reach some of the inscriptions. However, the resolution of the acquisition system should still be high, because the inscriptions are mostly on flat surfaces with shallow depth. For these reasons, the most practical setup is one based on a camera and flash, in preference to 3D acquisition systems such as structured-light scanners, multi-view stereo, or a laser scanner.

The datasets are captured using a photometric acquisition setup. Specifically, a series of digital-SLR images of the object are captured with a fixed camera position, and a hand-held flash is moved around the object to obtain different light directions. A black cloth is used to shade the object and the camera. Several mirror and white diffuse spheres, which will be used to estimate the light directions and intensities in each image later, are placed next to the object. Also, one image with no flash is taken at the beginning of each capture session, which will be subtracted from all other images with flash to remove ambient lighting as much as possible. After the photometric datasets are captured, we use a variant of the photometric stereo algorithm to estimate surface normals and the true albedo from those images.”

“Our main challenge is to produce meaningful (shape-indicating), relevant (including the most representative features) drawings of archaeological inscriptions. Unfortunately, the signal-to-noise ratio is typically low: the inscriptions are shallow, while there is considerable noise caused by surface roughness. We briefly review how our datasets are acquired and rectified (Section 4), then divide the problem into two major components: finding and classifying the inscriptions with user-guided segmentation (Section 5), and then rendering them in different geometry-aware non- photorealistic styles (Section 6). We present results on a number of datasets, and argue that this type of stylization is difficult to achieve with previous methods (Section 7).”

Figure 16 below “demonstrates several styles of our epigraphy pipeline on one dataset. We demonstrate generating outlines of the inscriptions, adding surface details, giving relief effect to the grooves, stippling for shape depiction, and stippling to illustrate the surface details respectively.” “Results on several other rock inscriptions are shown in Figure 20, where the last two datasets are deeply engraved stones different than other rock inscriptions. We also demonstrate our system’s usability on non-inscription datasets in Figure 21.” 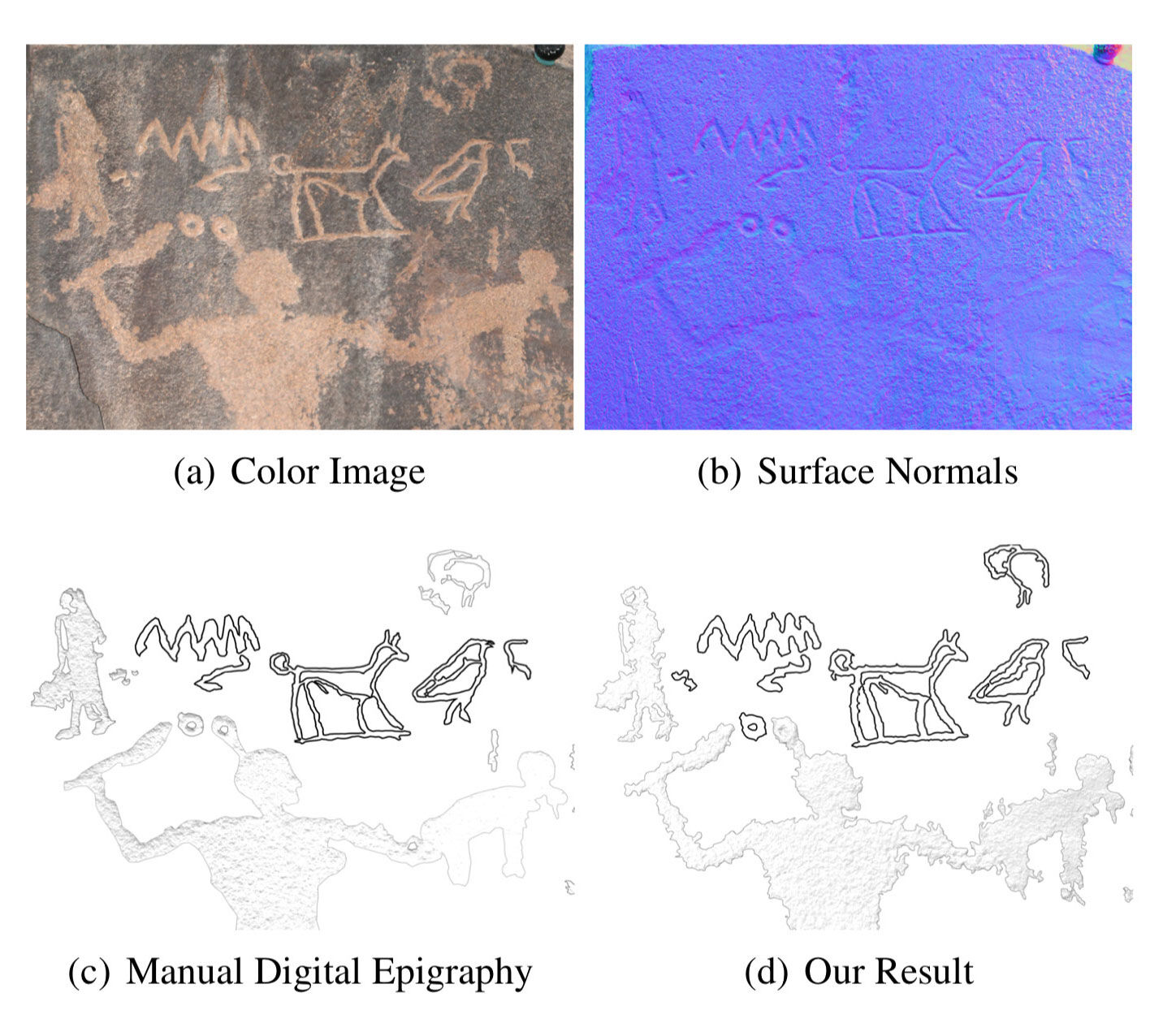 Figure 1: (a) Albedo and (b) Normal maps are estimated with a photometric stereo algorithm. (c) Digital epigraphy done manually on Adobe Photoshop and Illustrator in high precision by archaeologists which took 7-8 hours in total. (d) Result from our user-guided system which took 6-7 minutes.

Figure 4: (a), (b) Rectified inscription and normal map where the planar region to be rectified is defined by user. (c) User defined rotation axis (marked with red arrow) and flattened inscription. 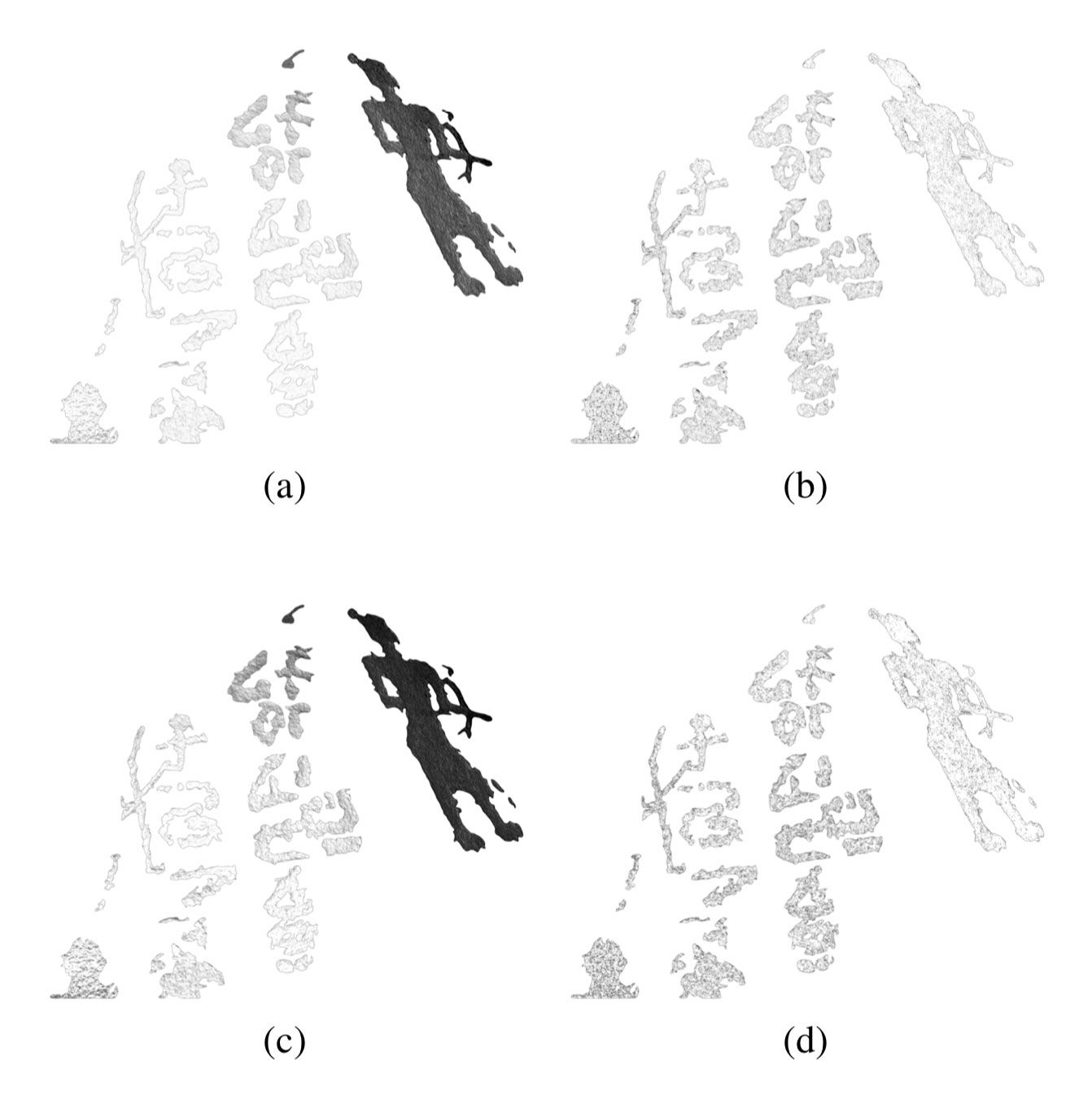 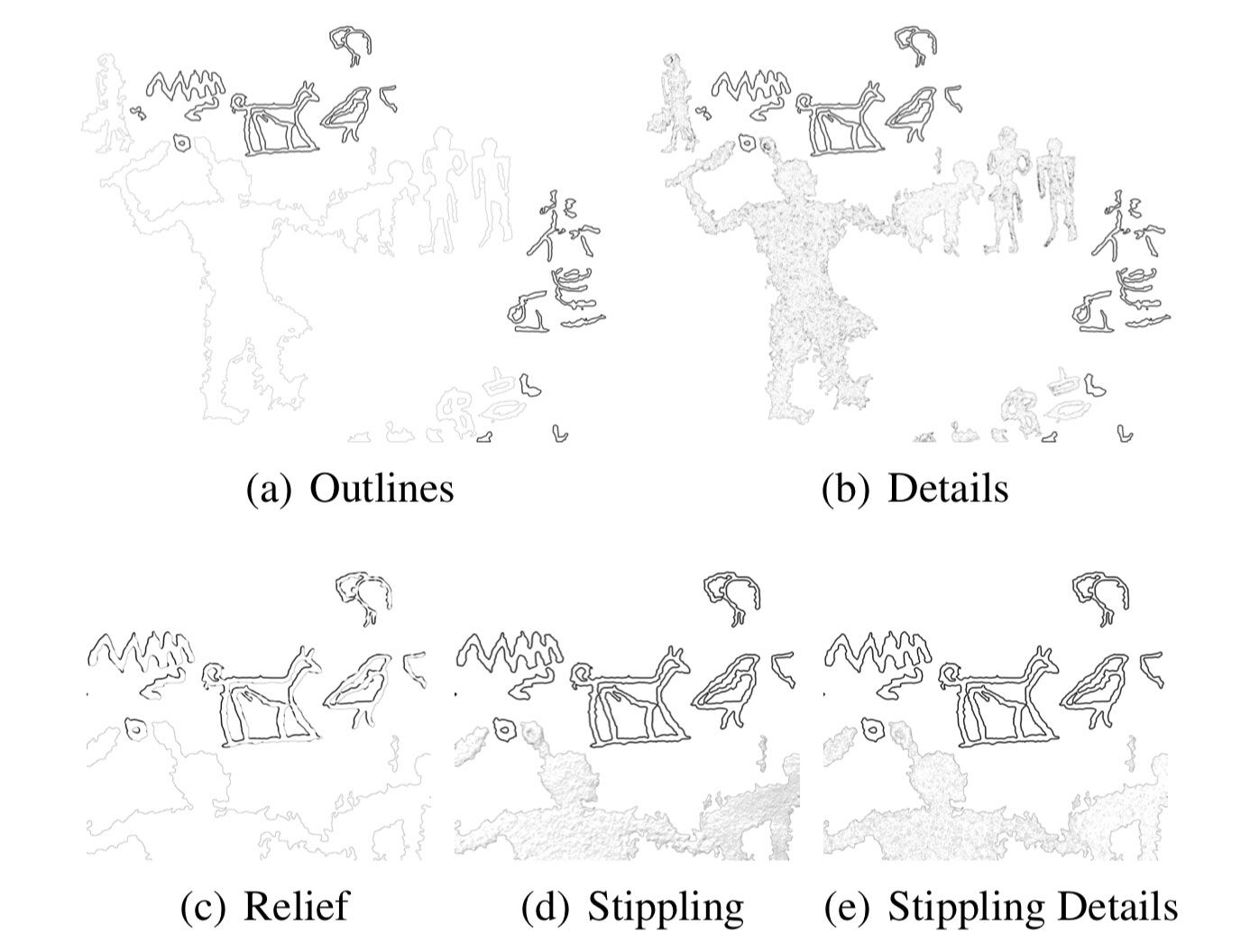 Figure 16: (a) Outlines of the inscriptions computed by the segmentation algorithm, grooves are drawn with thicker lines than pecked out regions. (b) Pecked out regions are textured by adding surface details using Equation 11. (c), (d), and (e) are closeup images showing relief, random stippling for shape depiction and stippling for detail illustration, respectively. 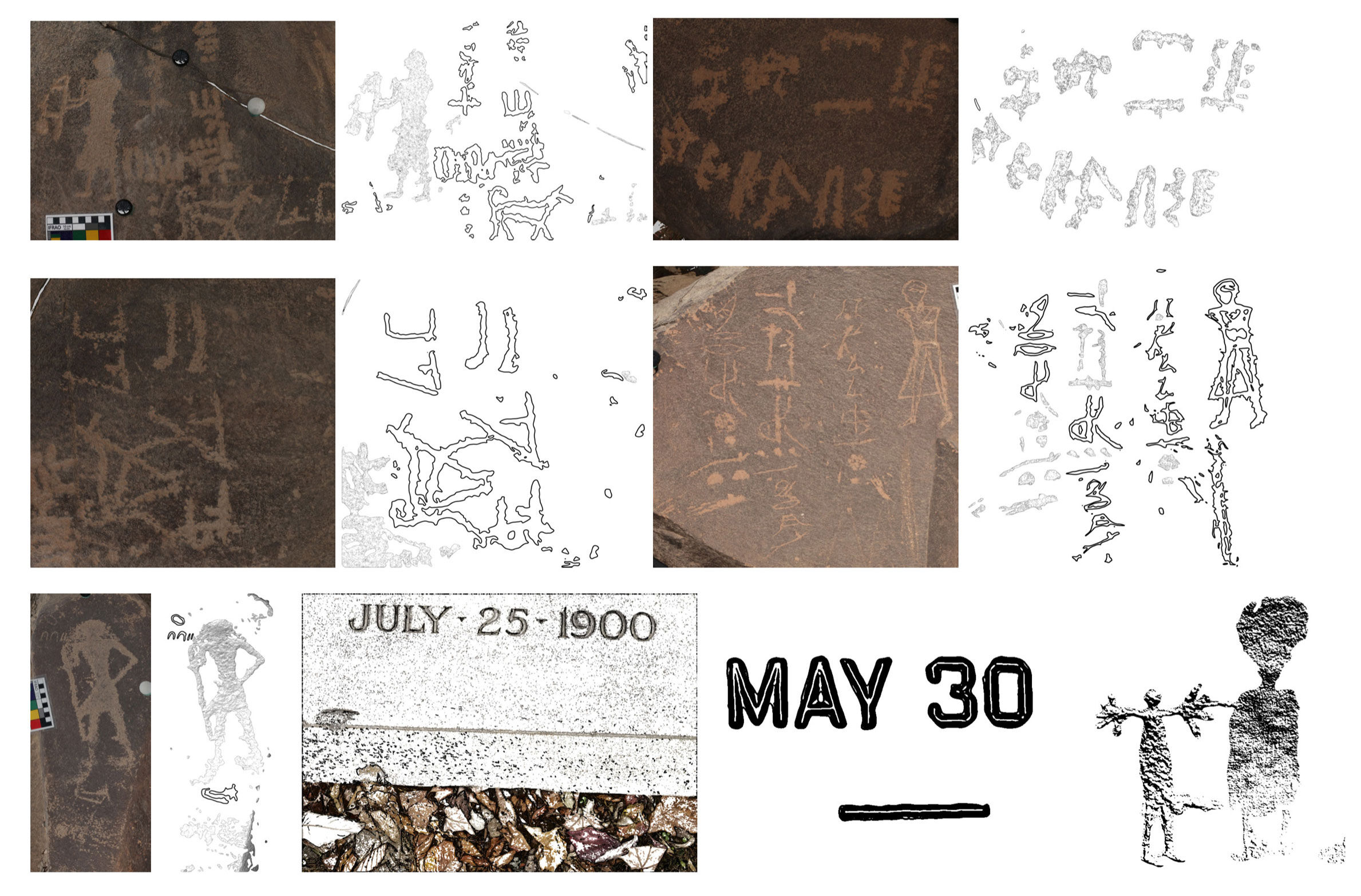 Figure 20: Results on several other datasets. 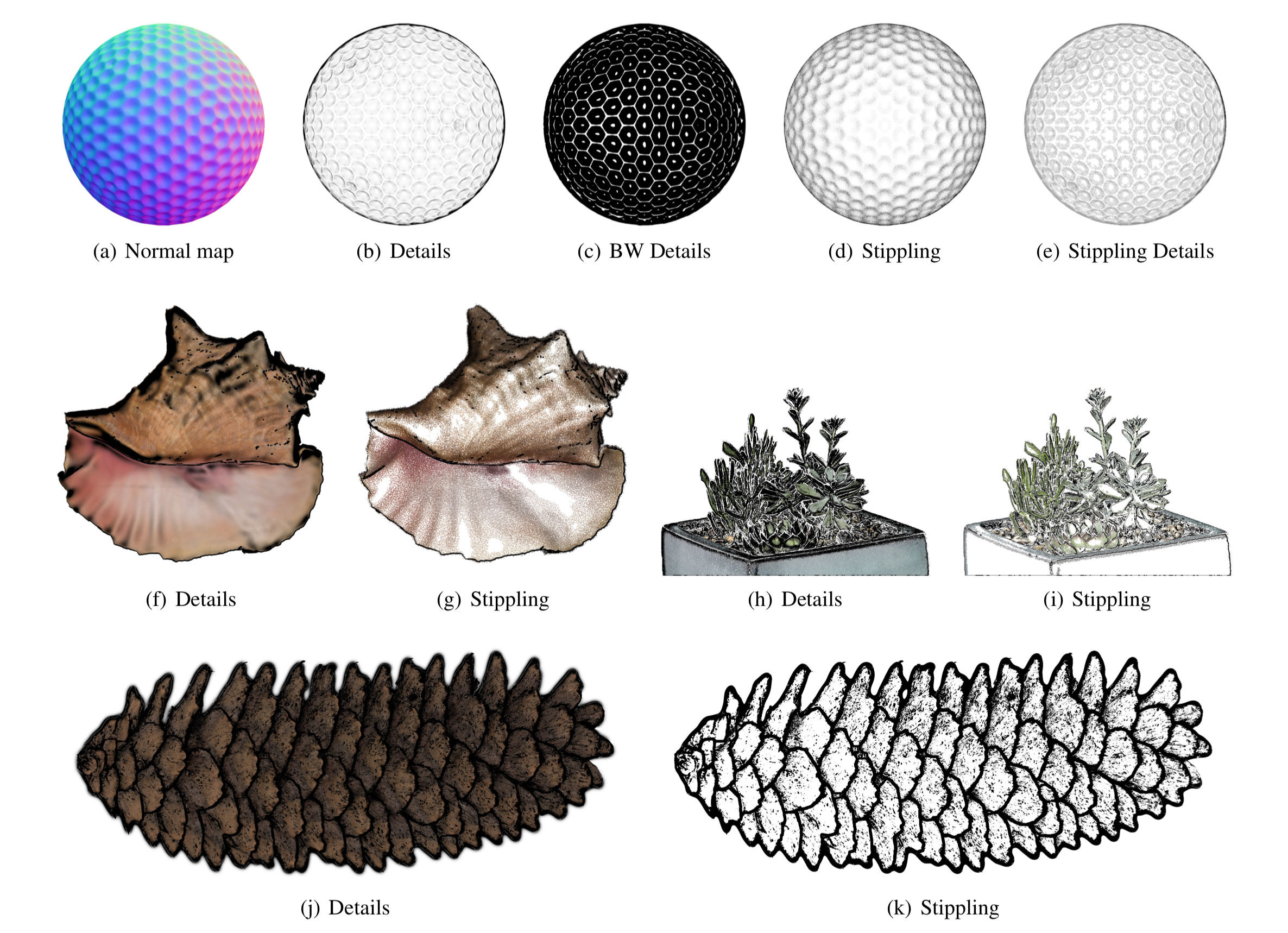 Figure 21: Several non-inscription objects are used with our system where we use the depth discontinuity to find the contours.

The original article about the Princeton University project appeared as: Berkiten, Sema, Xinyi Fan, and Szymon Rusinkiewicz, 2015. "Semi-Automatic Digital Epigraphy from Images with Normals,” in: Non-Photorealistic Animation and Rendering, edited by D. Mould and P. Bénard, 1-13.

For further information about the Wadi el-Hudi Expedition visit their website. To read more about the techniques, such as reflectance transformation imaging and photogrammetry, used to examine materials from the expedition, see the following article. 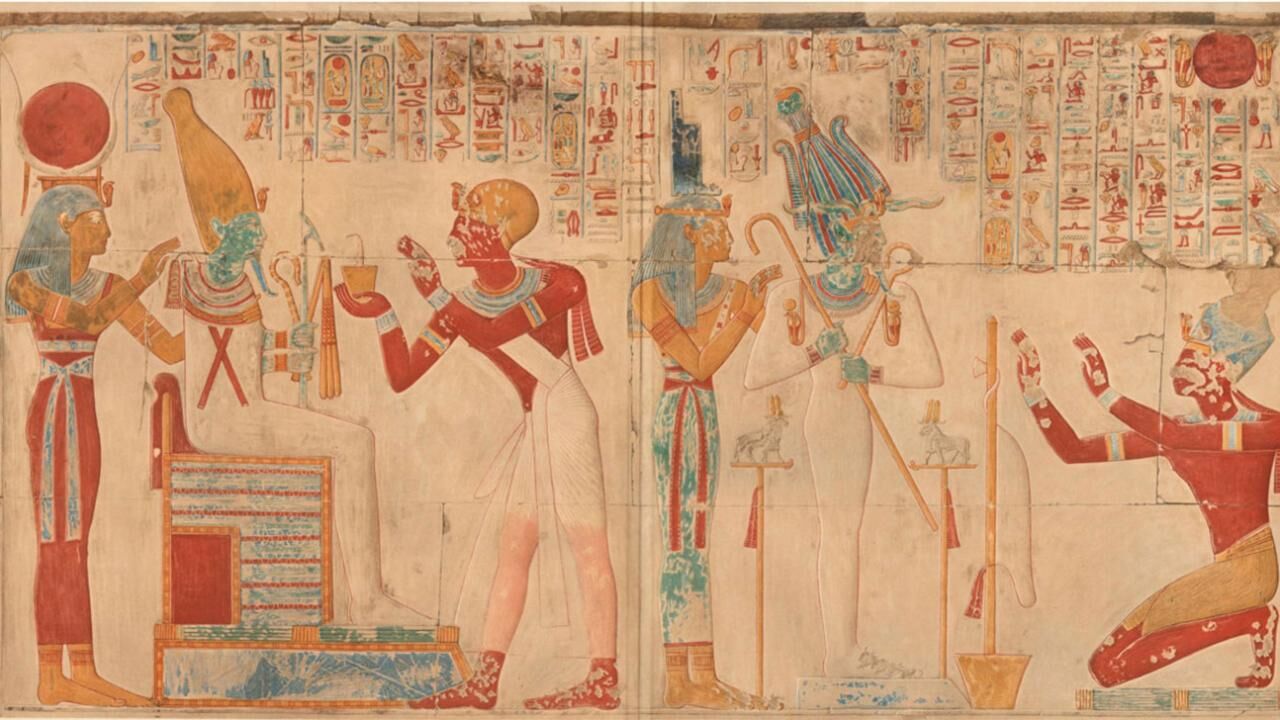 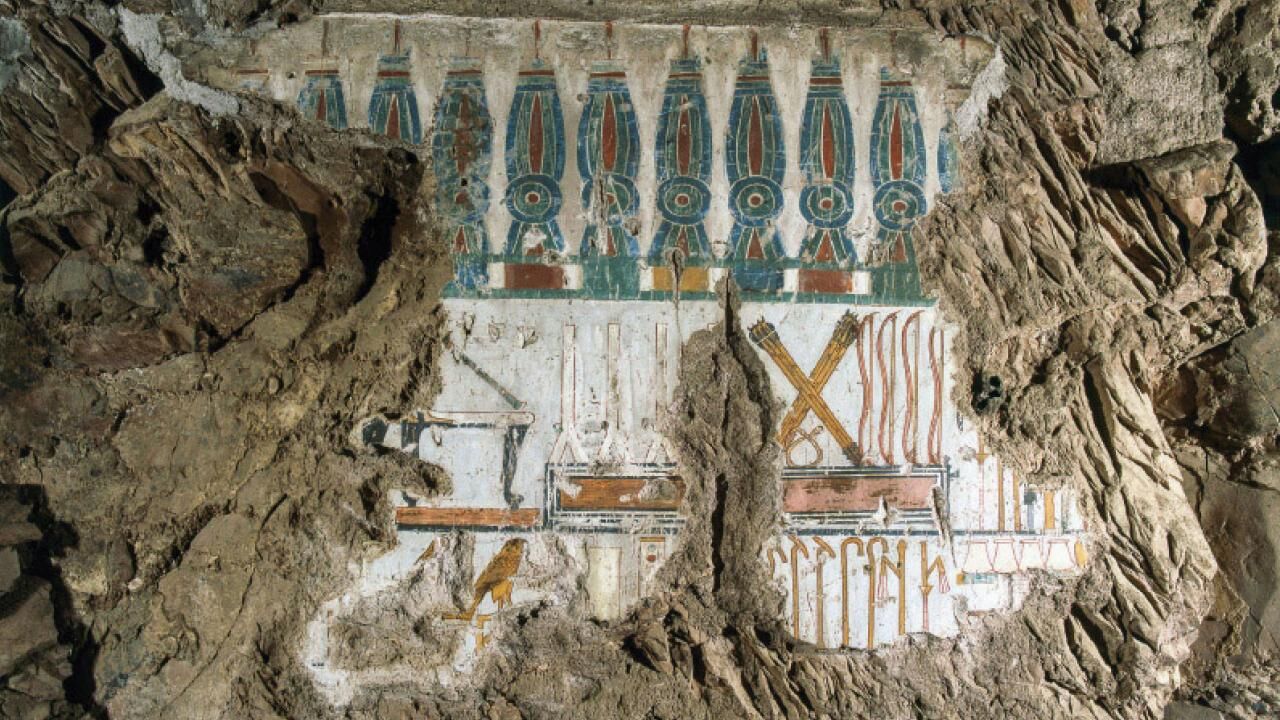 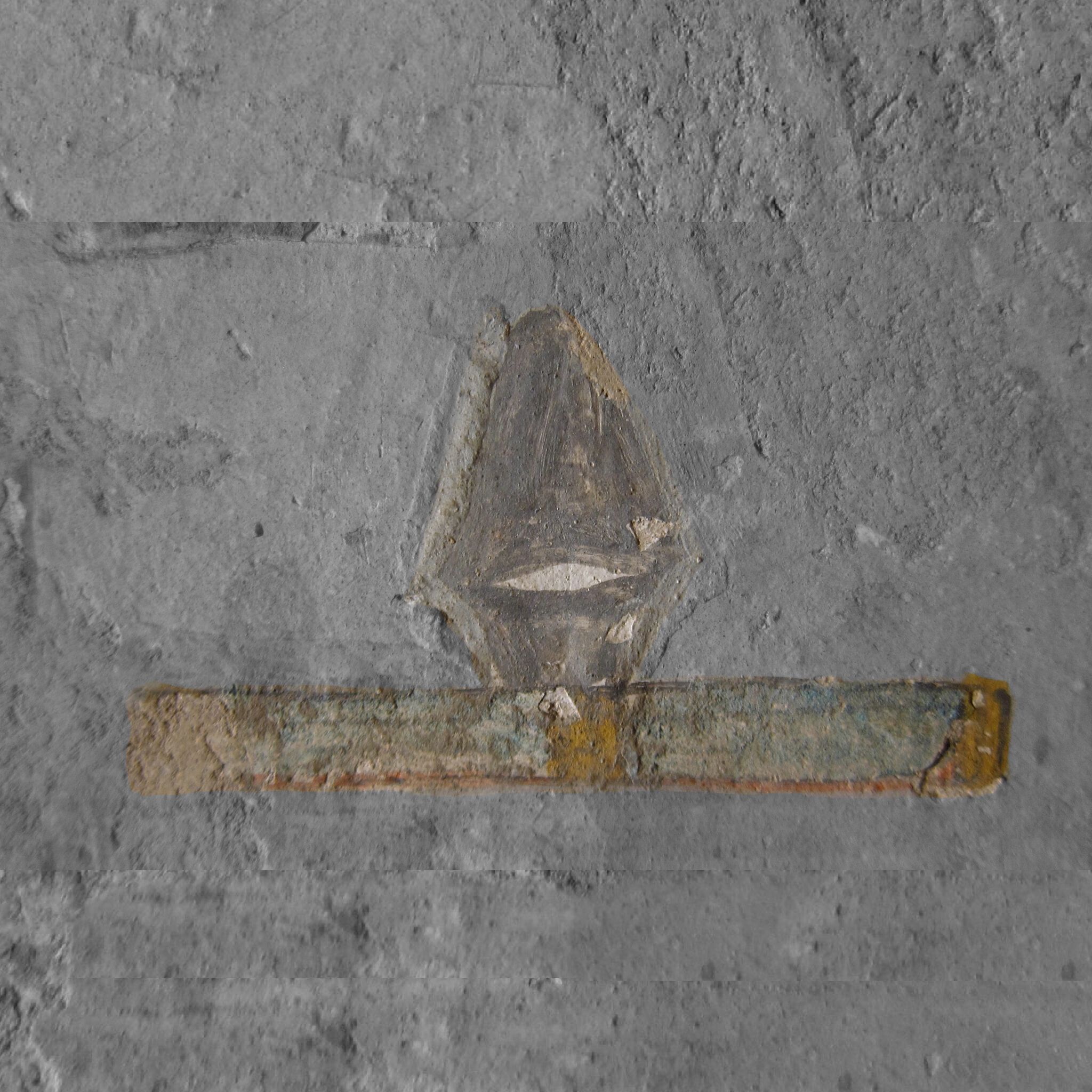 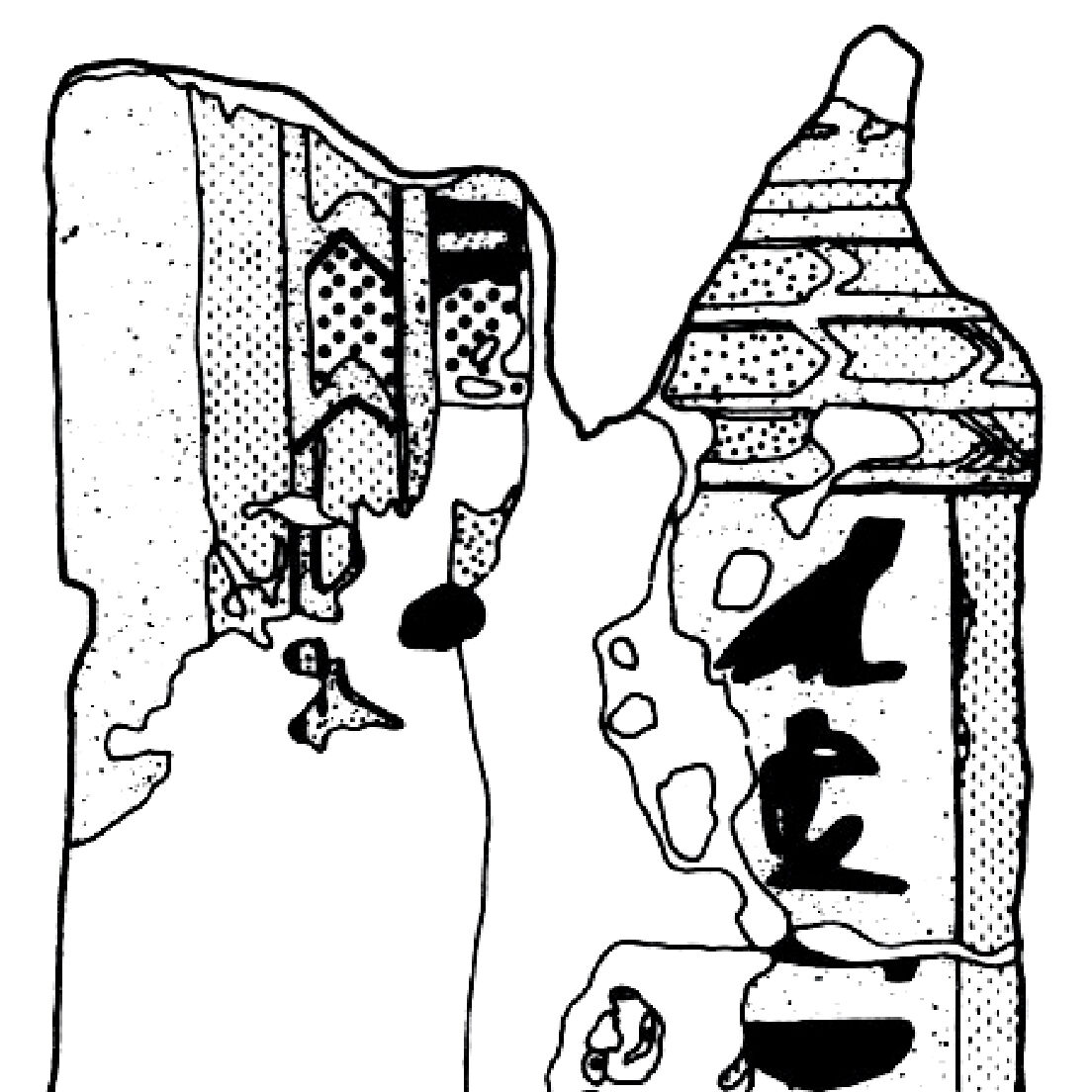