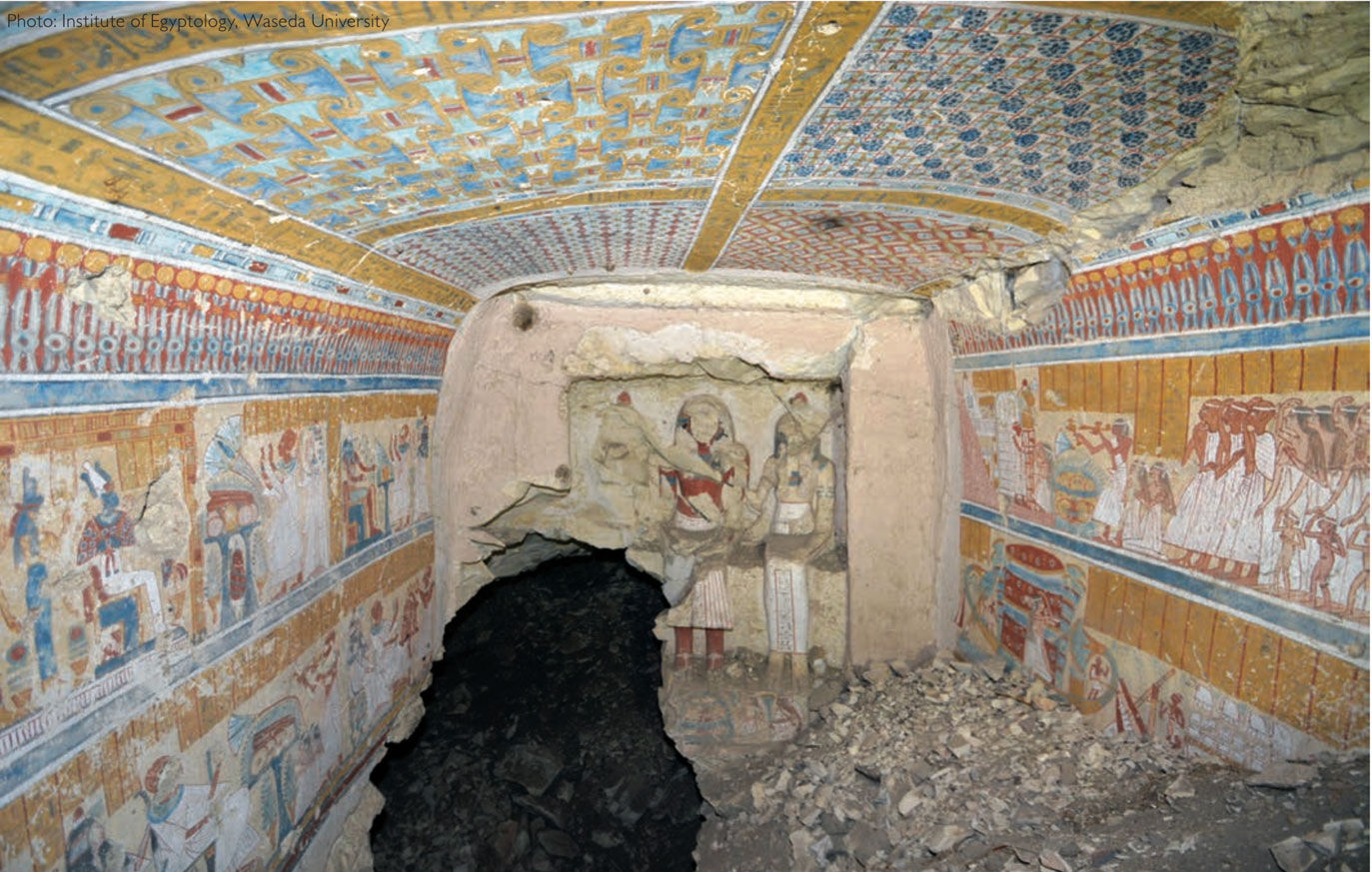 Tomb of Khonsuemheb, northern part of the transverse hall - statues of the tomb owner, his wife Mutemheb and her daughter Isetkha.

A Japanese expedition from the Institute of Egyptology at Waseda University, Tokyo has been working in the el-Khokha area in the Theban Necropolis since 2007 under the direction of Prof. Jiro Kondo. The team has rediscovered the tomb of Userhat (TT 47), Overseer of the King’s Private Apartment under Amenhotep III, and found the previously unknown tomb of Khonsuemheb, dating to the Ramesside period.

The mission’s work began with the clearance of the courtyard belonging to TT 47, which exposed a lintel bearing the name and title of the tomb owner: “Overseer of King’s Private Apartment, Userhat” (see images below). “The lintel is decorated with relief carvings of very high quality from the time of Amenhotep III, consisting of two scenes: on the right, Userhat worships Atum and a goddess (either Hathor or the Western goddess), while on the left there are images of Ra-Horakhty and Maat; the figure of Userhat on this side has been lost. In the centre of the lintel, the nomen and prenomen of Amenhotep III are inscribed under the sun disk.”

“In 2009, inscribed doorjambs were revealed on both sides of the entrance gate, each showing five columns of vertical incised hieroglyph inscriptions. At the bottom, we find the seated figure of the tomb owner, Userhat, with short inscriptions of his epithets and titles…

Two years later, in 2011, we rediscovered the rear wall of the transverse hall… The scene shows Userhat making offerings to Amenhotep III and Queen Tiye under a kiosk, the queen clearly identifiable by the remains of the tall twin feathers of her distinctive diadem. Amenhotep’s head is missing. In front of the kiosk are columns of hieroglyphic text. We also found a dyad of Userhat and his wife hewn on the southern side of the inner chamber behind the transverse hall.

“While cleaning the forecourt, in 2013 we came across the entrance of the previously unknown, unfinished tomb KHT 01, hewn out on the south wall of the forecourt. After entering, we found a part of yet another tomb, connected to KHT 01. This latter structure is beautifully decorated and in a good state of preservation. On stylistic grounds, we dated it to the Ramesside Period. The owner of the tomb we identified as Khonsuemheb, ‘Chief of the Storehouse of Mut’ as well as ‘Chief Brewer of the Temple of Mut’… The tomb of Khonsuemheb has a T-shaped plan. Most of the walls and ceilings of the transverse hall are decorated… On the eastern wall of the northern part of the transverse hall are depicted the funerary procession and the opening of the mouth ceremony for Khonsuemheb. Opposite, on the western wall, Khonsuemheb and his wife make adoration to Osiris and Anubis on the upper register, while his sons Ashaket and Penamun make offerings to Khonsuemheb and his wife on the lower. On the western wall of the southern part of the transverse hall, members of Khonsuemheb’s family make adoration, respectively, to Ra-Horakhty and Osiris. The eastern wall of that part of the hall is unfinished and decorated with line drawing in red ink. The ceiling is decorated with a number of different patterns, in the centre showing the solar boat, the text of the hymn to the sun god and two figures of Khonsuemheb making adoration.”

Line drawings; method not specified by the authors.

Lintel of the tomb of Userhat (TT 47), ‘Overseer of the King’s Private Apartment’.

Line drawing of the lintel from TT 47. 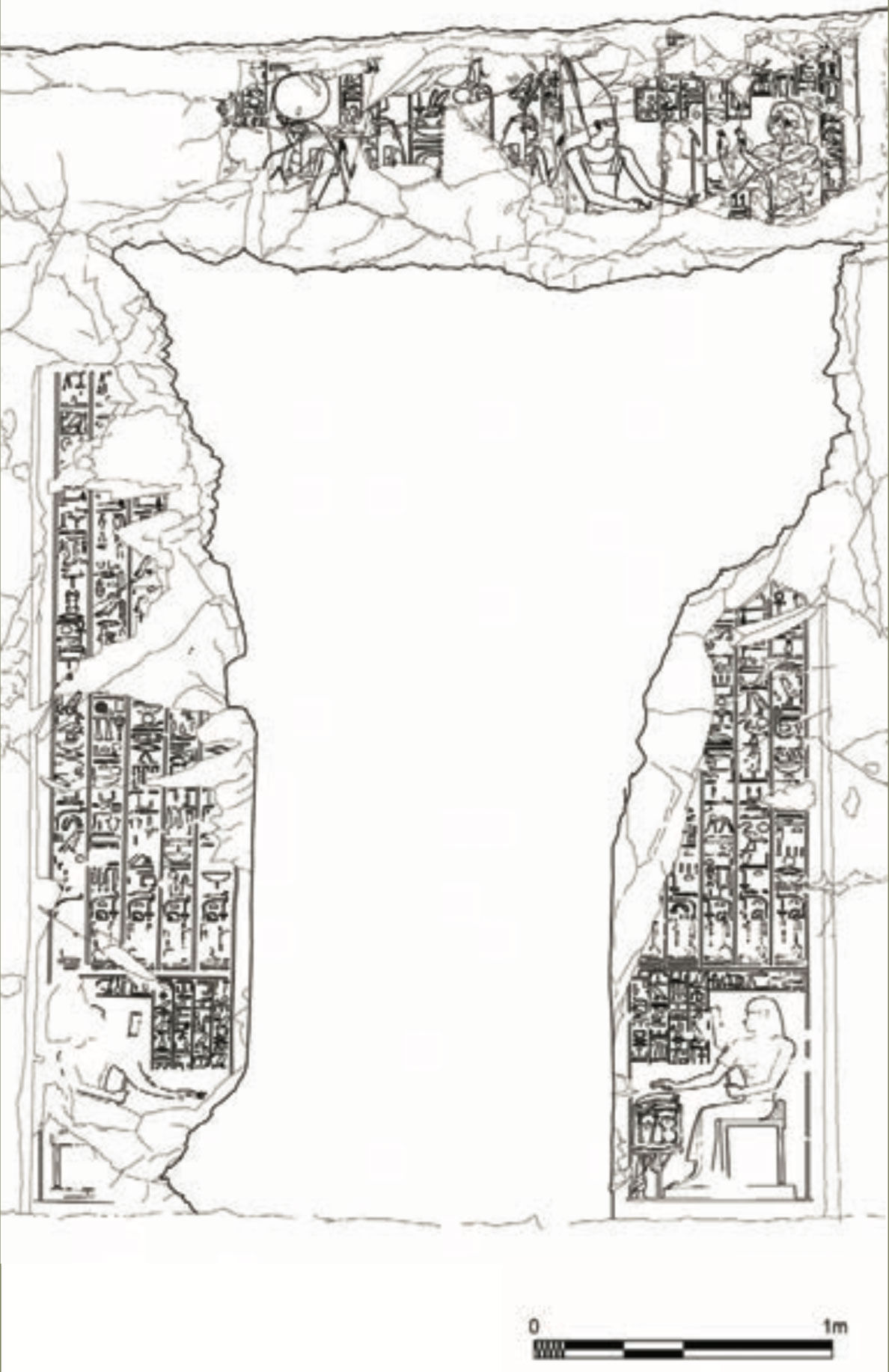 The inscribed doorjamb in the tomb of Userhat with the seated figure of the tomb owner and short inscriptions of his epithets and titles. (Photo and line drawing: Institute of Egyptology, Waseda University.)

For additional information about the many different projects carried out by the Institute of Egyptology, Waseda University, Tokyo, visit their website. 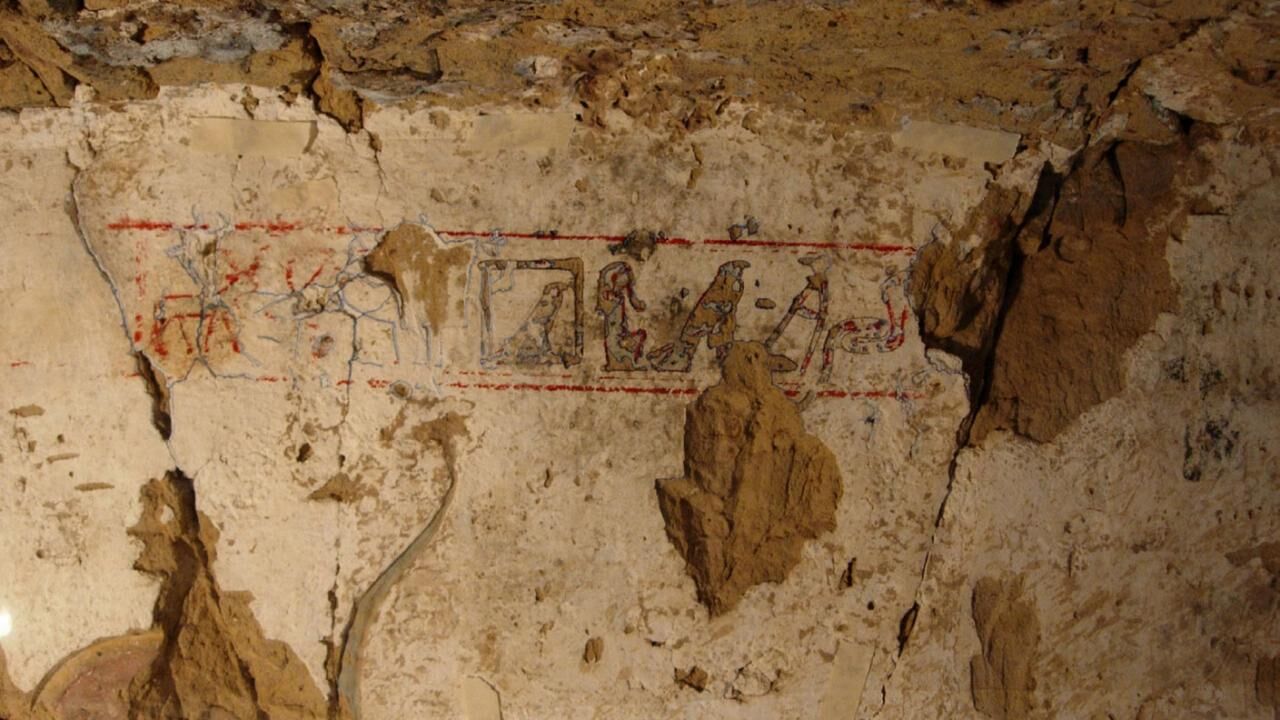 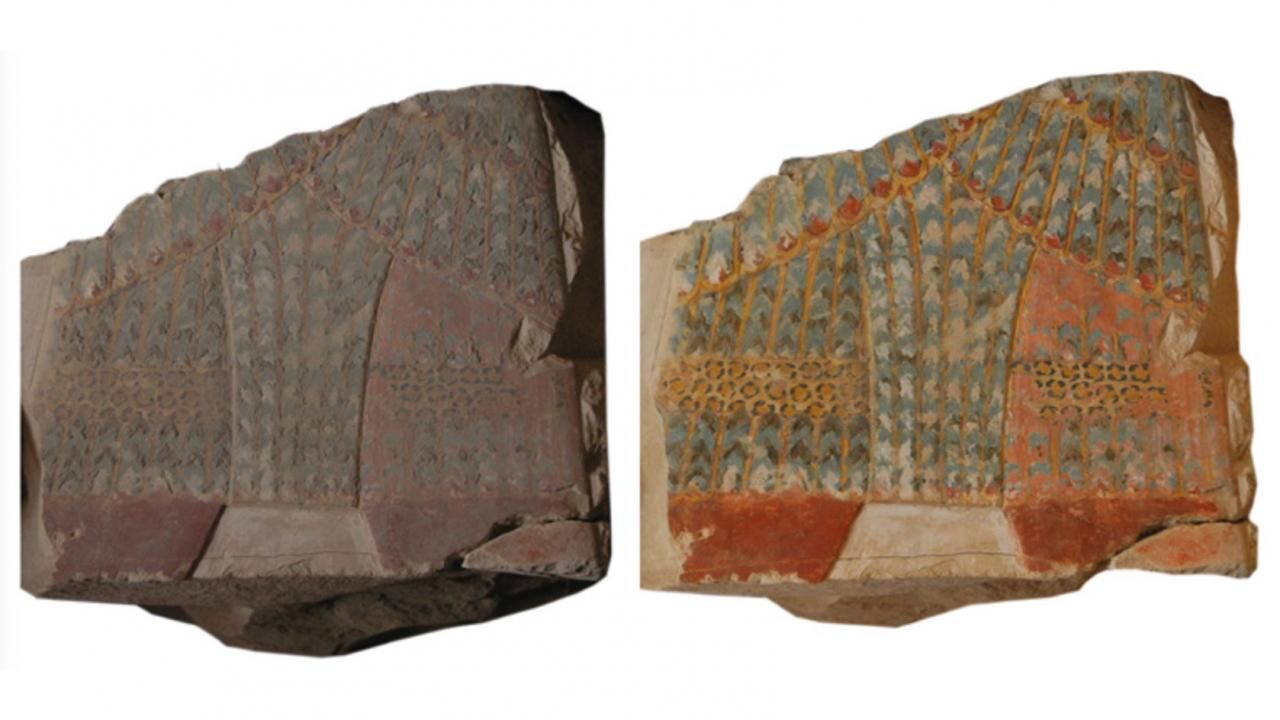 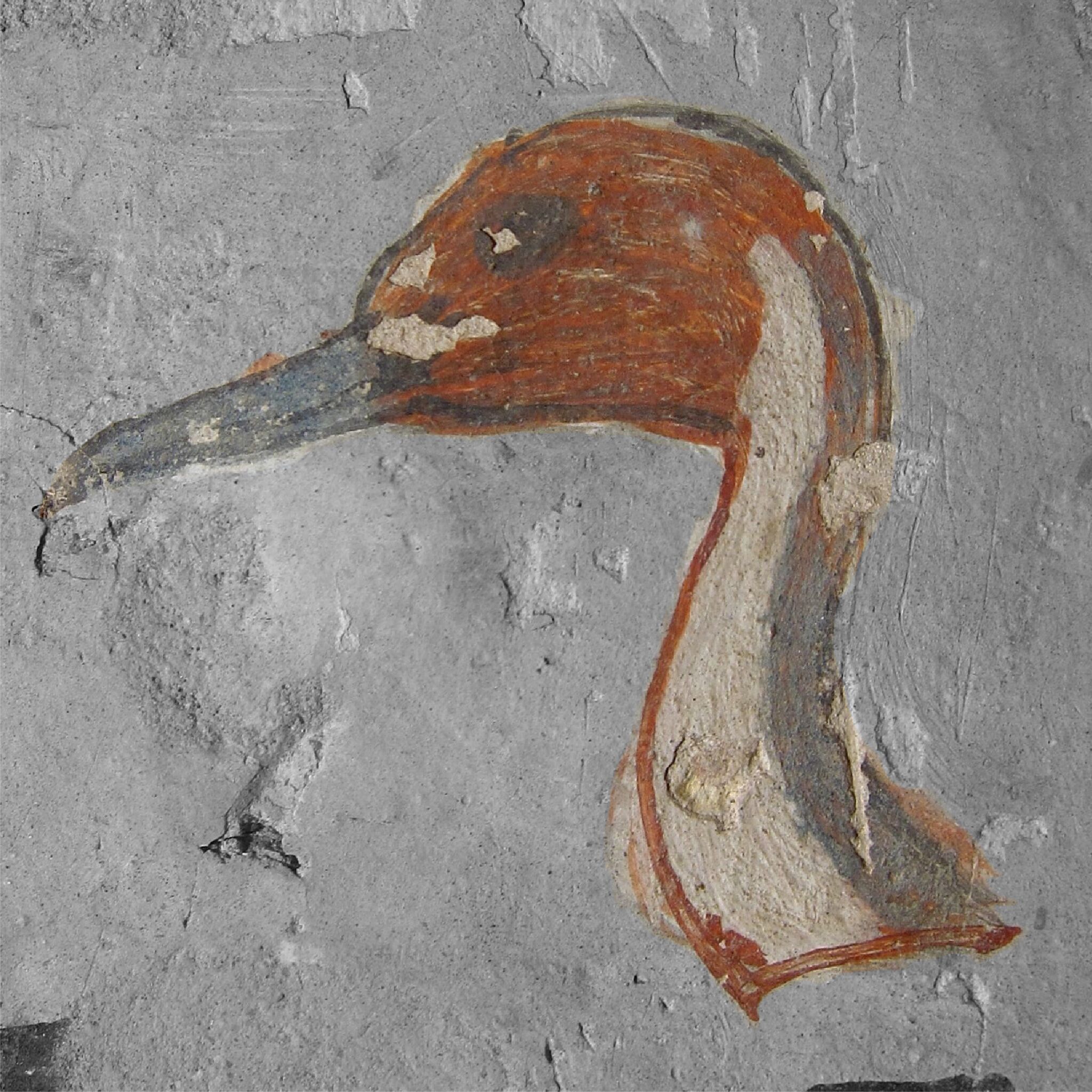 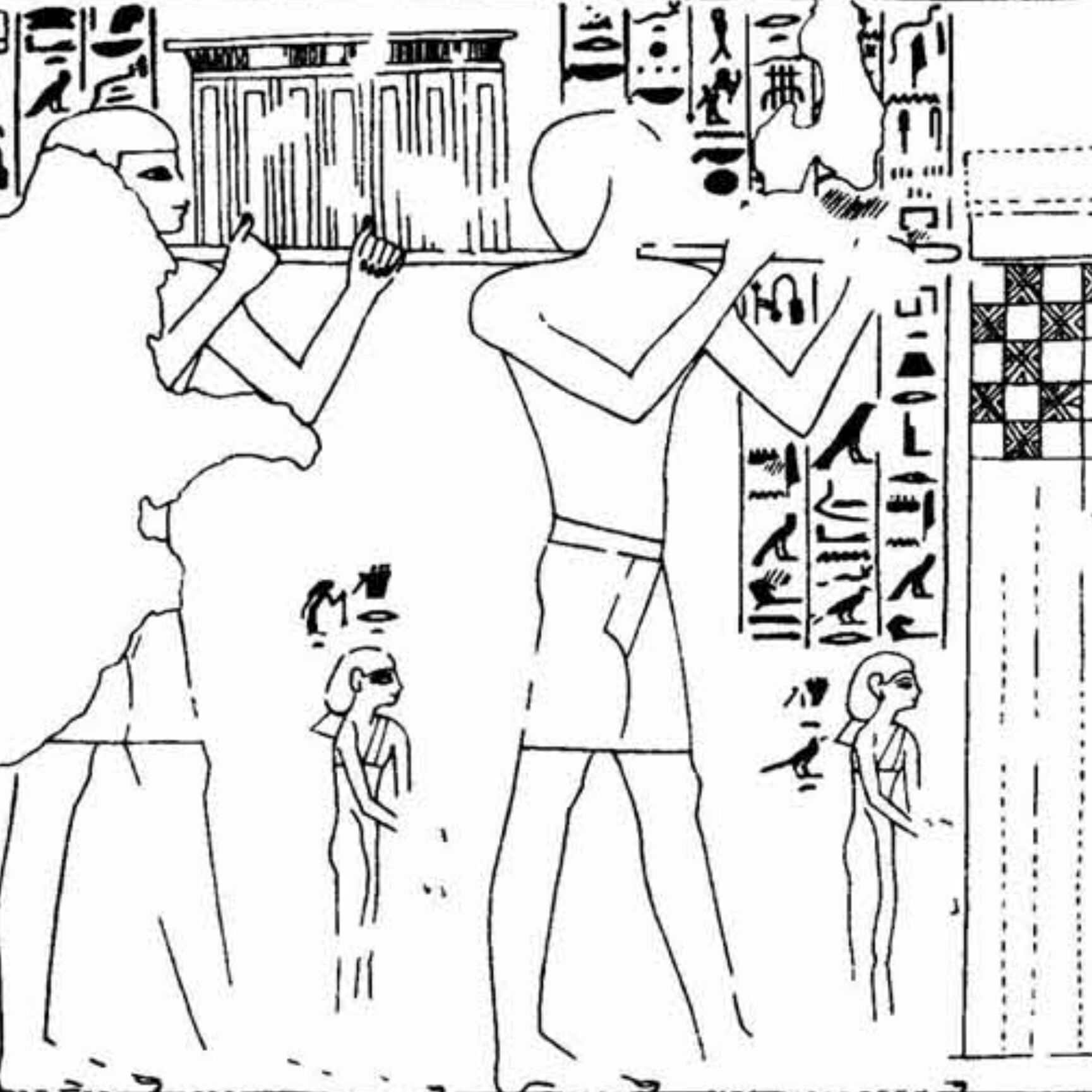