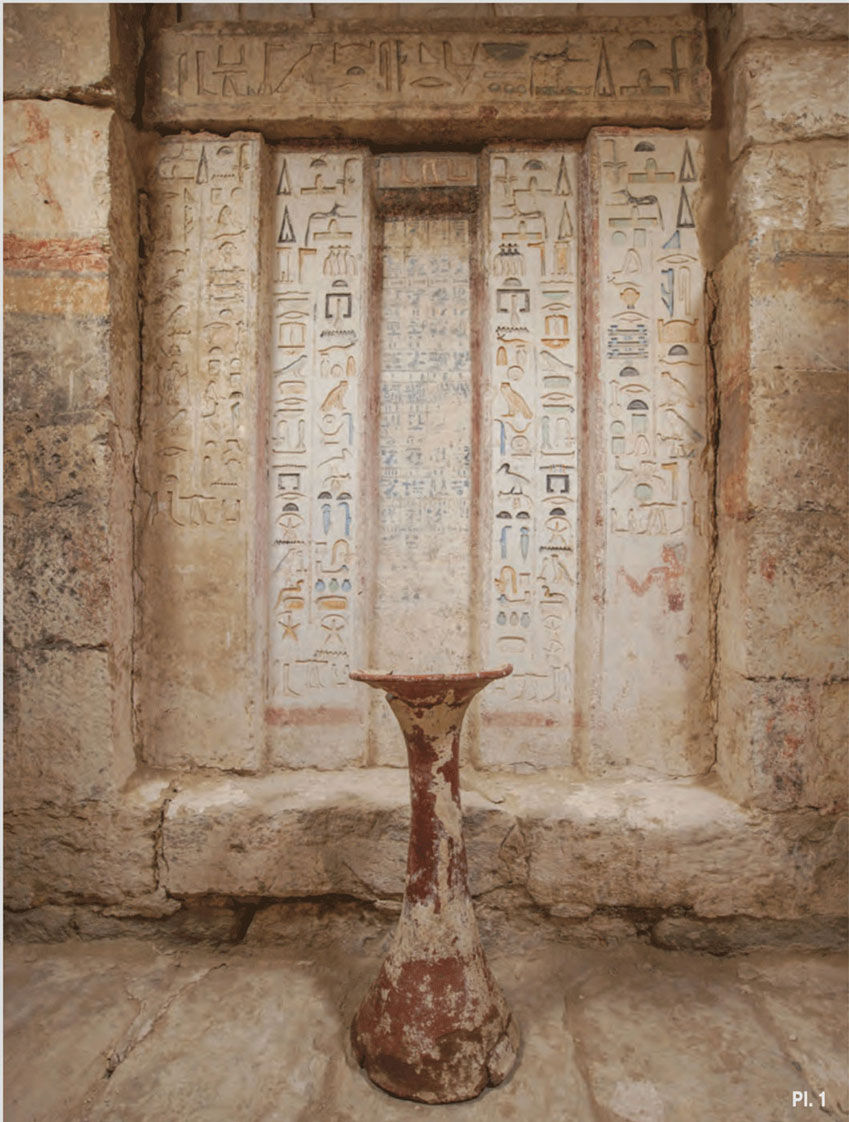 Kaisebi’s chapel with an offering stand after partial cleaning and reconstruction (photo by M. Frouz)

The Tomb of Kaisebi: The tomb’s limestone walls “were once decorated in colourful wall paintings. Unfortunately, only their lower parts were preserved in their original positions, all covered with a hard mixture of salt and sand… A few tiny, loose fragments of wall decoration were found in the fill of the funerary chapel. The short entrance corridor to the chapel was decorated with painted low relief. On the northern wall was a sailing scene, from which only two oars remained. Their orientation points to the movement of the boat inside the tomb. The southern part depicted men walking outside the chapel carrying birds. In the easternmost section, part of a calf’s head lying on the ground is still visible. The motifs of the northern and southern walls of the chapel were represented only by paintings (red outlines on a white base) that were couloured in showing the deceased, another man, a woman and offering bearers. Unfortunately, only the lower parts of the scenes have survived...”

The false door of Kaisebi “was found in situ set into the western wall of the chapel, its uppermost part with the funerary repast scene on the panel and the uppermost lintel with the offering formula are missing.” “The regular ritual purification activity performed in the chapel included repeated whitewashing of the false door, due to which the door seemed to be made of a white piece of stone with remains of sunken relief. However, the efforts of a restorer proved it to be beautifully decorated. Thanks to the layers of ancient whitewash, all the colours were protected, and after restoration, came out as strong and bright as if newly applied… The door itself was cut from white limestone of excellent quality and was partly painted red in imitation of more precious granite. The hieroglyphic signs included blue, green, black, orange and red colours.” 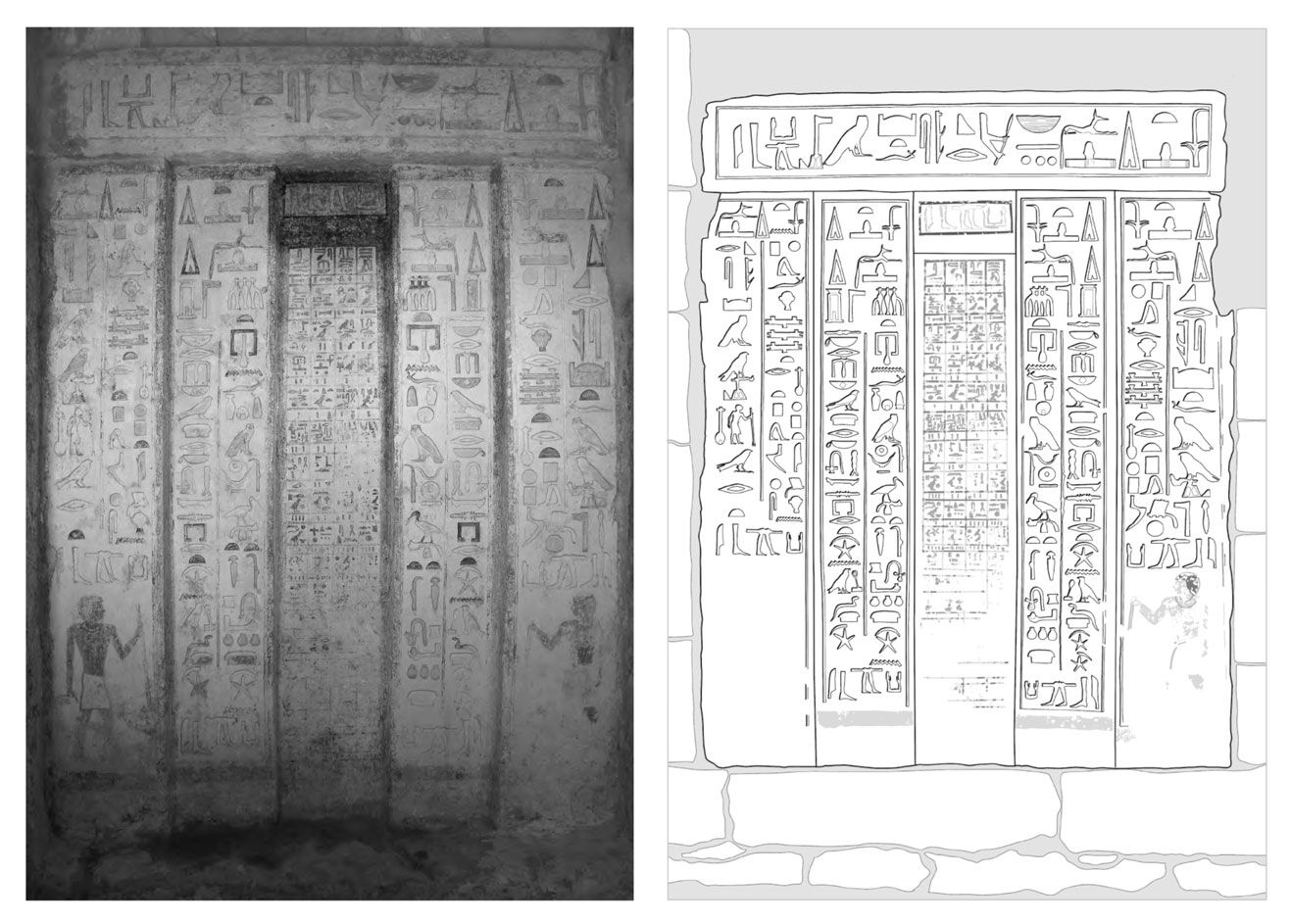 For the original context of the material appearing in this article see: Veronika Dulíková, Lucie Jirásková, Hana Vymazalová, Katarína Arias Kytnarová, Petra Havelková – The tombs of Kaisebi (AS 76) and Ptahwer (AS 76b) at Abusir South in: Prague Egyptological Studies (PES) 19 (2017): 3-26.

The same article complemented with a colour photograph appears here.

A further article reporting on the site in Czech appears here. 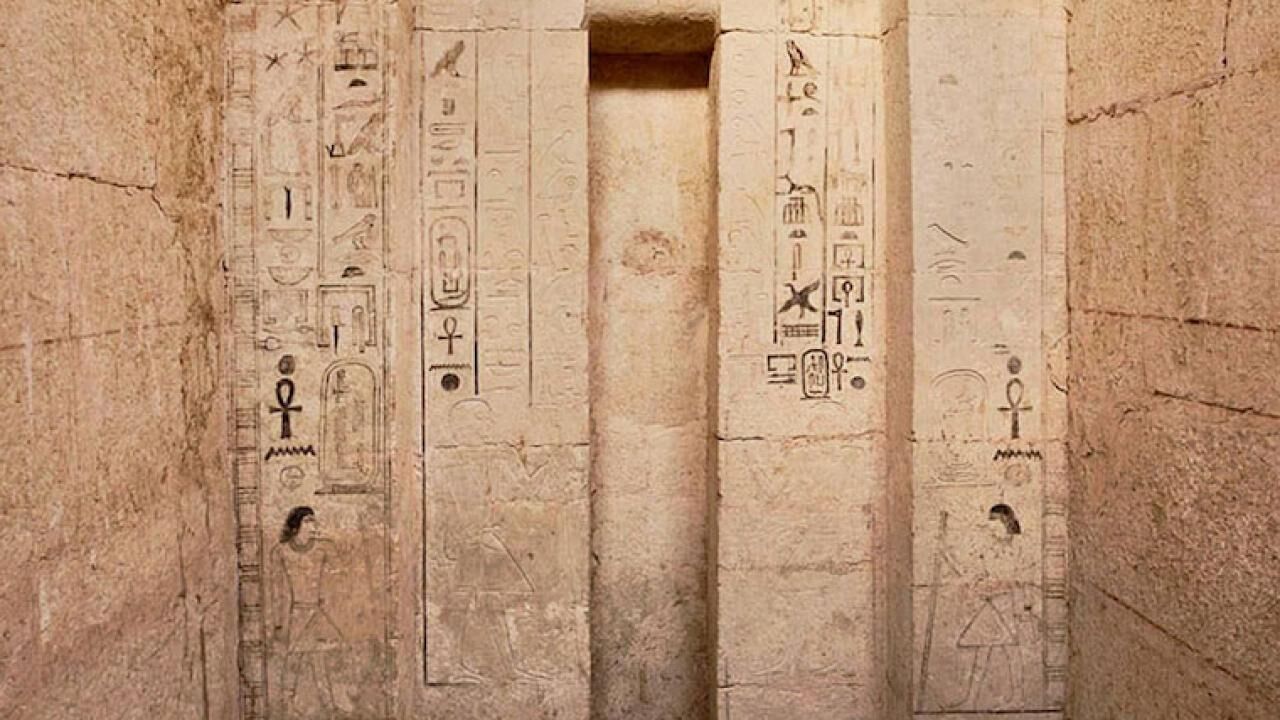 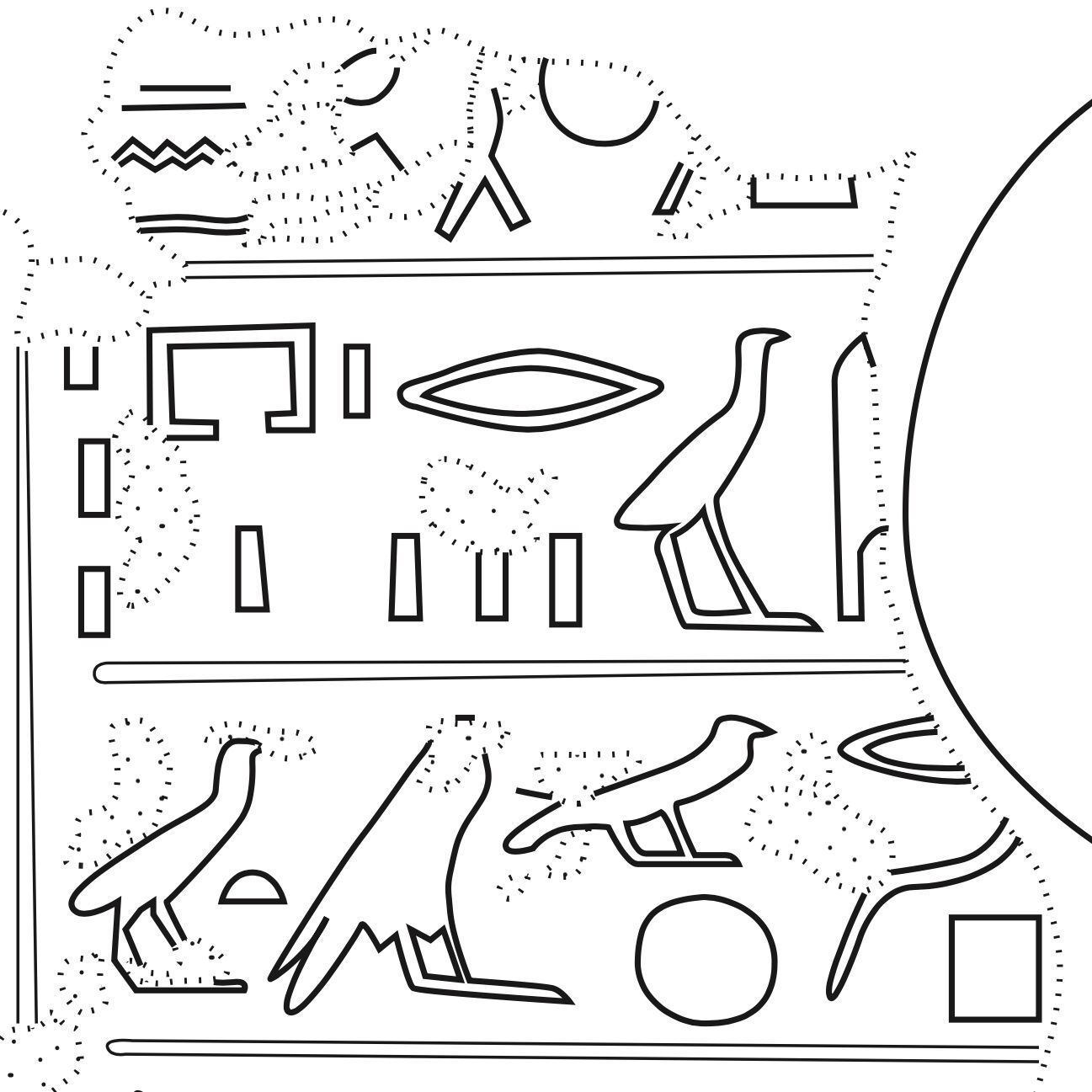 Upload your own
XP-PEN matures its artist pro line with usability upgrades, radical design changes and renewed focus on quality (Part 2) – Artist Pro 24
XP-PEN matures its Artist Pro line with usability upgrades, radical design changes and a renewed focus on quality (Part 1) – Innovator 16
Adonit’s brand new Note+ offers a lot of functionality for a reasonable price as long as you have the app for it
PaperLike 2 matte screen protector to provide a much-improved drawing surface on the iPad
A budget friendly drawing display packed with features: XP-Pen Artist 15.6 Pro (Holiday Edition)
Photoshop, dragged down by lackluster features, finally arrives to the iPad – Hands-on with Adobe’s long-awaited creative tool
A capable Photoshop remote for shortcut champions - TourBox controller review
Hands-on with MacOS Catalina running sidecar on iPad Pro – convenient but not an Astropad Studio killer just yet
The drawing display that wanted to be a tablet - Wacom Cintiq Pro 13 review
Wooden Canvas Smart Board Drawing Desk for the new (2018) iPad Pro 12.9-inch
Photoshop One-on-one – How to remove the background of scanned artworks in preparation for a digital takeover
A Photogrammetric Triple Constraint: Time, Distance, Camera Cost
On Developing a Digital Collation Process for the Epigraphic Survey’s Current Digital Documentation Projects
Photoshop One-on-one – General functions and a specific use-case of the updated Warp Tool
The most useful new features of Photoshop CC Part 3 - Saving brushes with their attributes
Physically based rendering (PBR) of Egyptian collection at Brooklyn Museum
Tidbits of the digital Chicago method Part 6 - Initiating selections and transformations in Procreate
Let's talk about... damage - representing discontinuity of decorative surfaces
Developing a digital color code pattern based on traditional, hand drawn examples
Let’s talk about… Ears – stylistic attributes and visual representation guidelines based on carved and painted examples