General view of the chapel's east wall, a feature from the tomb of Khnumhotep II at Beni Hassan

The Beni Hassan @ Macquarie project aims to provide a visual dictionary for all inscribed tombs of the Middle Egypt burial site Beni Hassan, including that of Khnumhotep II. Their website draws on published and unpublished material collected by the Macquarie University expedition (2009-present).

“Khnumhotep II served during the reign of pharaohs Amenemhat II and Senwosret II of the 12th Dynasty of the Middle Kingdom period (c. 1918-1884 BCE). He held the titles of 'hereditary prince', 'count', 'count of the town of Menat-Khufu' (an important local settlement near Beni Hassan), 'overseer of the Eastern Desert', 'overseer of priests' as well as priesthoods in a number of temples dedicated to deities such as Horus, Anubis and the lioness goddess Pakhet. The façade of the tomb is cut into the face of the cliff and, alongside the tomb of Amenemhat (Tomb 2), presents a most imposing and dominating symbol of the elite governance that was likely visible from the local settlement. The visual program in the tomb is almost completely intact and retains much of the original vibrant colour and intricate details.”

“The chapel’s east wall is reserved for river and marshland activities. The scenes are divided into three panels, each under one of the arches of the ceiling. Below the centre scene is an entrance to the inner shrine. The entrance is located directly opposite the entrance to the chapel. The lintel and jambs of the doorway are decorated with formulaic hieroglyphic inscriptions requesting offerings for the deceased. Geometric patterns and a ẖkr-frieze are painted below each of the three ceiling arches. Two large representations of the tomb owner fishing and fowling dominate the panels either side of the shrine’s entrance. The left panel features the tomb owner on a papyrus boat catching fowl in the marshlands. Below the left panel is a narrow register devoted to a scene of men fishing with a dragnet. The right panel features the tomb owner spear fishing in the. The narrow register below the right panel features fighting boatmen. The shorter, centre panel above the shrine entrance depicts the tomb owner catching birds with a clap net.”

“The doorway leading into the shrine is cut into the centre of the chapel's east wall… The doorway is defined by two jambs 0.61m wide x 2.77m high and a lintel 2.30m wide x 1.03m high, … and inscribed in incised relief. The entrance to the shrine is located beneath the depiction of Khnumhotep fowling with the clap net and is directly opposite the entrance to the chapel. Below the text on both sides is a representation of the tomb owner seated on an ebony chair with a cushioned low back. He wears a shoulder-length wig, a collar, sash, and a short kilt with an apron, and holds a staff in one hand and a folded cloth in the other.”

“The Beni Hassan Visual Dictionary contains accessible descriptions of the various themes, scenes, details and architectural features in a tomb, Jsesh transcriptions, transliteration, and translation of the hieroglyphic inscriptions, in addition to high resolution zoomable photographs and line drawings.”

“Prior to the work undertaken by the ACE, the earlier, and frequently cited, records of the tombs at Beni Hassan include works published by C.R. Lepsius as part of the Prussian Expedition to Egypt (1849); P. Newberry and his colleagues under the auspices of the Egypt Exploration Fund (1893); and the water colour copies of selected scenes and motifs from the tomb of Khnumhotep II by N. de Garis Davies as part of the Metropolitan Museum of Art New York's Graphic Expedition to Egypt (1931).”

“Work undertaken by the ACE highlighted that the earlier records of Lepsius and Newberry are frequently inaccurate and, furthermore, that some material was deliberately omitted. In particular, the line drawings of the walls published by Newberry are inadequate by modern standards as the figures and hieroglyphs as well as selected animal figures and inanimate objects are inexplicably rendered in solid black, obscuring many significant details.”

“The tombs of Khnumhotep II (Tomb 3), Amenemhat (Tomb 2), Ipi and Bebi have been re-recorded and published by Naguib Kanawati, Linda Evans and Miral Lashien respectively, while the tombs of Khnumhotep I (Tomb 13), Khety (Tomb 17) and Baqet III (Tomb 15) are currently in preparation for publication via the ACE Reports series.” 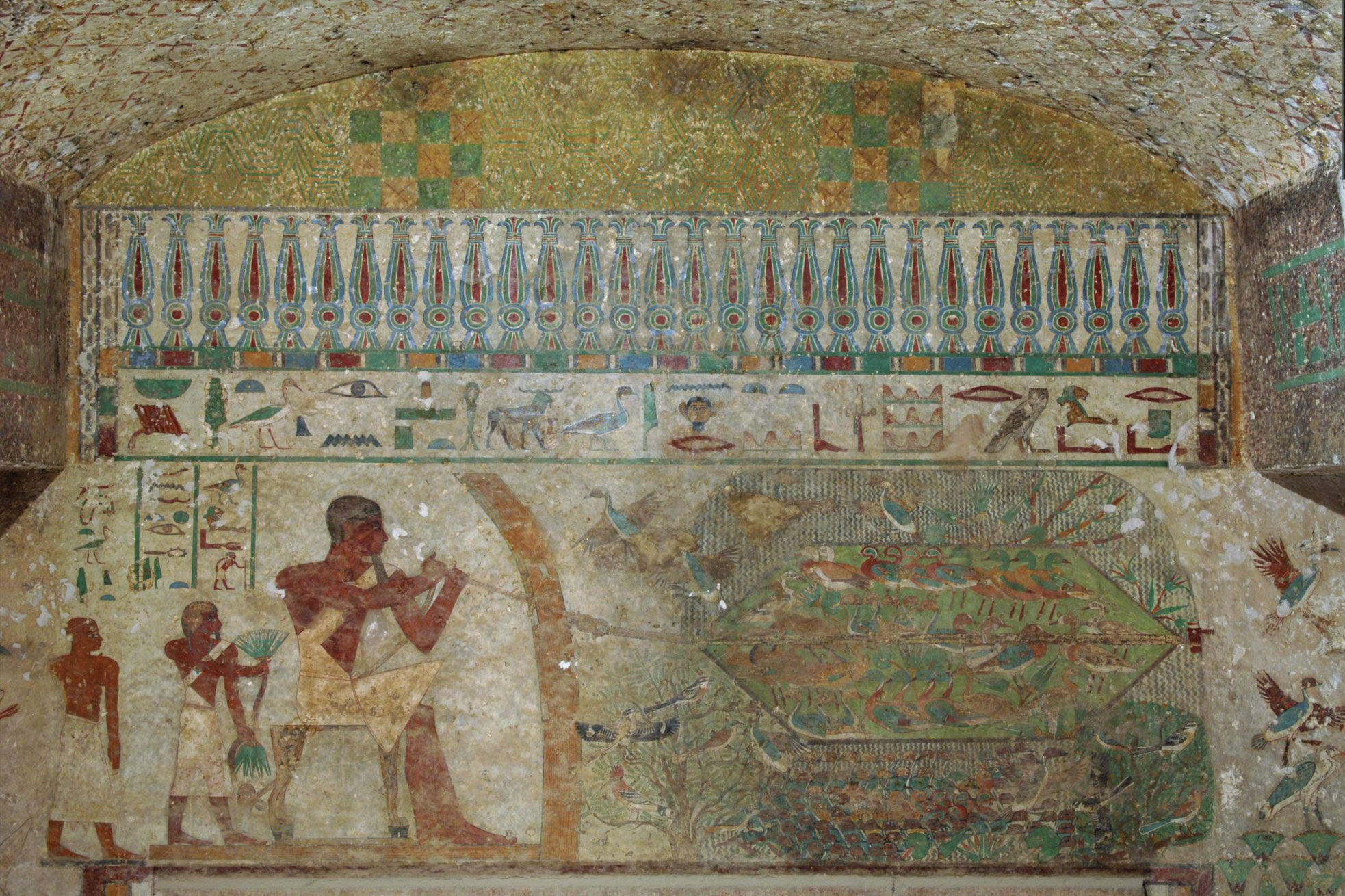 Tomb owner catching birds with a clap net, a scene from the tomb of Khnumhotep II at Beni Hassan General view of the chapel's east wall, a feature from the tomb of Khnumhotep II at Beni Hassan (Drawing by Kanawati and Evans, 2014) Tomb owner catching birds with a clap net, a scene from the tomb of Khnumhotep II at Beni Hassan (Drawing by Kanawati and Evans, 2014) 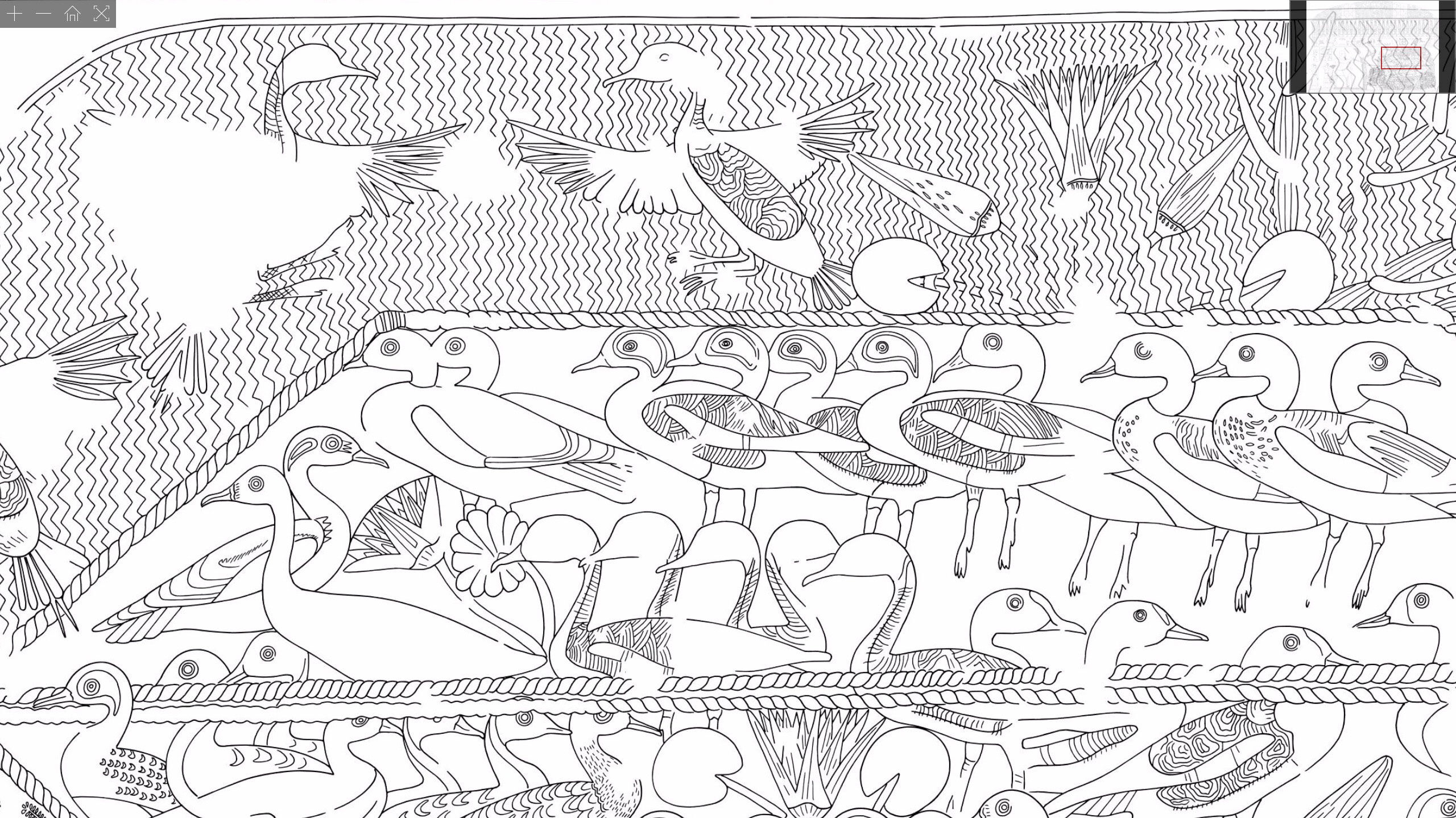 Tomb owner catching birds with a clap net, a scene from the tomb of Khnumhotep II at Beni Hassan (Detail - drawing by Kanawati and Evans, 2014) 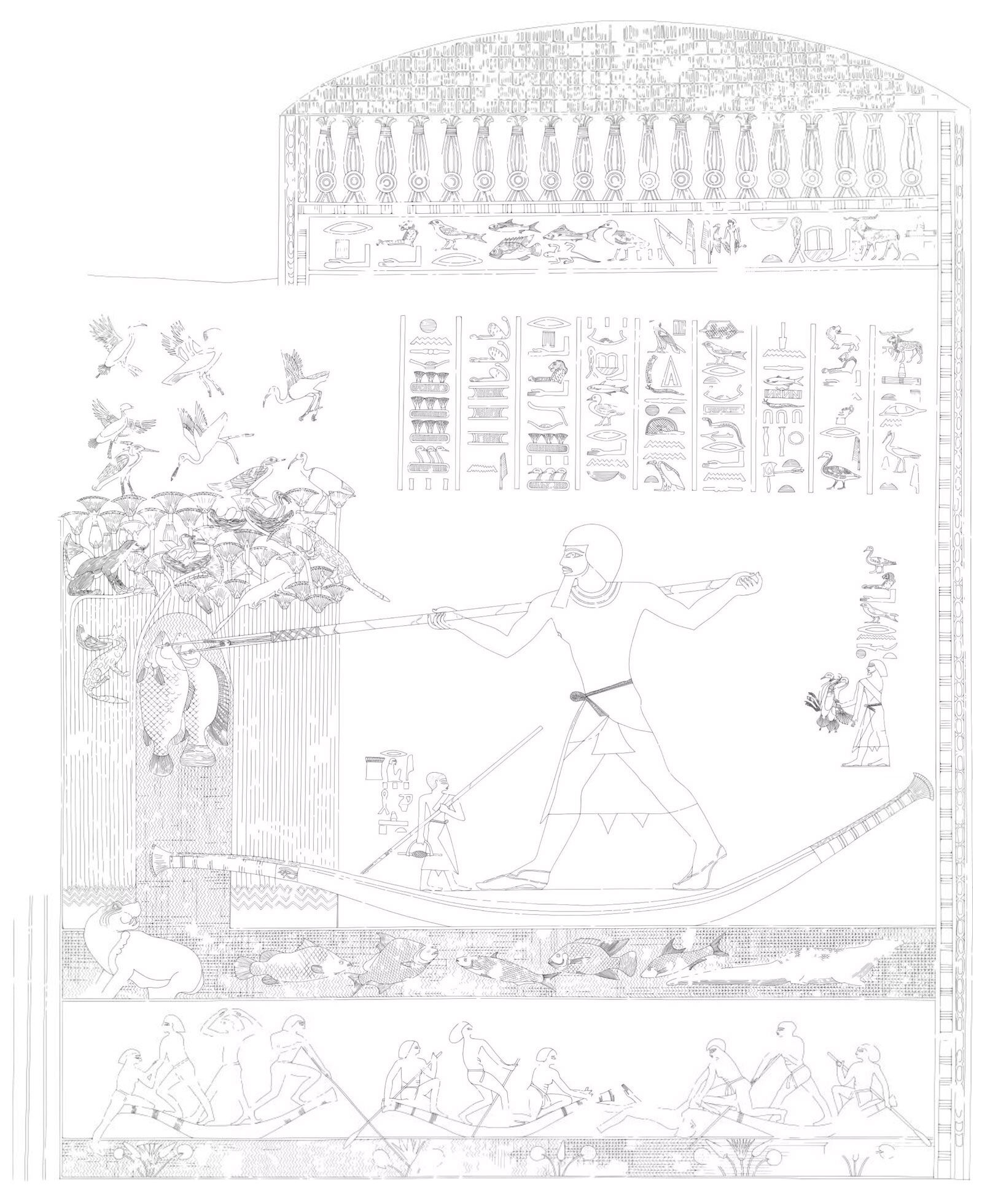 Tomb owner spear-fishing in the marshlands, a scene from the tomb of Khnumhotep II at Beni Hassan (Drawing by Kanawati and Evans, 2014) 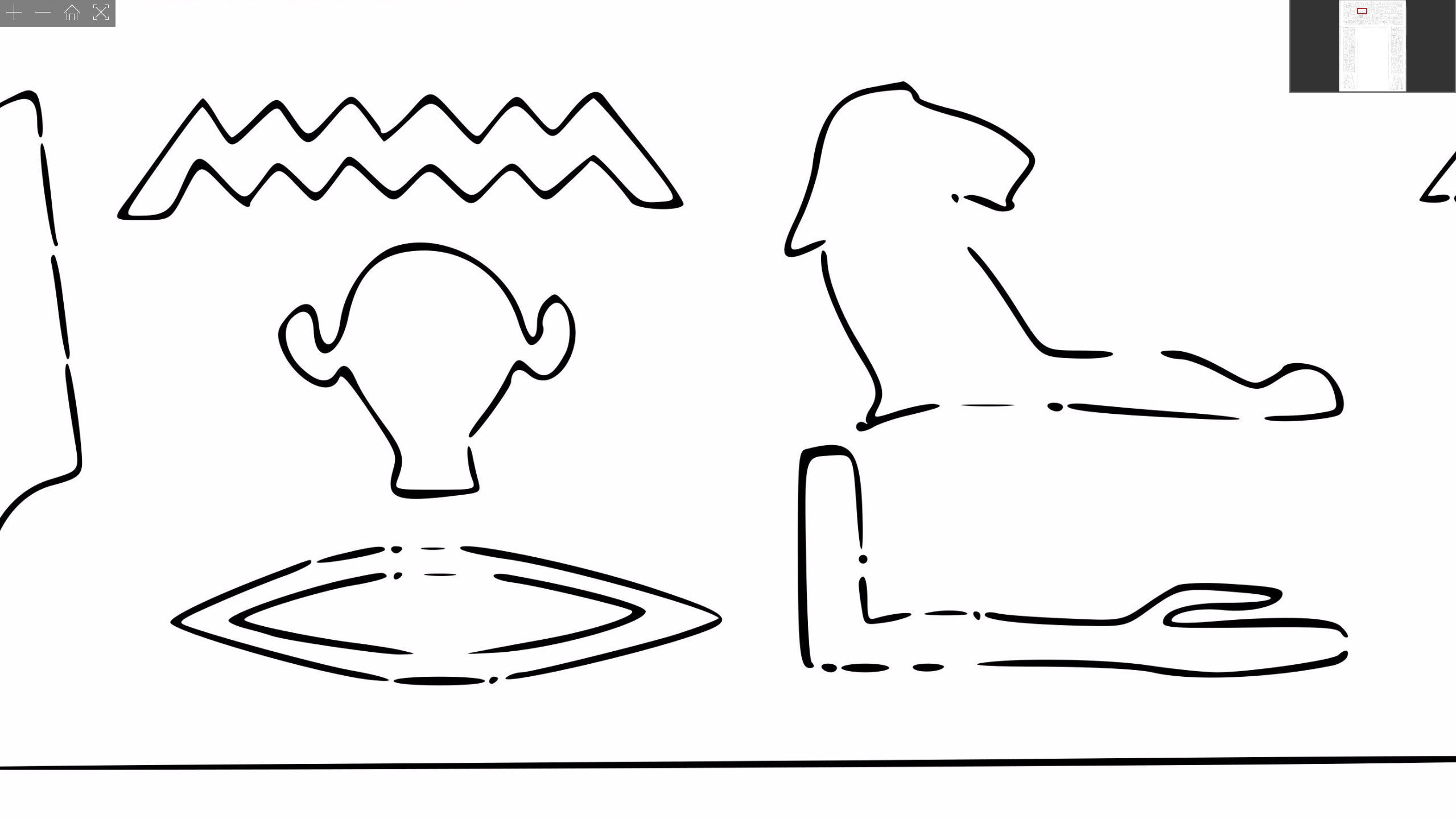 Entrance doorway to shrine, a scene from the tomb of Khnumhotep II at Beni Hassan (Detail - drawing by Kanawati and Evans, 2014)

For the original context of the above material, visit: Beni Hassan @ Macquarie, Developing a Visual Dictionary for Middle Kingdom Elite Tombs 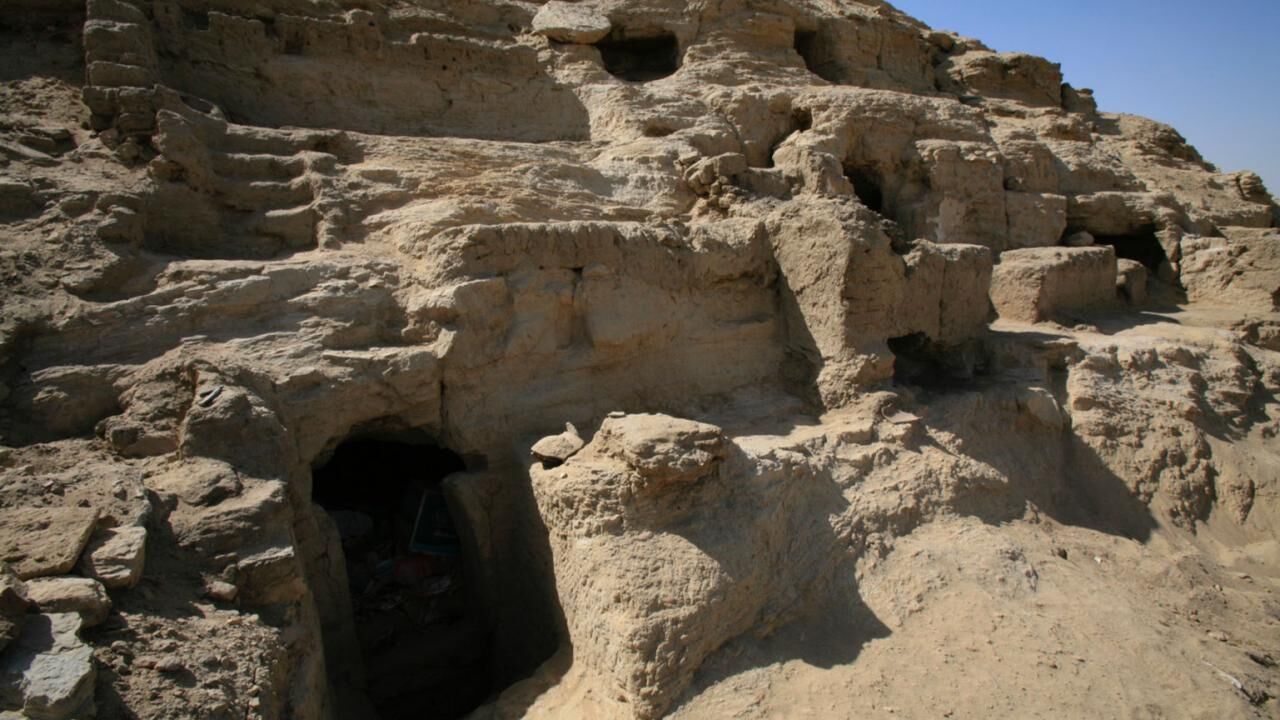 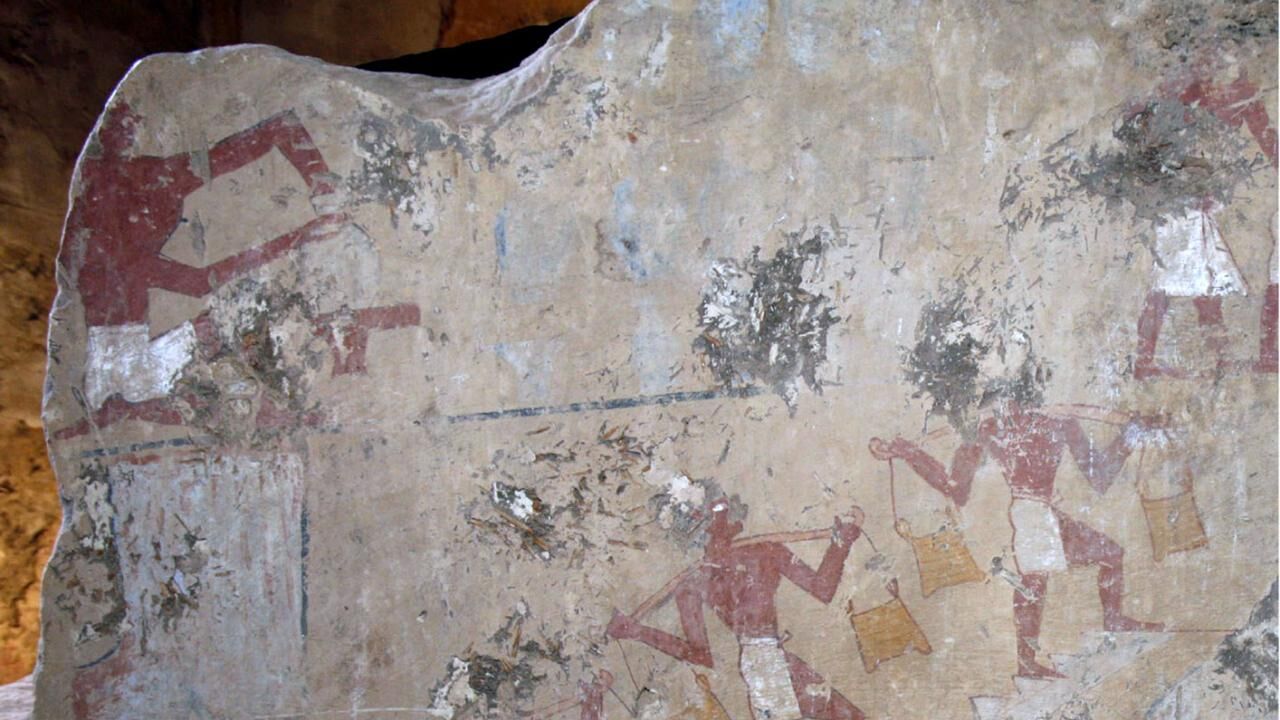