The Free University Berlin, in cooperation with the German Archaeological Institute Cairo (DAI), has been exploring the royal necropolis of Dahshur since 2000. In recent years, their joint efforts have been focusing on the Bent Pyramid, its valley temple, lower causeway and associated harbor, while addressing questions regarding the landscape archaeology of Dahshur and its region.

The Bent Pyramid at Dahshur (photo by Julia Schmied)

Dahshur’s extensive burial site is located 30 km south of Cairo on the west bank of the Nile. The area is dominated by the two pyramids of king Snofru (4th Dynasty, ca. 2600 BC), the so-called Red Pyramid and the Bent Pyramid. Cemeteries of high officials, settlements and valley temples surround the pyramids at the edge of the desert. In the Middle Kingdom (12th-13th Dynasty, ca. 1900-1700 BC) the site saw renewed activity as a royal burial ground for kings, their families and court officials.

The modern research history of Dahshur dates back to the 19th century, after the initial mapping of the site by the royal Prussian expedition directed by R. Lepsius in 1843. In 1894-1895, J. de Morgan carried out excavations on the pyramids and private tombs of the Middle Kingdom. Ahmed Fakhry explored the Bent Pyramid and its associated temples between 1951-55, and the American scholar Muses carried out excavations on the 13th dynasty pyramid of Imeny-Qemau and surrounding tombs of the Old Kingdom south of Dahshur in 1957.

“In 1975 the German Archaeological Institute Cairo gained the excavation concession for the site and explored the pyramid of Amenemhet III and its surroundings (1975-1980) as well as the Red Pyramid with its associated mastaba tombs and workshops (since 1981).

Since 1990 a mission of the Metropolitan Museum, New York, has been investigating the pyramid complex of Sesostris III, while a Japanese team of Waseda University, Tokio, has been excavating a necropolis of the Middle and New Kingdom in the extreme north of Dahshur since 1997.
From 2000 onwards the Free University Berlin, in cooperation with the DAI-Cairo, has been exploring the cemetery of the inhabitants of the pyramid city east of the Red Pyramid and a row cemetery of courtiers which is connected to the pyramid complex of Amenemhet II. Another focus of the DAI’s work is the localization of the pyramid towns and valley temples.”

Since 2008, the Free University Berlin and DAI-Cairo have been focusing on the Bent Pyramid, its valley temple, lower causeway and associated harbor.

“During the excavations above the mudbrick causeway, a path consisting of limestone fragments was discovered, which was created during the New Kingdom (around 1,200 BC) when the temple was demolished and a path needed for the removal of the stone blocks. Its paving stones mainly consist of architectural elements of the temple, amongst them also numerous decorated fragments which provide valuable information on the reconstruction of the temple’s original decoration. Since this is the oldest decorated temple of a pyramid complex, the importance of these fragments cannot be emphasized enough.”

The relief fragment 09-728 (seen below) “shows a fertility personification that presents a papyrus bundle and was part of a pillar of the temple of the Bent Pyramid. The relief was rediscovered during the 2011 work of the DAI-Cairo in a transportation sledgeway of the New Kingdom.”

“Several pottery sherds were recovered from between the blocks of this sledgeway. Fortunately the pottery showed unequivocal characteristics which allow to assign them to the New Kingdom period. Blue painted pottery is the most characteristic ceramic material from that period.”

“1,300 relic fragments stored in the Gizeh magazines (800 relief fragments more than published by Ahmed Fakhry) were all registered, if necessary restored and cleaned, as well as drawn, described and photographed.”

“We undertook a full documentation of all the relief fragments including a 1:1 drawing [on transparent plastic foil], a description with measurements, an identification of the relief depiction, description of colours etc. and a full photographic documentation.”

Valley temple of the Bent Pyramid at Dahshur as it is preserved today. ©GAI Cairo, D. Härtrich (left) and remains of the brick building north of the valley temple © GAI Cairo, J. Pinke (right) 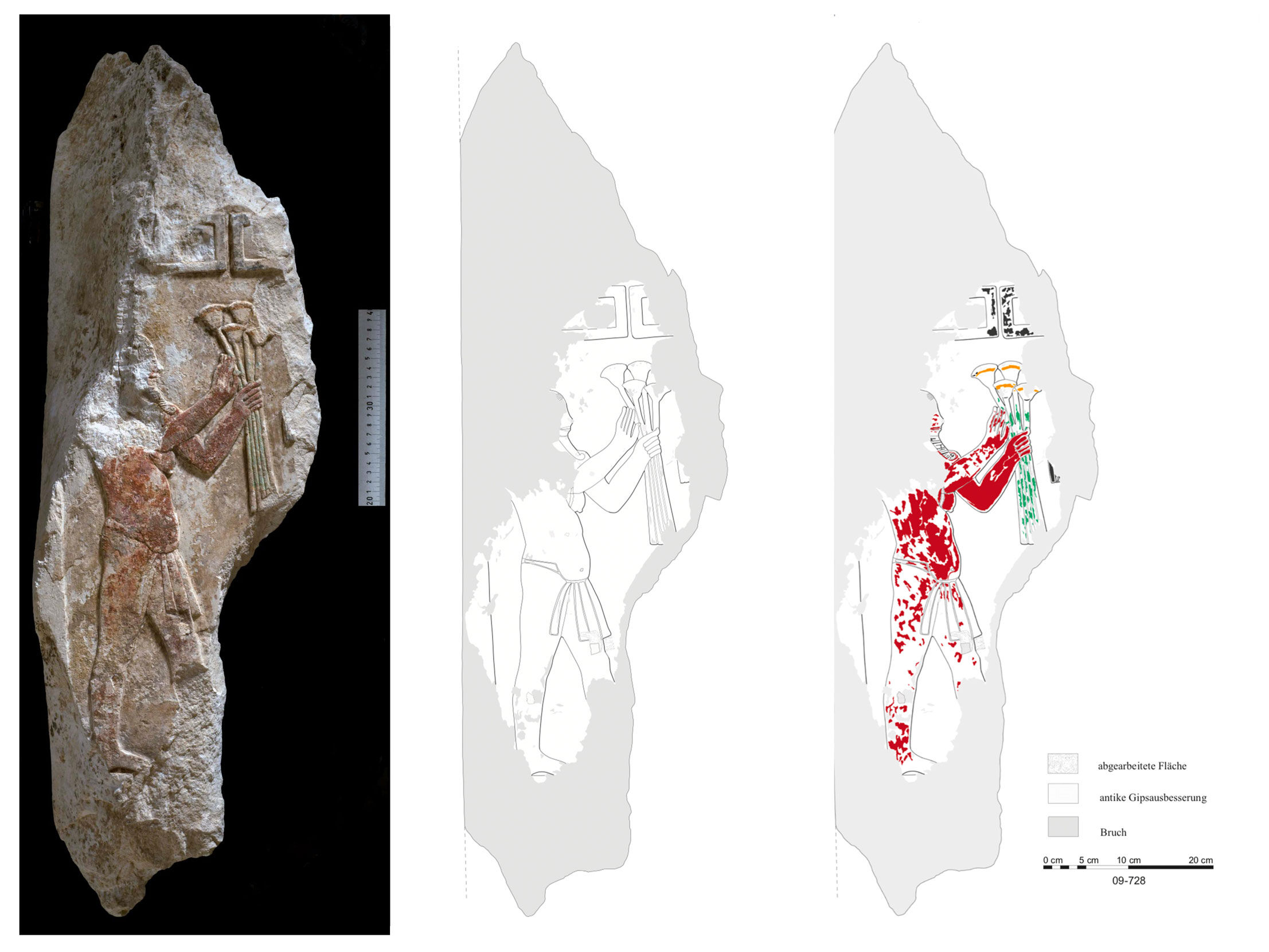 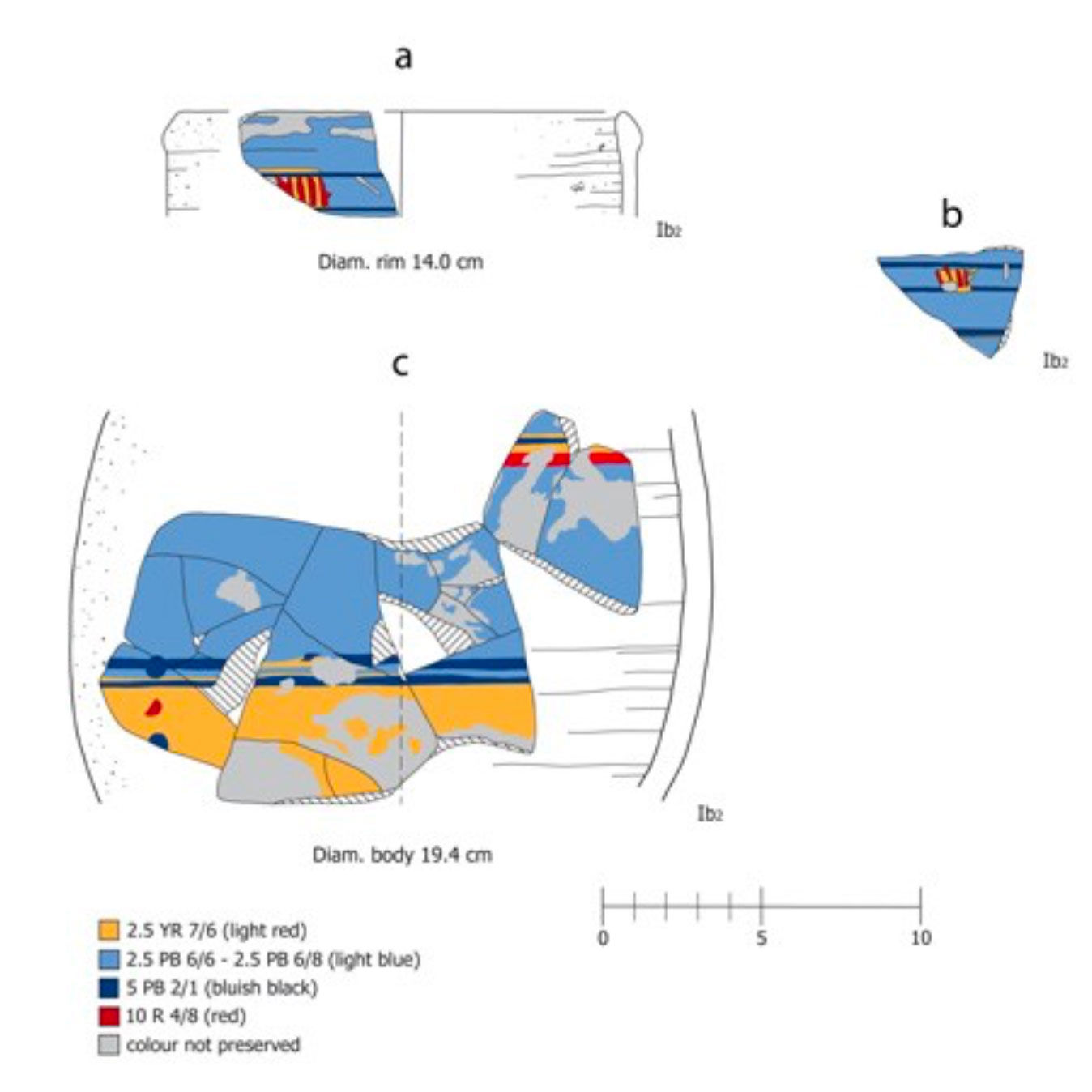 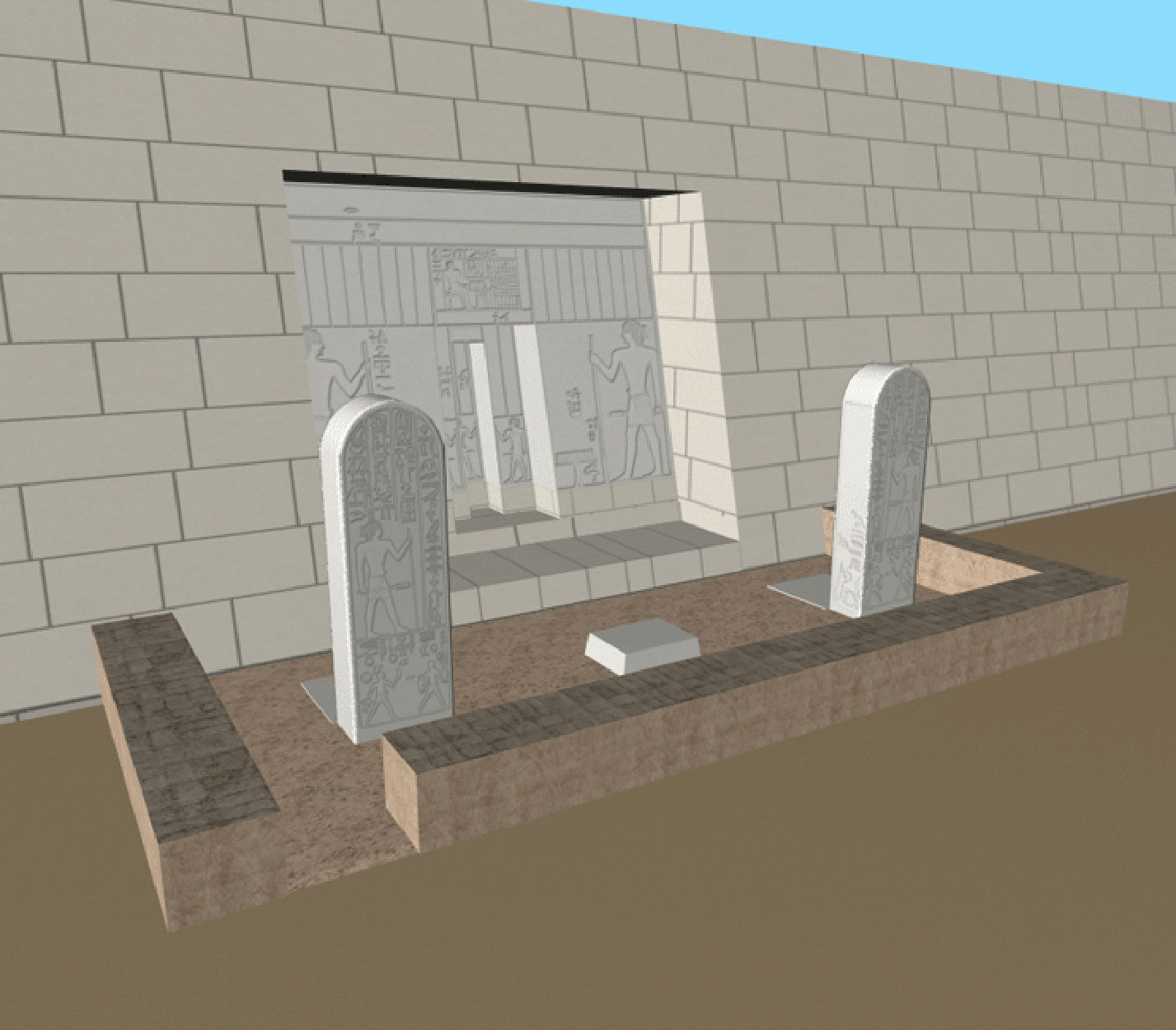 Nicole Alexanian, Sandra Müller – Report about the Work done by the German Archaeological Institute, Cairo in the so‐called Fakhry Magazine and in the Museum Magazine at Giza, Pyramids in Spring 2013, Autumn 2013 and Spring 2014. (Available for download here.)

For more information about the DAI expeditions at Dahshur, visit the institute’s website. The most recent season reports can be downloaded from here. 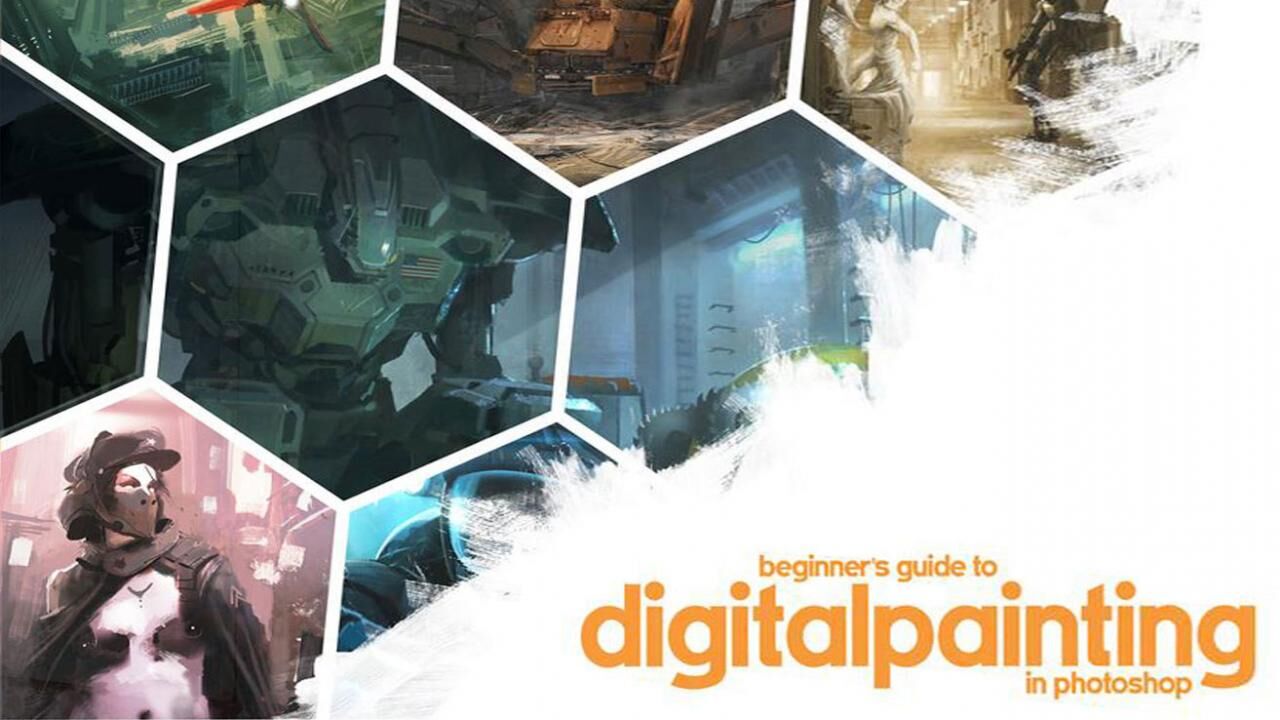 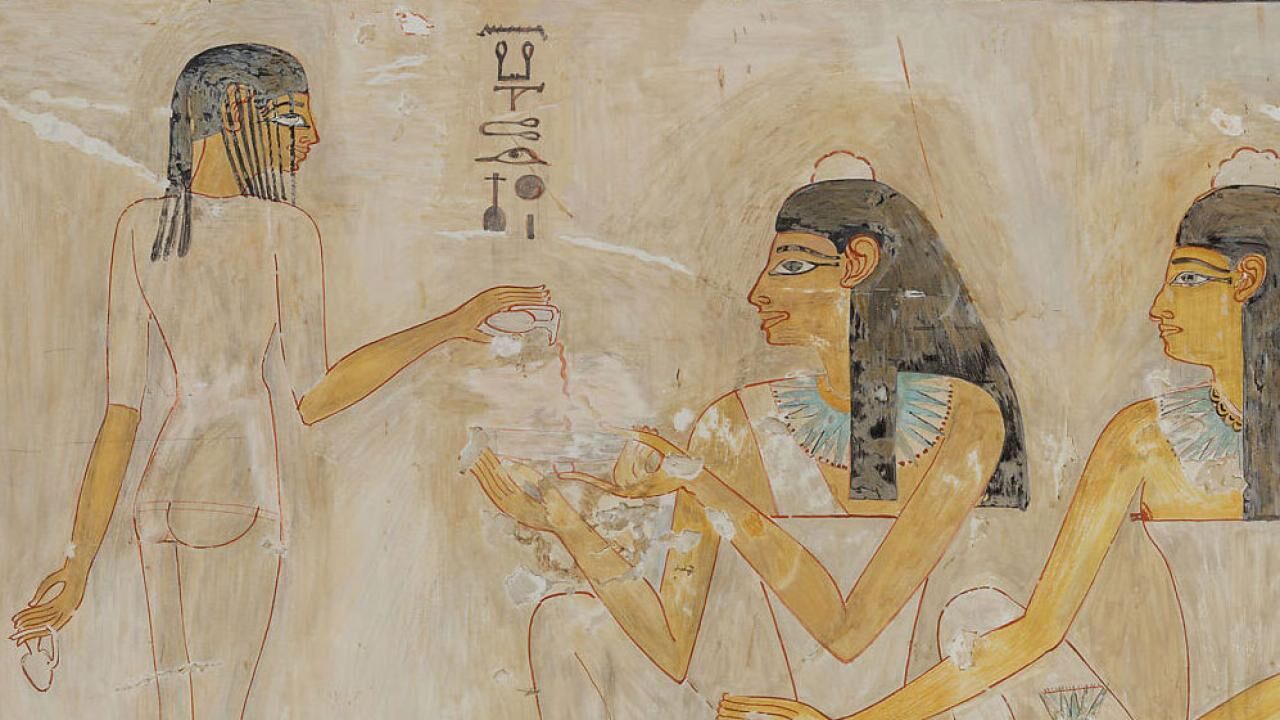