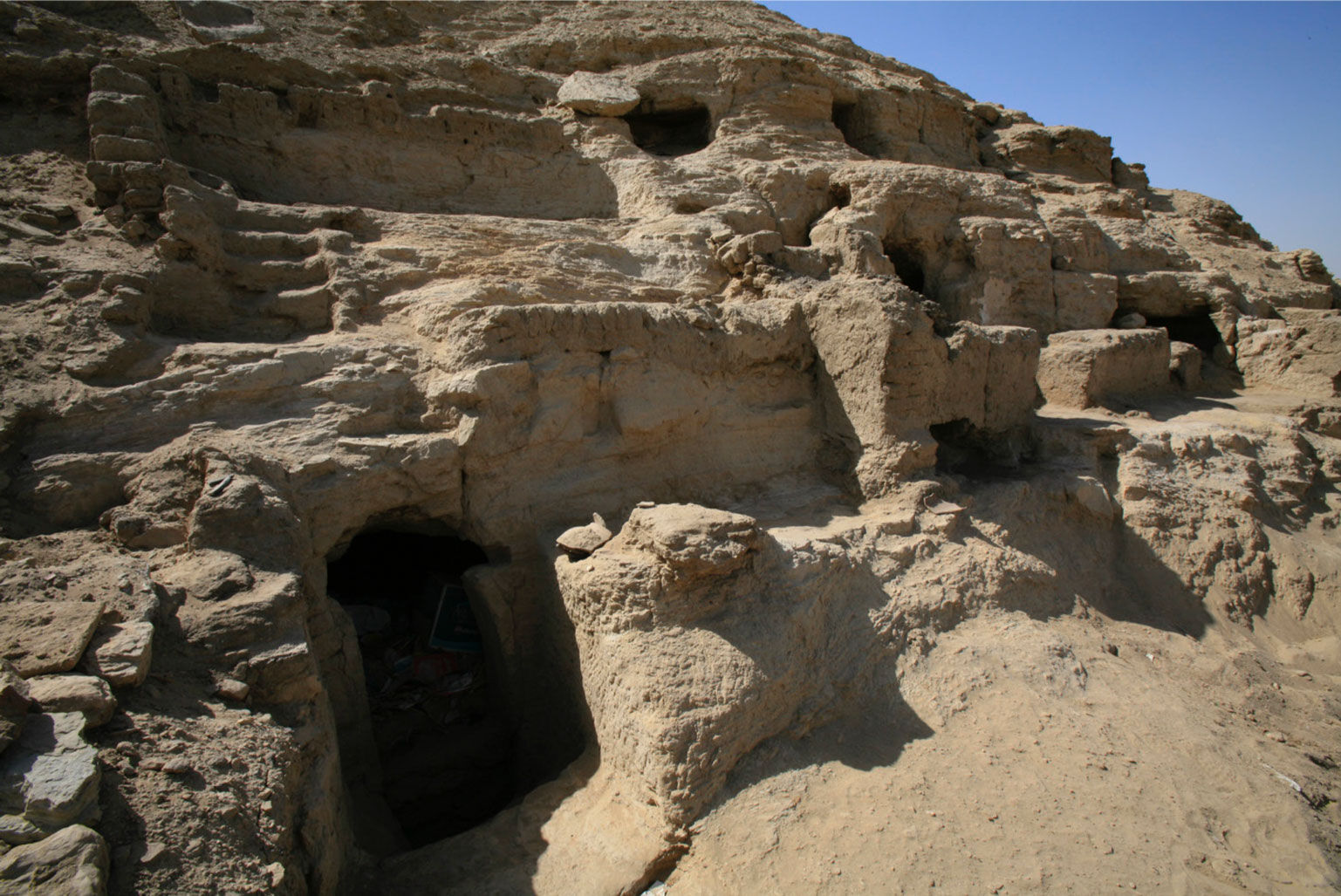 In 2007, a British Museum expedition began investigating the late antique activity at Hagr Edfu, with a focus on surveying, conserving, and documenting the rock-cut tombs of Areas 1 and 2, including Tomb D of Area 2b. Based on pottery, inscriptions and ostraca, this phase of use at the necropolis can be dated to the 5th–9th century AD.

“Area 2b, Tomb D provides a welcome case study because the rock is relatively stable and the interior whitewashed and decorated. The architecture of the original tomb consists of two large rooms, the second of which has two small chambers extending from its west and south walls. The entrance to the tomb is fitted with emplacements for a lintel, door sockets and a plastered mud brick step. A round hole in the façade (max. diam. 25cm) functions as a window, admitting a low, diffuse light. Removal of wind-blown sand from the first chamber of Tomb D confirmed that the rock-cut tomb had been ‘cleared’ by earlier excavators. Nevertheless, several layers of floor plaster evidence multiple phases of use consistent with habitation. Future analysis of pottery embedded in the floor layers may suggest dates of occupation.

On the walls of the first room of Area 2b, Tomb D, a programme of dipinti consists of six crosses and two framed Coptic texts. Painted on a white earth ground, the texts and all but one of the crosses are painted in combinations of red and yellow ochre. The two texts are located in the centre of the north and south walls, respectively (Figs 17 and 18). Today, both texts are largely destroyed by a natural fissure running north-south through the first room of the tomb. Nevertheless, pnoute (‘God’) can be read in the first line of the text on the south wall. The texts are framed by guilloche borders, painted using the same technique documented on various media at Western Thebes, and common in 10th and 11th century AD manuscript illumination at Hagr Edfu. Each framed Coptic text is flanked by two crosses. On the east wall of the first room, two additional crosses are painted at the centre and south end, while a doorway, leading to the tomb’s second chamber and framed by a red painted motif, is cut through the north end of the wall. The majority of the crosses have elaborate, vegetal designs criss-crossing and encircling them (Fig. 19). The exception is a cross located at the west end of the north wall; painted in black, it consists of a knotted design (Fig. 20). Incised in the plaster at the east end of the south wall and below a red and yellow cross is a rough Coptic graffito reading anok Stephanos (‘I am Stephan’) (Fig. 21). In the second rock-cut chamber of the tomb, a red and yellow ochre cross is painted directly on the stone wall over the entrance of a large niche in the west wall (Fig. 22).

In Area 1, located to the north along the desert escarpment at the limit of Late Antique activity… In the second tomb from the left, on the original prepared and white-washed surface are two extant phases of decoration (Fig. 24). The original configuration of the tomb is difficult to reconstruct due to the collapse of the ceiling in the first chamber and the instability of the rock precludes excavation. At the left-hand side of the surface, the painter took advantage of the beveled edge of what once may have been the upper part of a stela carved in relief. A depiction of a jewel-encrusted cross occupies the centre of the demarcated area and a vegetal motif extends up its two sides. Above the apparent stela the painted Coptic text reads, ‘The Lord, Jesus,’ and in the upper left and right quadrants formed by the arms of the cross, ‘Jesus,’ and ‘Christ, Tamina,’ respectively are painted. The stone at the centre is badly fractured and the surface is abraded. Nevertheless, patches of extant painting indicate that the vegetal design continues, framing an inscription (± 6 lines) of which there are now only traces of letters. At the bottom edge is written ‘Dios, the sinner’ in a confident script. A Dios, perhaps ‘Apa Dios,’ appears in an inscription in the rock shelter on the hill-top. A thick layer of mud plaster covers the right hand side, probably concealing additional painting belonging to the first phase of decoration. The thick mud plaster is covered with a fragmentary thin yellow plaster painted with red-orange designs in thick brush strokes.”

“In 2009, seven Coptic rock-inscriptions were systematically copied. Six are located on the west side of the shelter and a single inscription is written on a narrow ledge facing south. The texts consist of nomina sacra and personal names, including Apa Dios” (Fig. 34).

Not specified by authors. 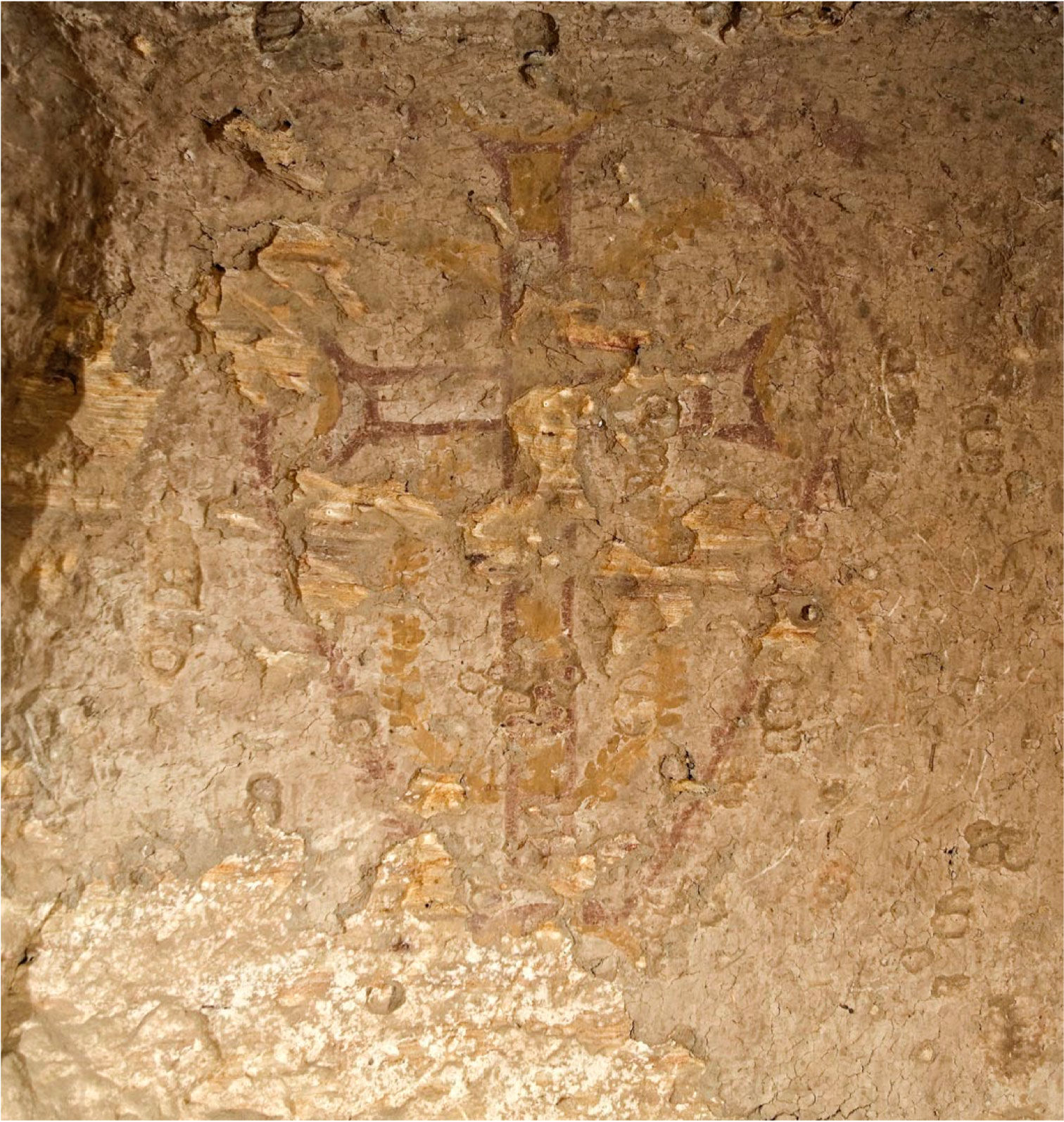 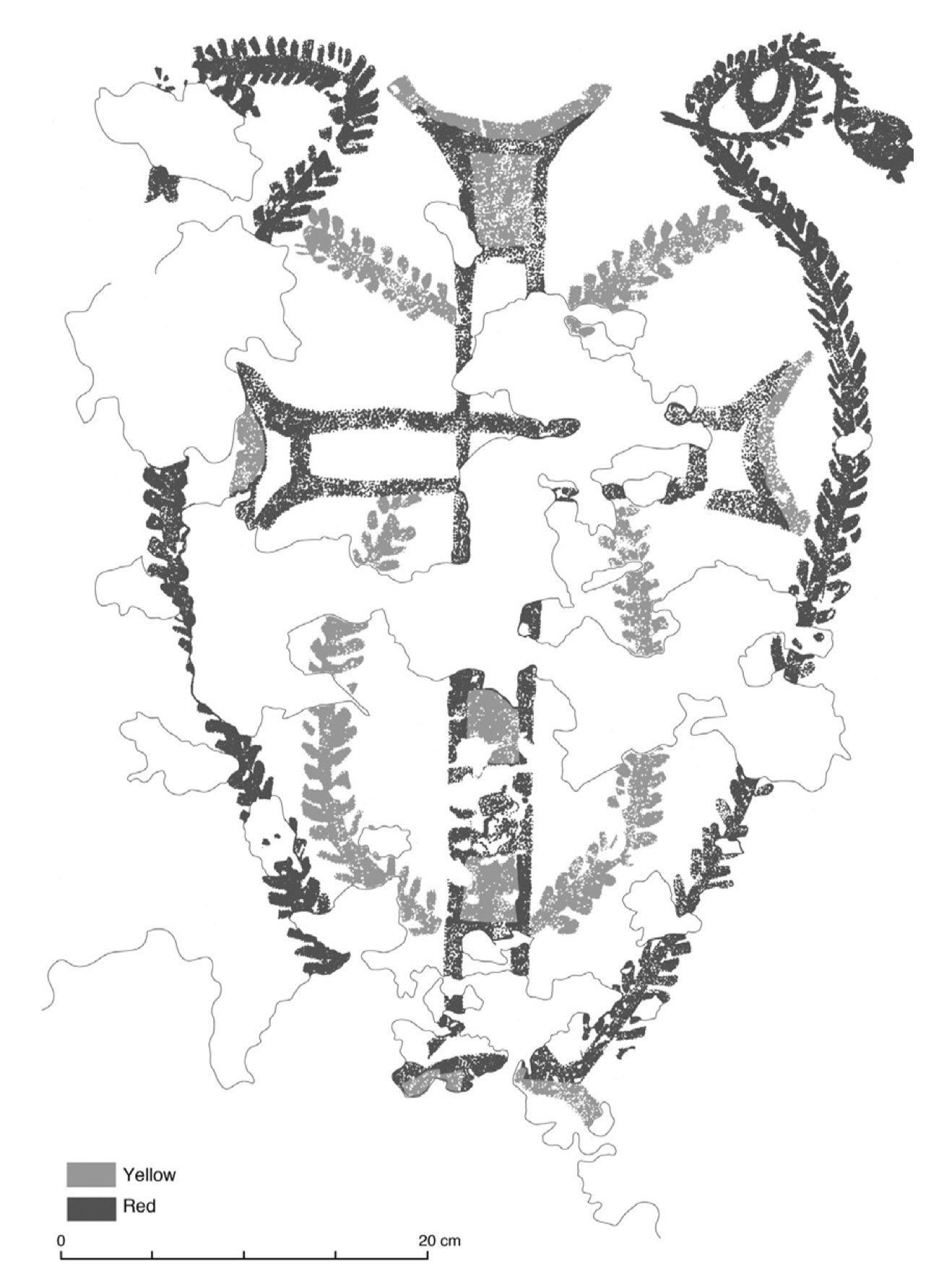 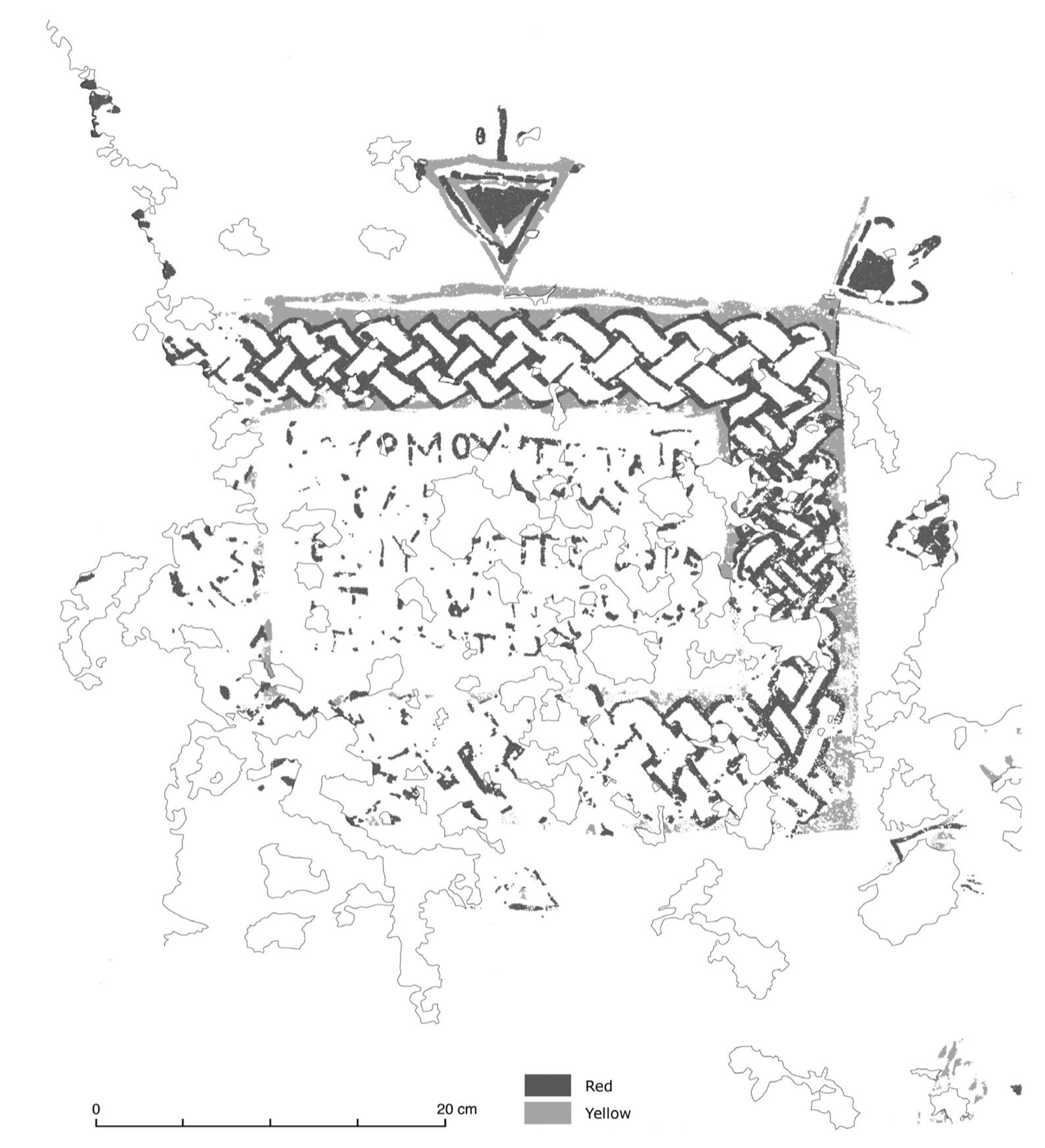 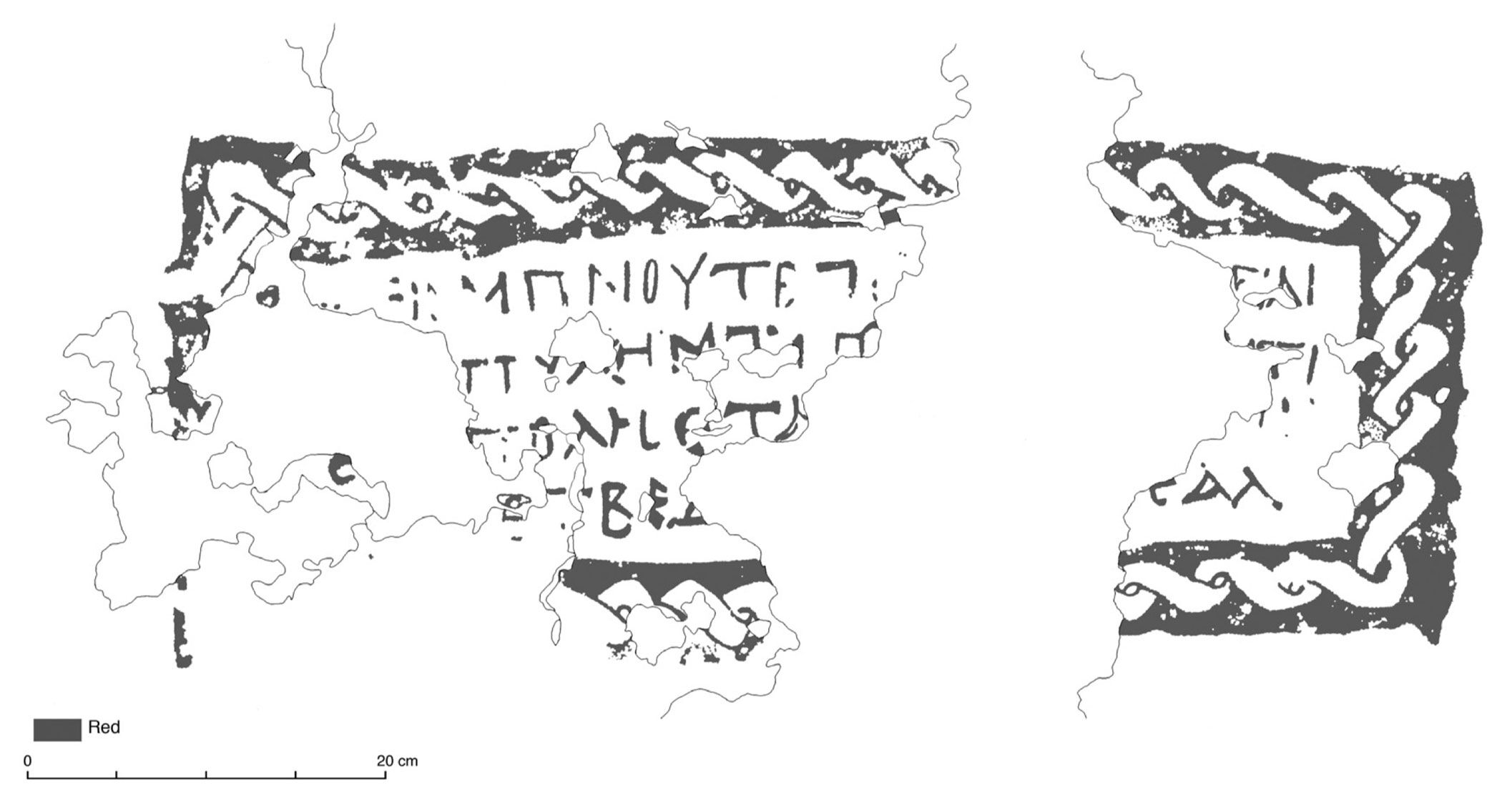 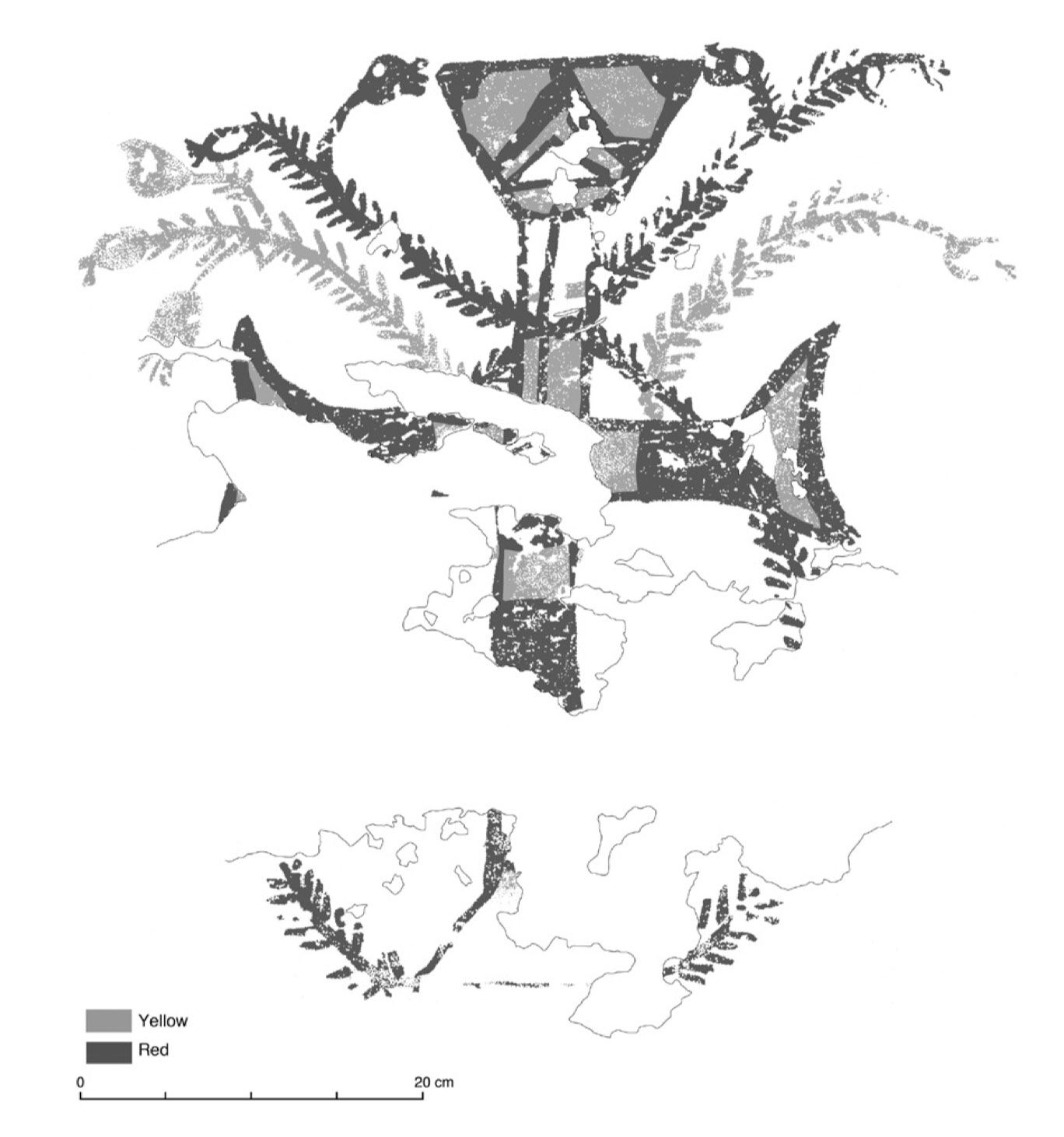 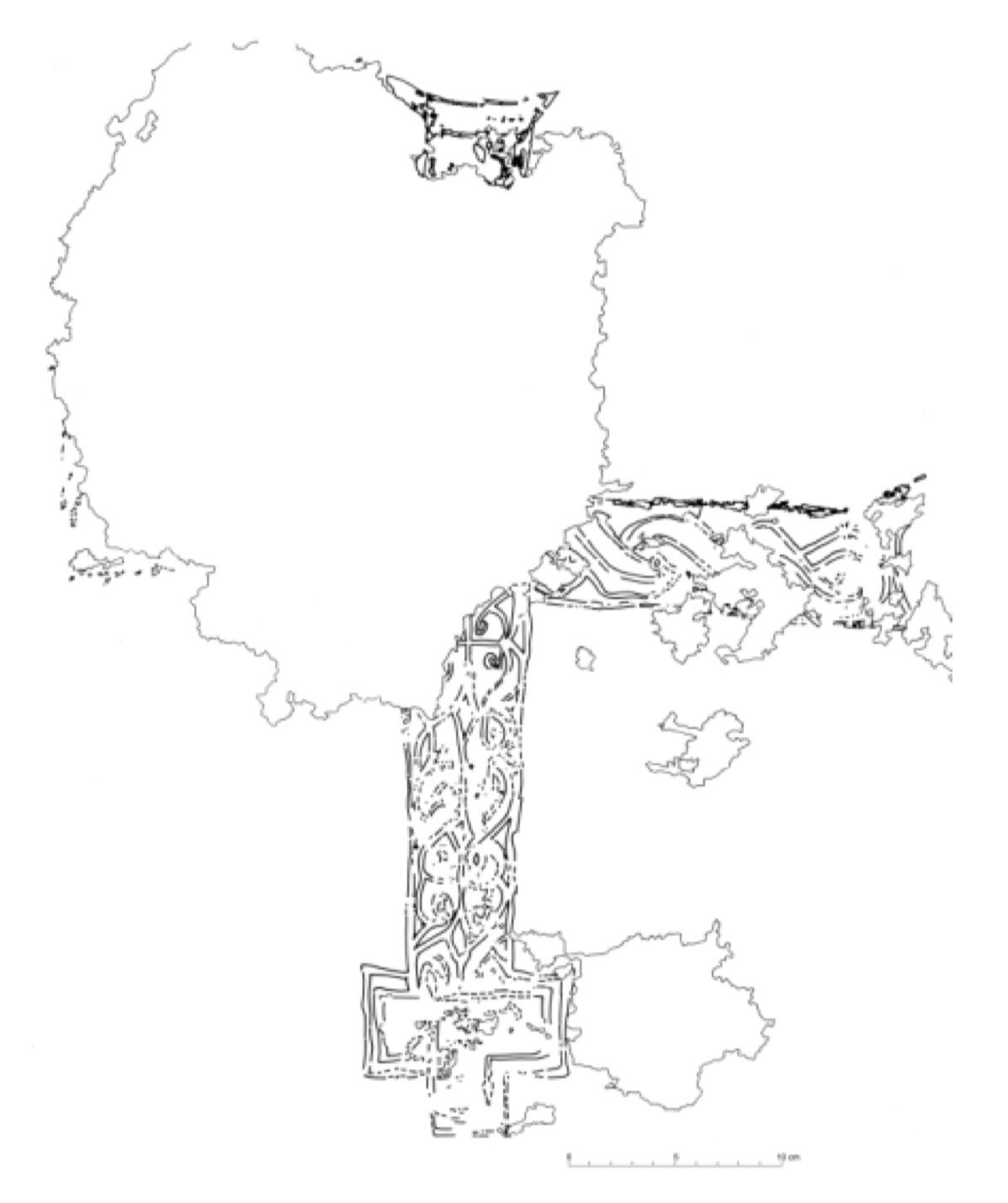 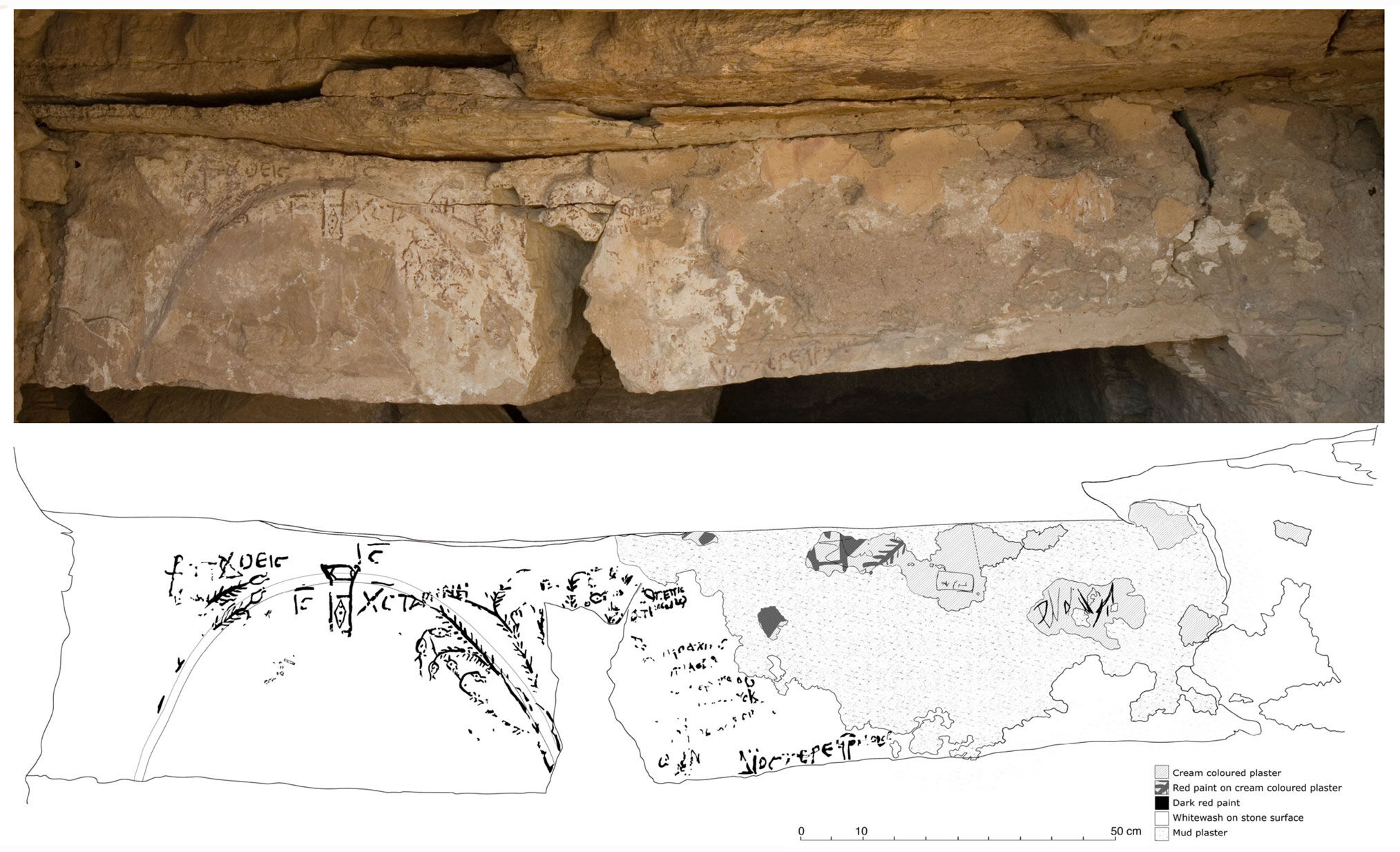 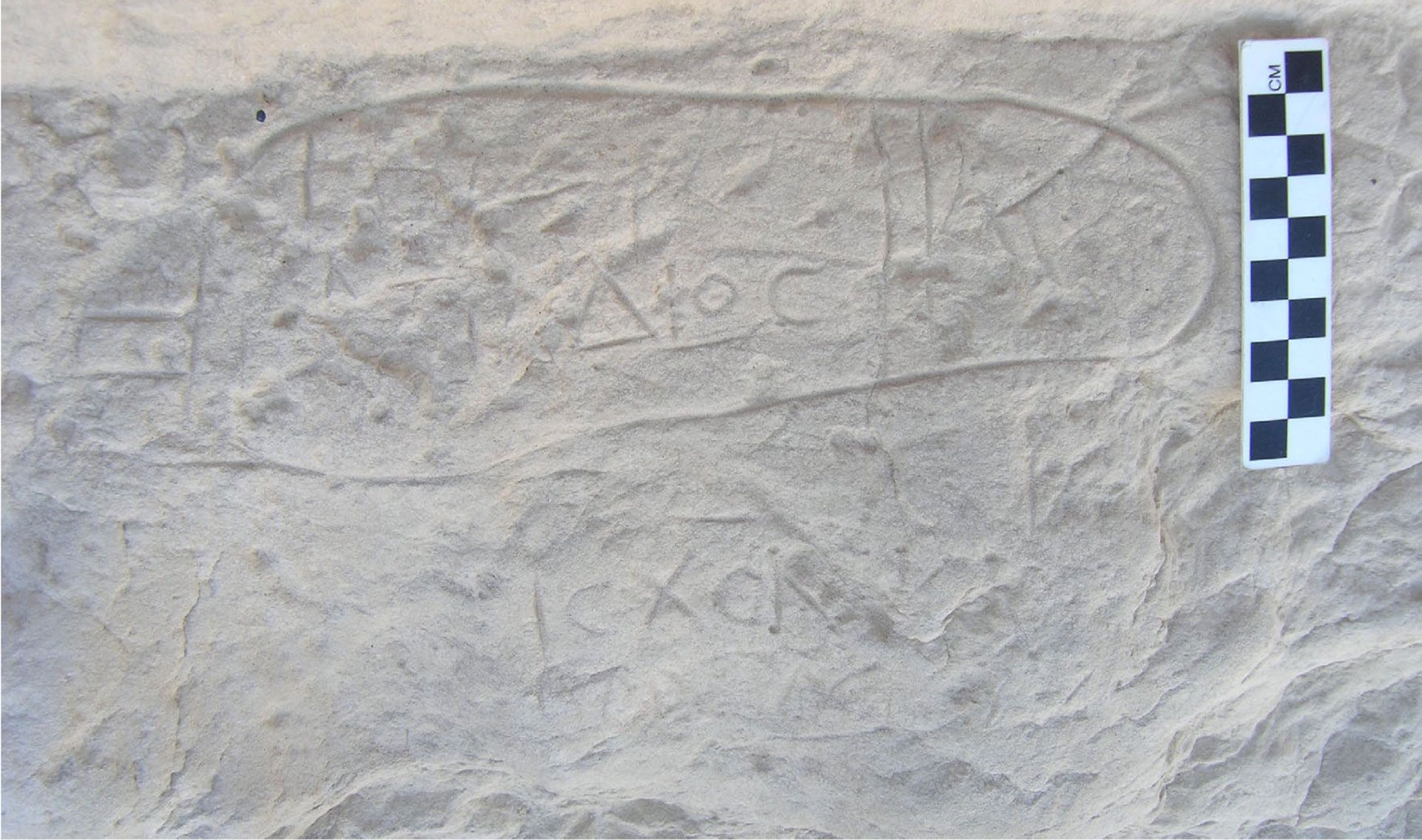 Hagr Edfu. Rock-inscriptions including the name Dios and a nomen sacrum. 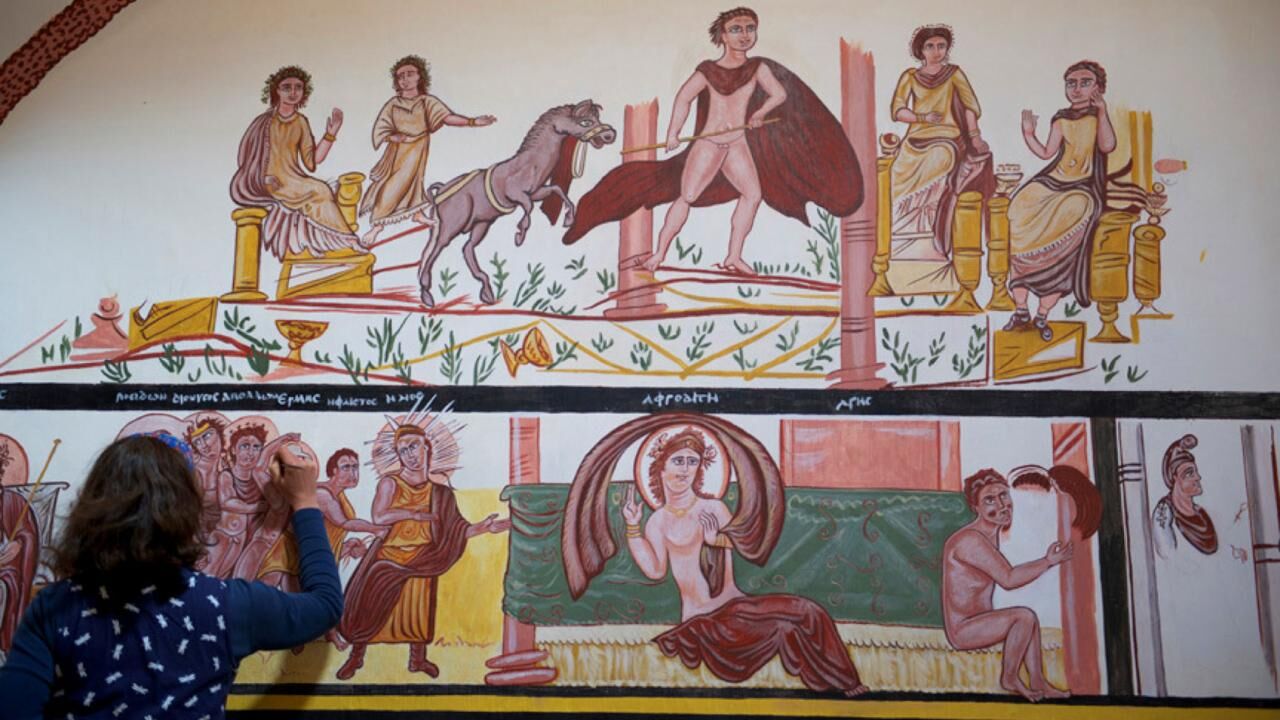 In 1979, a team of the Dakhleh Oasis Project discovered the upper part of lavishly decorated walls of what turned out to be a fourth century ‘villa’ occupied by a family of high social status. 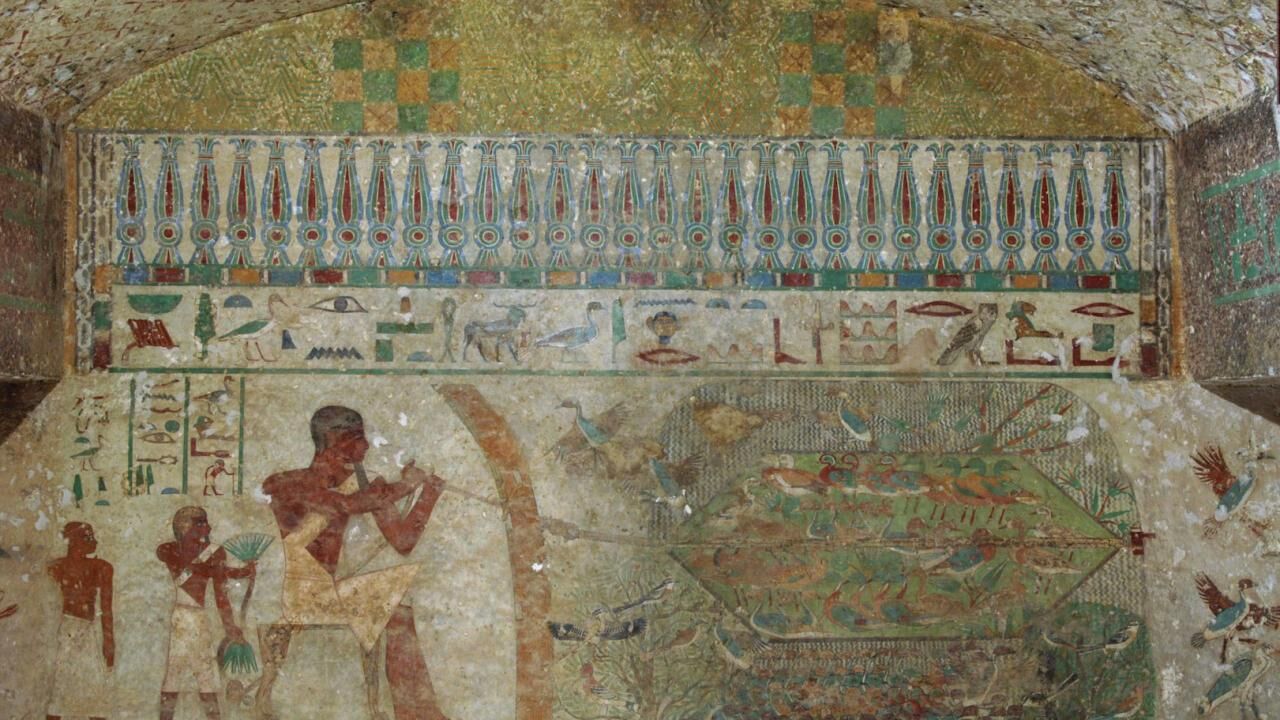