In 2006, Dr. Ray Johnson, the director of the Epigraphic Survey (Chicago House) in Luxor, contributed to the Amenmesse Project/KV 10⎼KV 63 by lending me and my artistic skills to draw the coffins found by Dr. Otto Schaden † and his team in Luxor’s Valley of the Kings. At the end of their 2005 season, while clearing the undisturbed crude foundation flooring of the workmen’s huts near the tomb of King Amenmesse/KV 10, Dr. Schaden’s team had found a corner carved into the bedrock. The mission returned the next season to properly excavate and discovered a single chambered shaft tomb, now identified as KV 63, containing eight coffins; two were gilt coffinettes and six were wooden, four of which were badly damaged by termites. There were also 28 large ceramic storage jars, many of which were sealed. The coffins and jars were filled with ceramics, textiles, natron, and a variety of other materials. No mummies were interred since the tomb had been used as an embalmer’s cache, but the question of whose embalming goods were housed here remains to be answered.

KV 63, the first new tomb in the Valley of the Kings since Howard Carter found the tomb of Tutankhamun/KV 62 in 1922, bore no sign of a royal name, but some seal impressions found there show similarity to finds from nearby tombs and the ceramics also exhibit many similarities to wares from Tutankhamun’s embalming cache in KV 54. From the art styles and comparisons of a variety of artifacts, there was no doubt that the date for the final closing of KV 63 in antiquity fell during or within a few years of the time of King Tutankhamun. 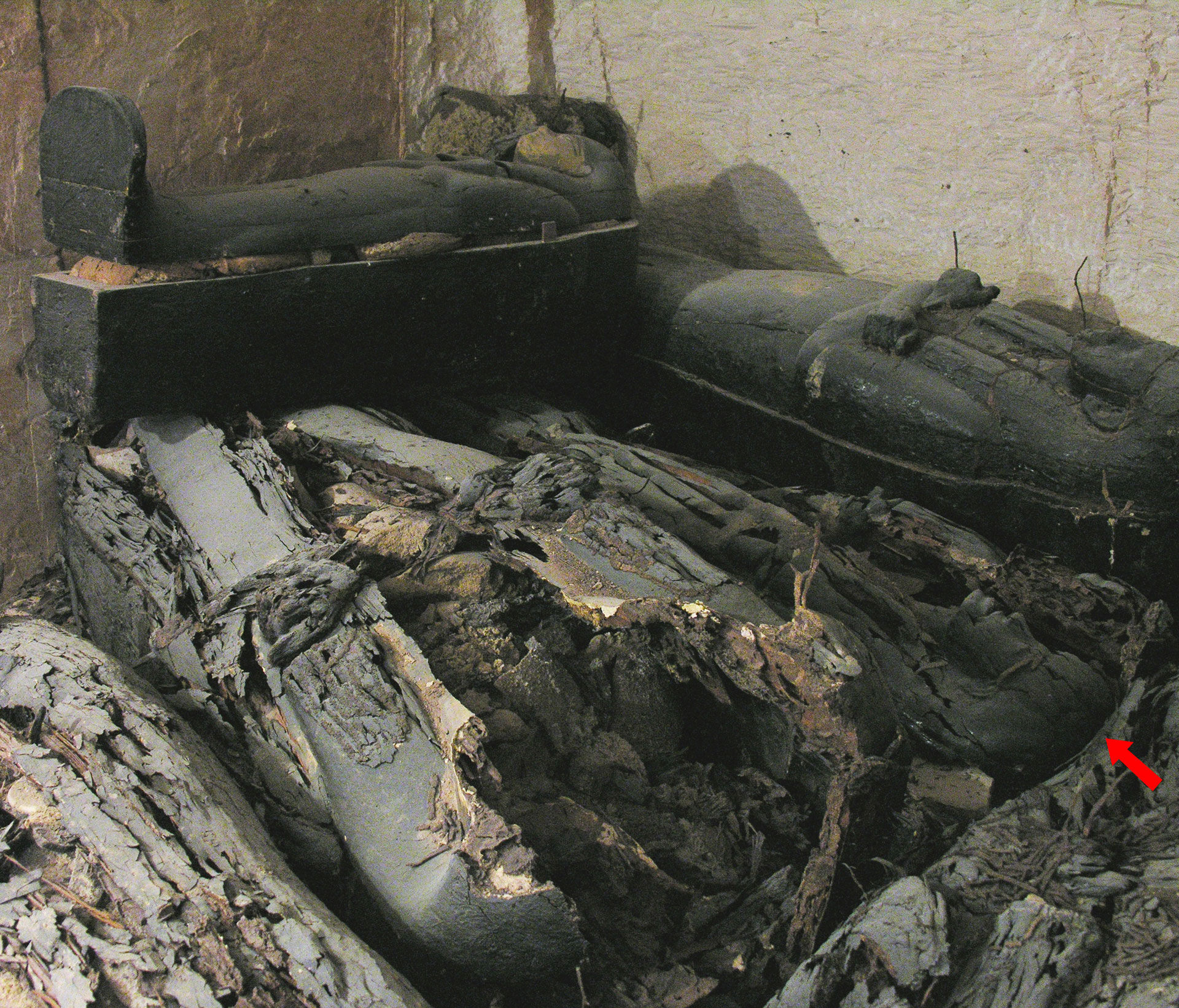 An initial view of KV 63 upon discovery of the tomb in 2006 – Coffin C is the second prone coffin from the right.

I began my workdays by descending the steep ladder down the shaft, ducking through the low entrance, and finding a place to situate myself inside the small, crowded chamber. My goal was to draw each of the coffins as accurately and completely as time and the environment of the chamber would allow. Something different was happening each day ⎼ the photographer was shooting and needed a bit of space or assistance, a TV crew was filming, reporters and dignitaries were visiting, conservators were consolidating the damaged coffins, and Egyptologists were excavating, opening, and recording the contents of one coffin at a time. Everything had to be documented and moved up to safer storage in the adjacent Amenmesse/KV 10 by the end of the season, as the tomb was in danger of flash flooding should a rare downpour occur. 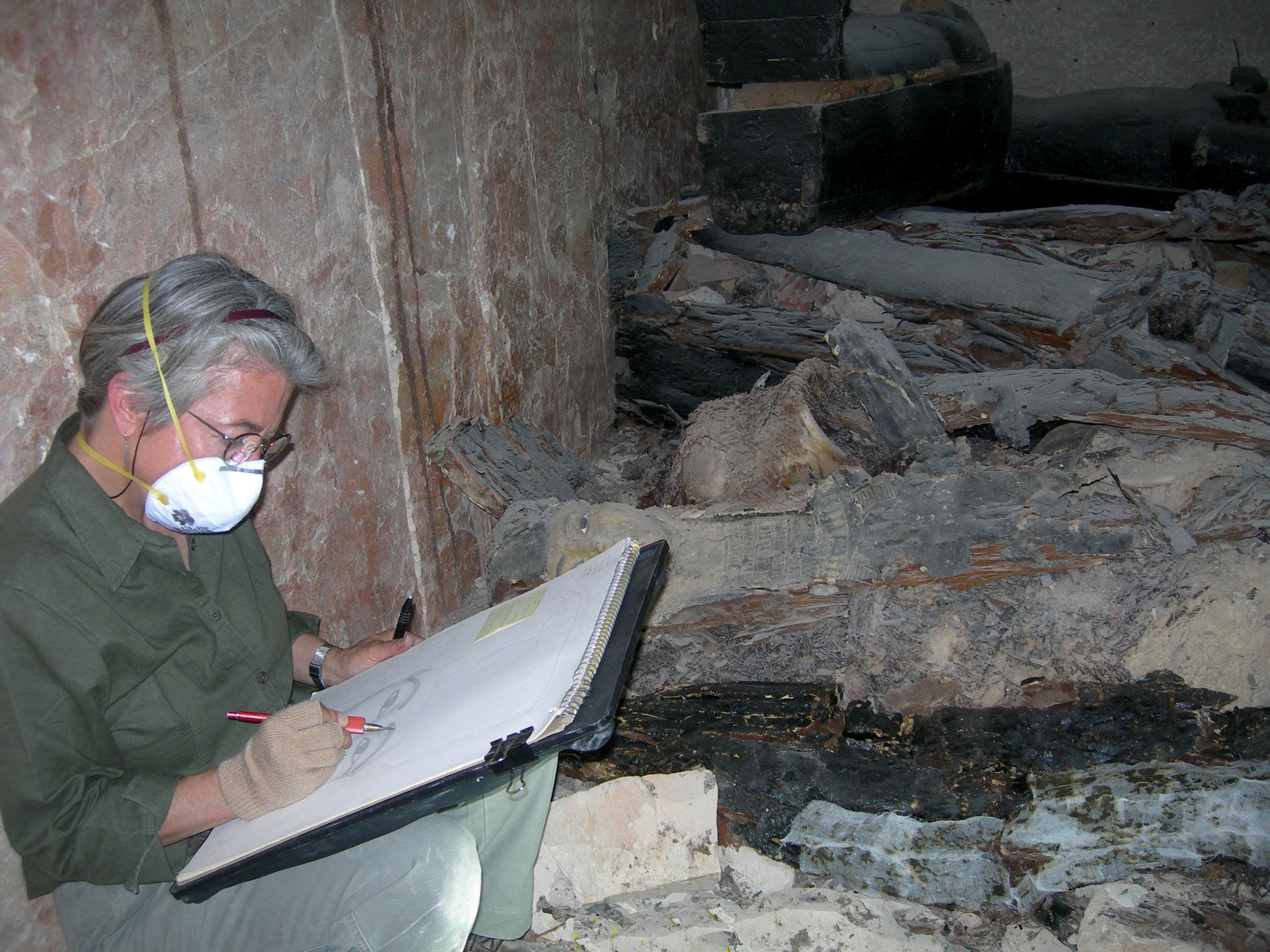 Susan Osgood drawing in KV 63 as conservators began consolidating the frontmost Coffin A shortly after the discovery in 2006.

That first season I drew the four most damaged coffins in situ before they were excavated and conserved. In 2009 and 2010 I did post conservation drawings of those coffins and also drew the three best-preserved, difficult to reach coffins after they had been moved up to Amenmesse/KV 10. Still yet to be drawn is a small, gold gilt, well preserved child’s coffinette that was found amongst down-filled pillows tucked inside Coffin G, which rested across the lower section of Coffin C.

My drawing method was to begin with an in situ full frontal drawing at 1:7 scale on A3 sized graph paper. Extensive termite damage made the coffins so extremely fragile that they could not be touched, and their close proximity to one another meant that they were visible from only one or two angles. Using pencil, a proportional tool, triangles, calipers, and two folding wooden rulers to triangulate, I took as many measurements as possible from all different angles and utilized digital photos for reference. Next came detailed frontal drawings of the torsos, also drawn in situ, profiles of the faces were drawn at a larger scale on fine white drawing paper, and lastly hypothetical reconstructions of the whole coffins were drawn in frontal and profile views at 1:7 scale on graph paper. As time allowed, other details and views were drawn.

Coffin C, the most damaged, was drawn in situ quickly at the end of the first season from an upside-down and somewhat distant vantage point. Surrounded by three other coffins, with a fourth laying across its legs, the paper-thin wood had been decimated by termites, its foot lay broken against the wall, and its mouth gaped open like something out of a mummy horror film. 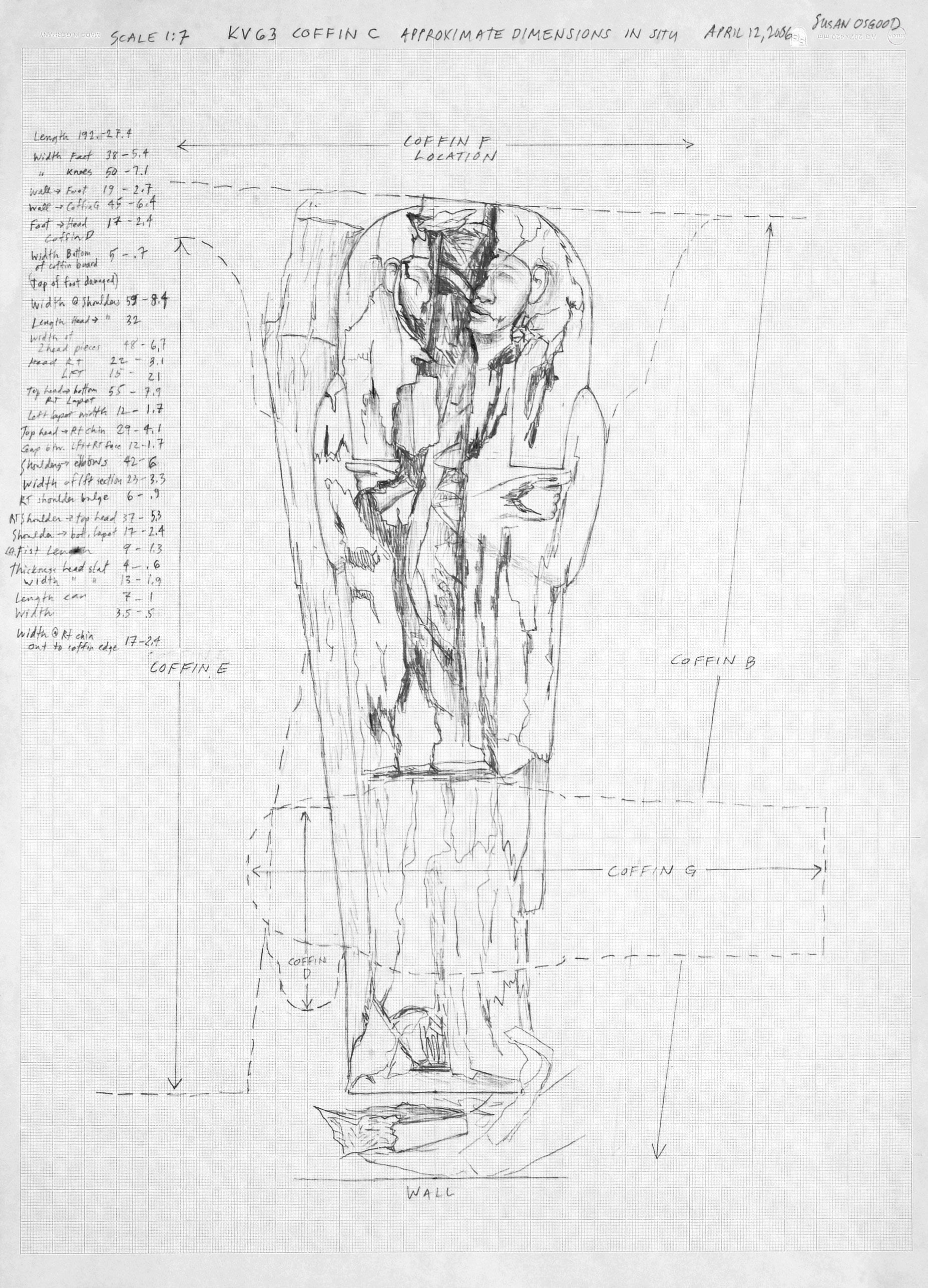 After finishing the in situ Coffin C drawing, the damaged coffin was moved up to the tomb of King Amenmesse/KV 10 for conservation. In the 2010 season, I worked on post conservation documentation ⎼ carefully observing, measuring, and drawing the modeled facial features, noting all of the breaks and conservation patches, and attempting to reassemble the fragments into a whole. 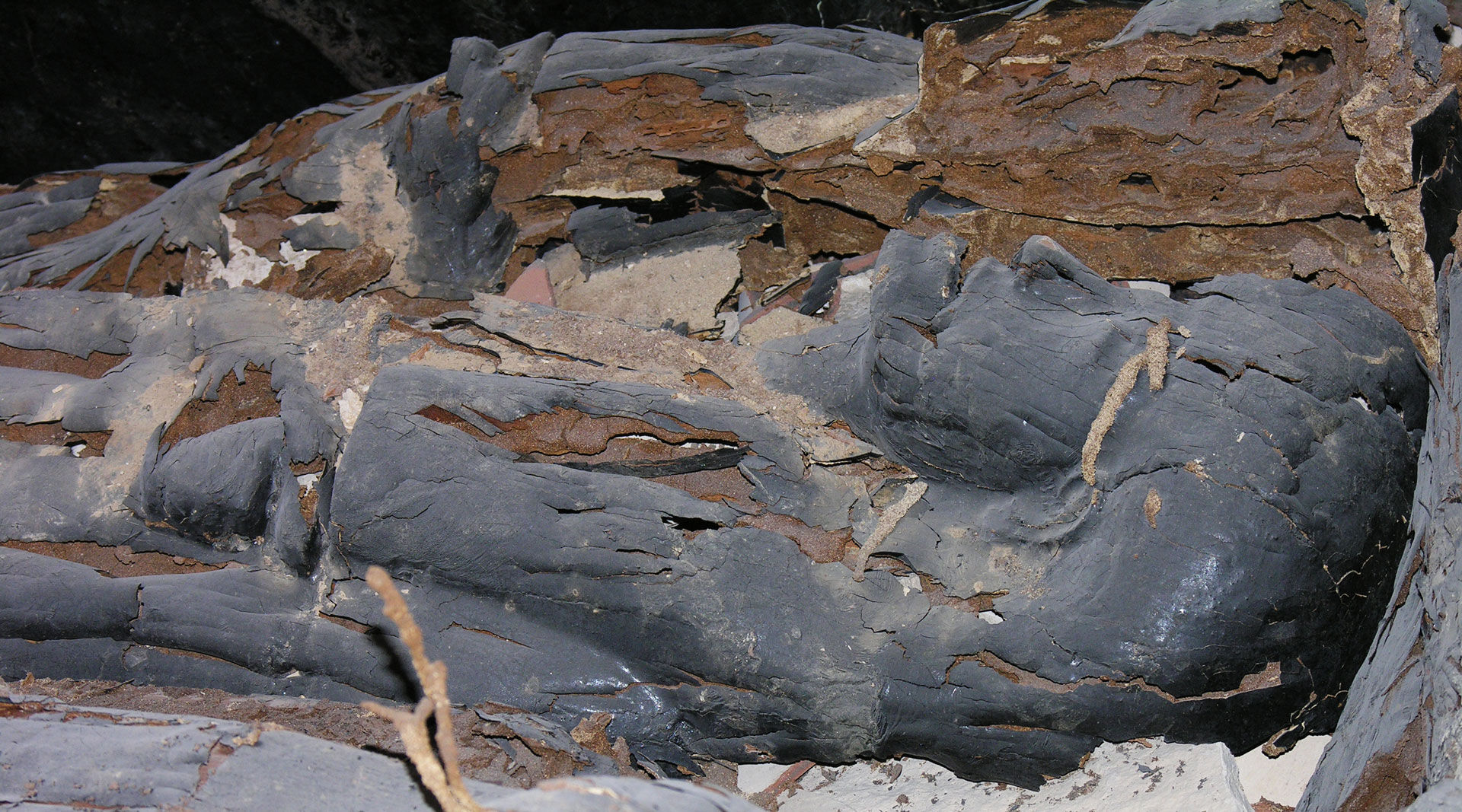 A detail of KV 63 Coffin C upon discovery in situ in the tomb chamber, showing the extreme extent of the termite damage. 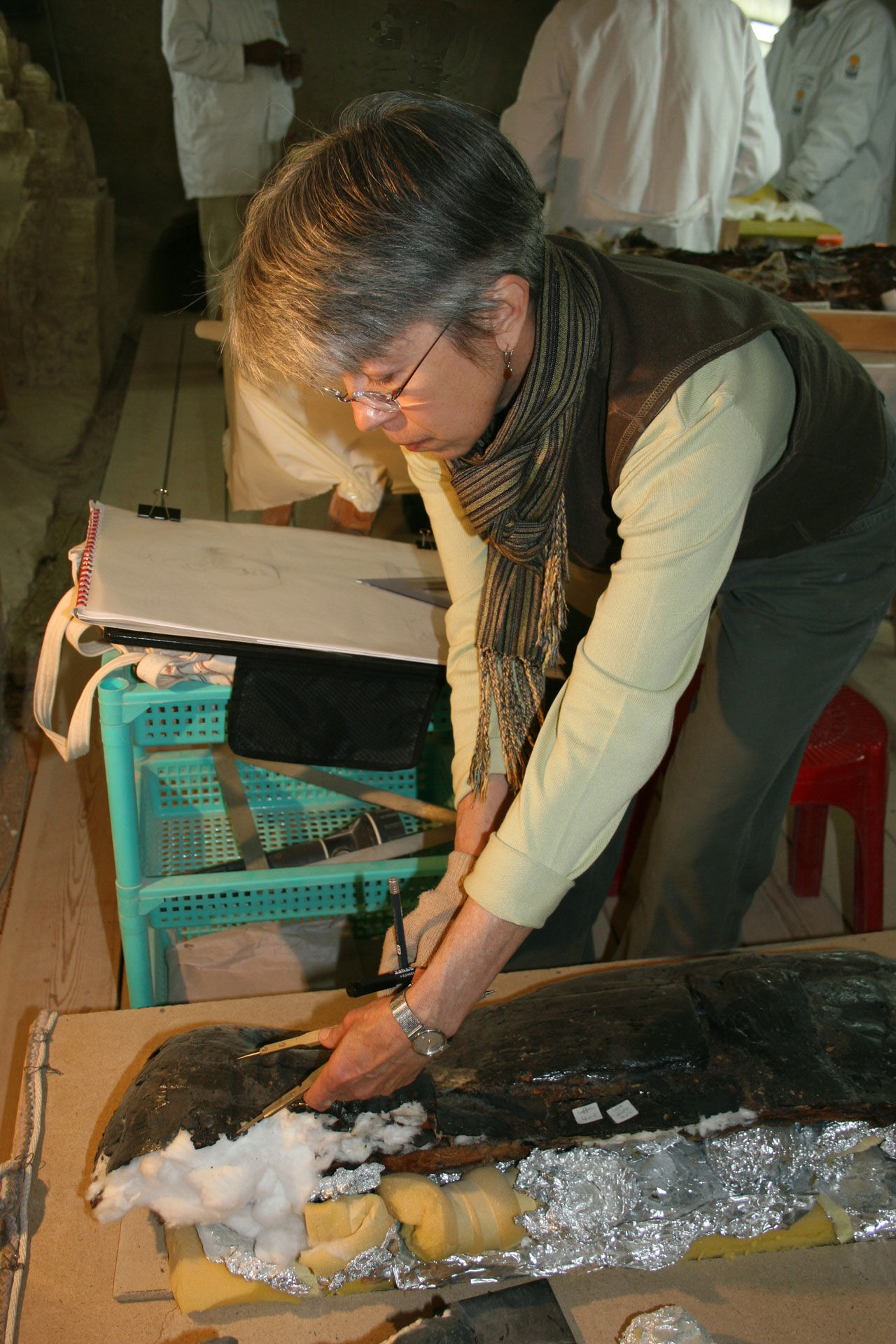 Measuring and drawing the remains of Coffin C in 2010 after it had been moved up to KV10 and conserved. 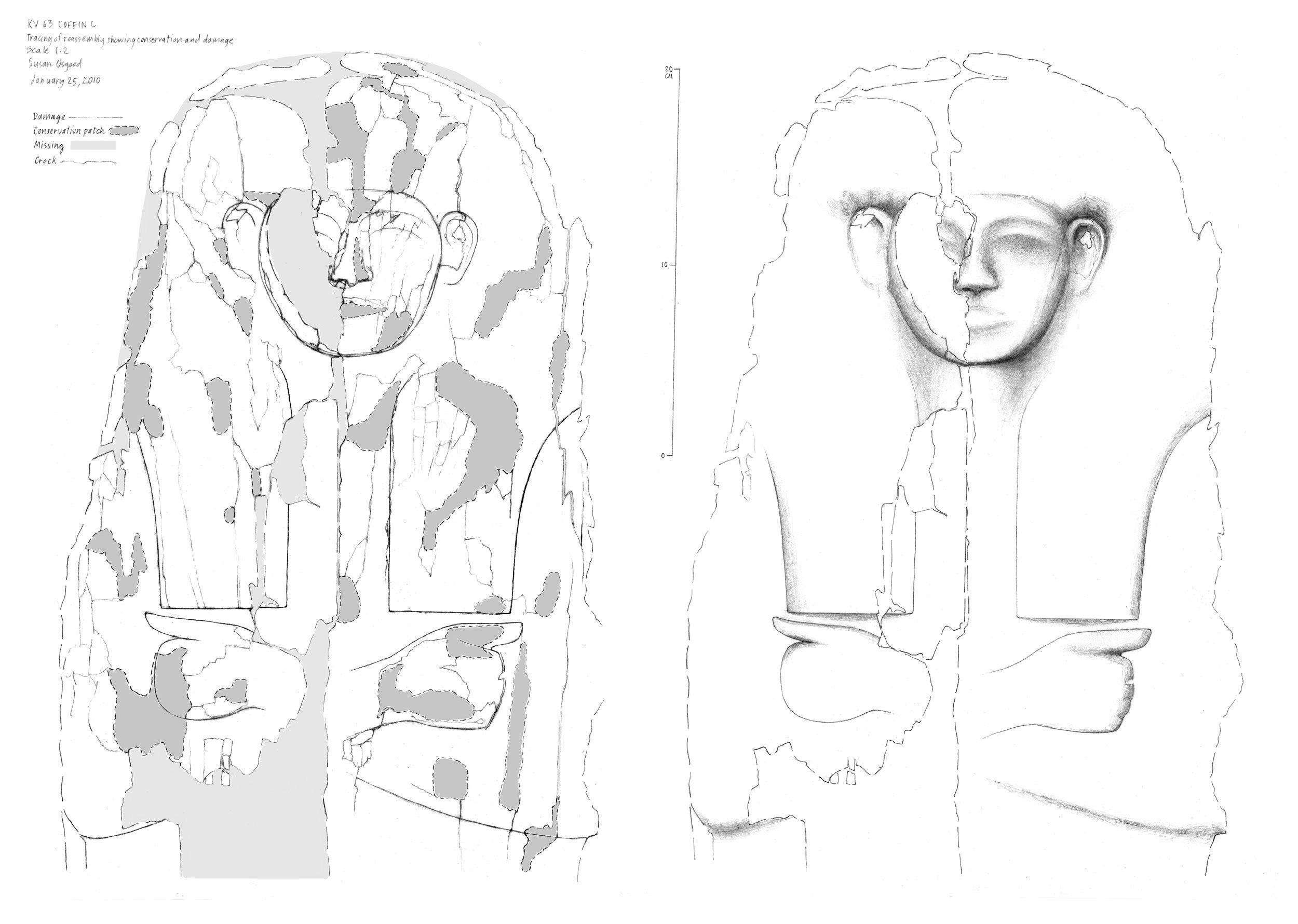 I had the idea to piece the coffin back together accurately without losing any information and wondered if it might be possible and even easier to reconstruct the whole coffin digitally. At that time in 2010, my experience with Photoshop and digital drawing was minimal, but with the help of my colleague Christina DiCerbo, all of the in situ and post conservation drawings were scanned at high resolution and the fine tuning was done in Photoshop. The scanned Coffin C drawings became the matrix from which I would create a hypothetical reconstruction of what the original coffin may have looked like ⎼ before the termite damage, before its move up the shaft into KV 10, and before conservation.

To create the hypothetical Coffin C, I began with the scanned 1:7 in situ pencil drawing on graph paper as a background layer in Photoshop. On top of this I created a new layer on which an outline of the coffin was drawn using the Photoshop brush and ruler tools and the many original measurements that I had taken in situ. The extreme damage had caused each fragment of wood to be warped, curled, and distorted. On a separate layer I selected, copied and pulled in broken, distorted sections and fragments from the in situ coffin 1:7 drawing into this coffin outline and carefully restored the pieces back to an approximation of the coffin’s original state using the warp and distort editing options. 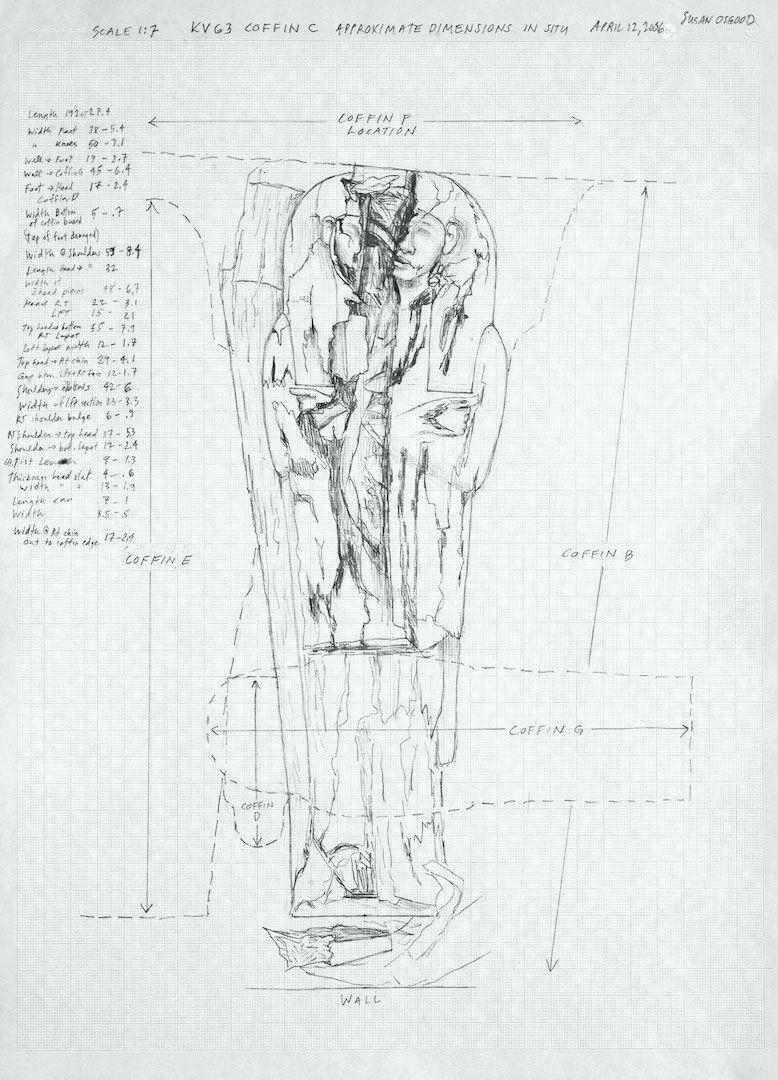 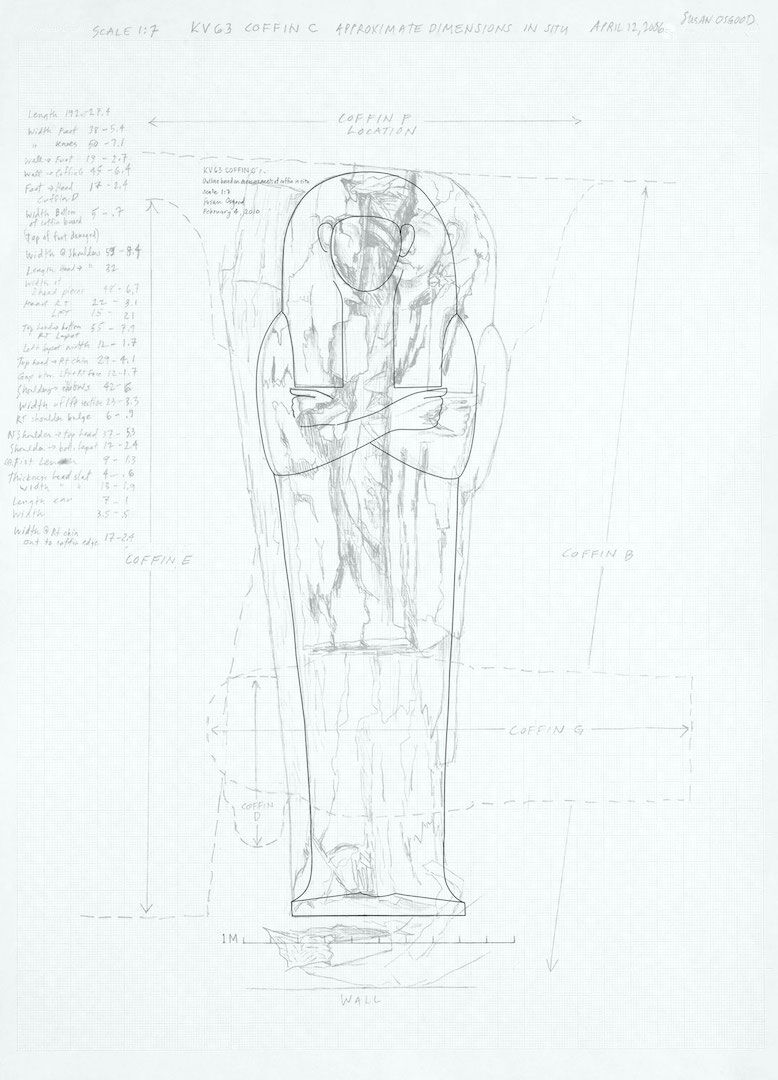 (2)Outline based on measurements superimposed over Coffin C in situ drawing. 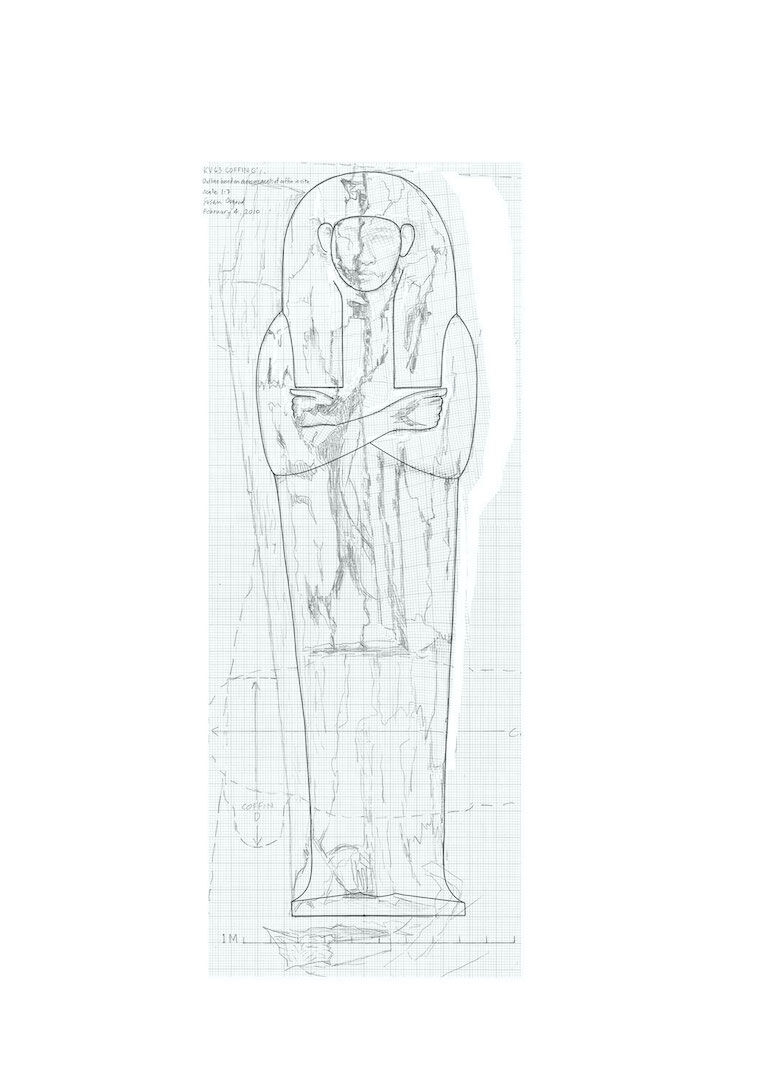 (3)Scanned in situ pencil drawing being manipulated into KV 63 Coffin C outline to create a hypothetical version of the original. 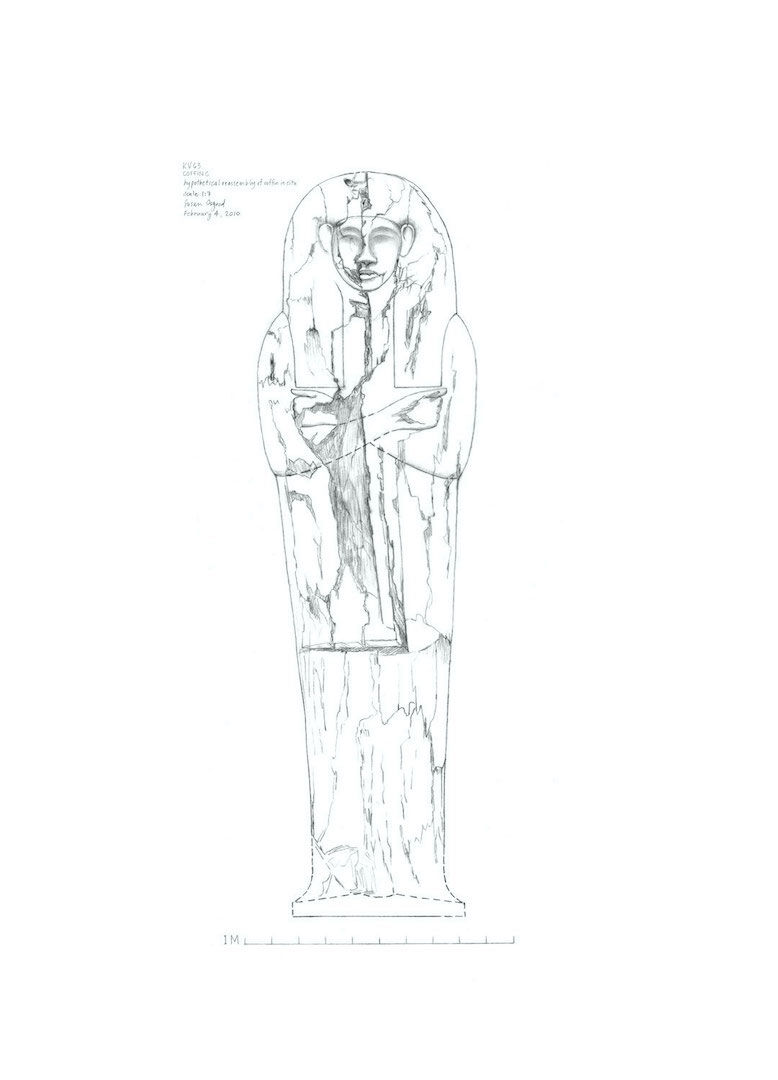 (4)KV 63 Coffin C Hypothetical: final digital version of the in situ drawing manipulated back together in Photoshop.

The fragile condition of six of the eight extraordinary coffins required extraordinary methods to document them without causing any further damage. This process of penciling, scanning, and digitally rejoining Coffin C shows us what was possible at the time. Today photogrammetry would be used to create accurate 3-D images, but back in 2006 that technology was not available for field work, nor were affordable, portable, digital drawing tablets. New digital devices, tools, and capabilities have marked a major turning point in our profession and greatly expanded the possibilities of documentation.

Thanks to Dr. Salima Ikram, current director of the Amenmesse Project KV 10⎼KV 63, for permission to share documentation of KV 63 Coffin C.

Thanks also to Dr. Ray Johnson, for his invaluable art historical advice throughout my work in the tomb; to Christina DiCerbo, who helped me with scanning and reworking drawings in Photoshop; and to Krisztián Vértes, who has brought Chicago House into the digital age.

If you'd like to know more about Susan Osgood's Egyptology-related field projects or her fine art, you can find multiple visual examples at her website.

If you'd like to know more about this project, you can download Otto J. Shaden's 2009 Post-Season report to the SCA from here.

coffin
pencil
valley of the kings 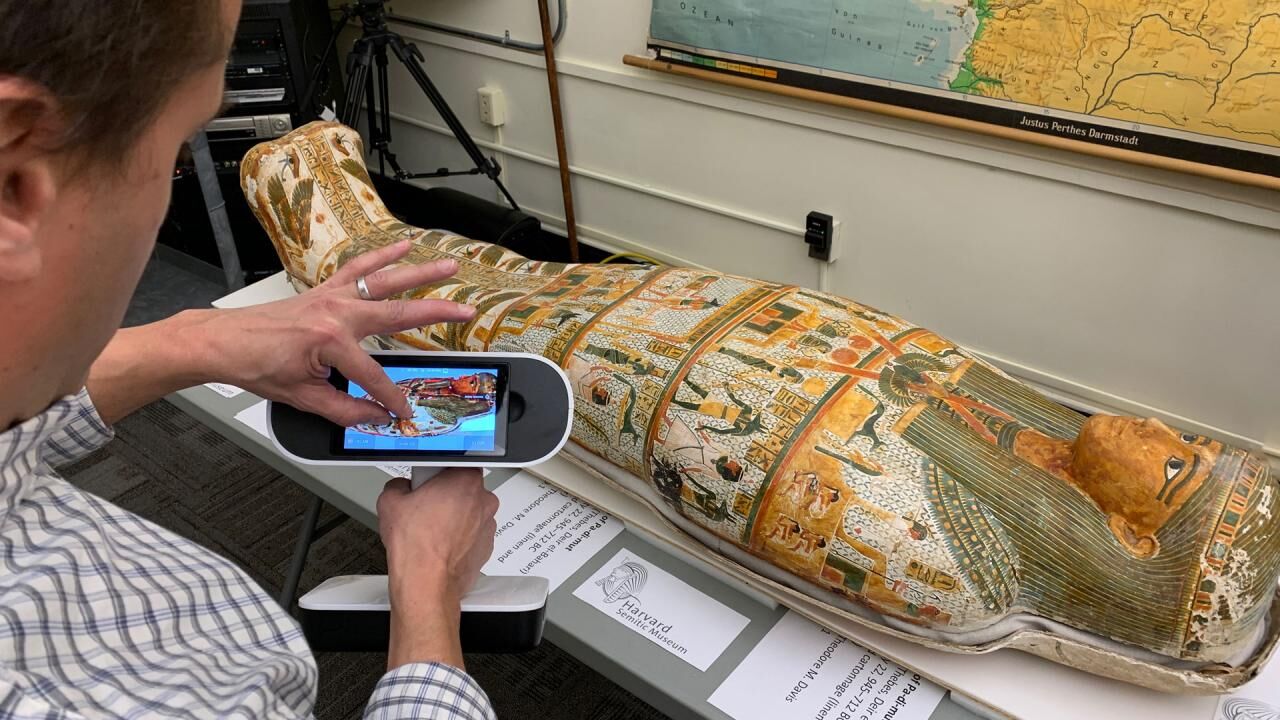 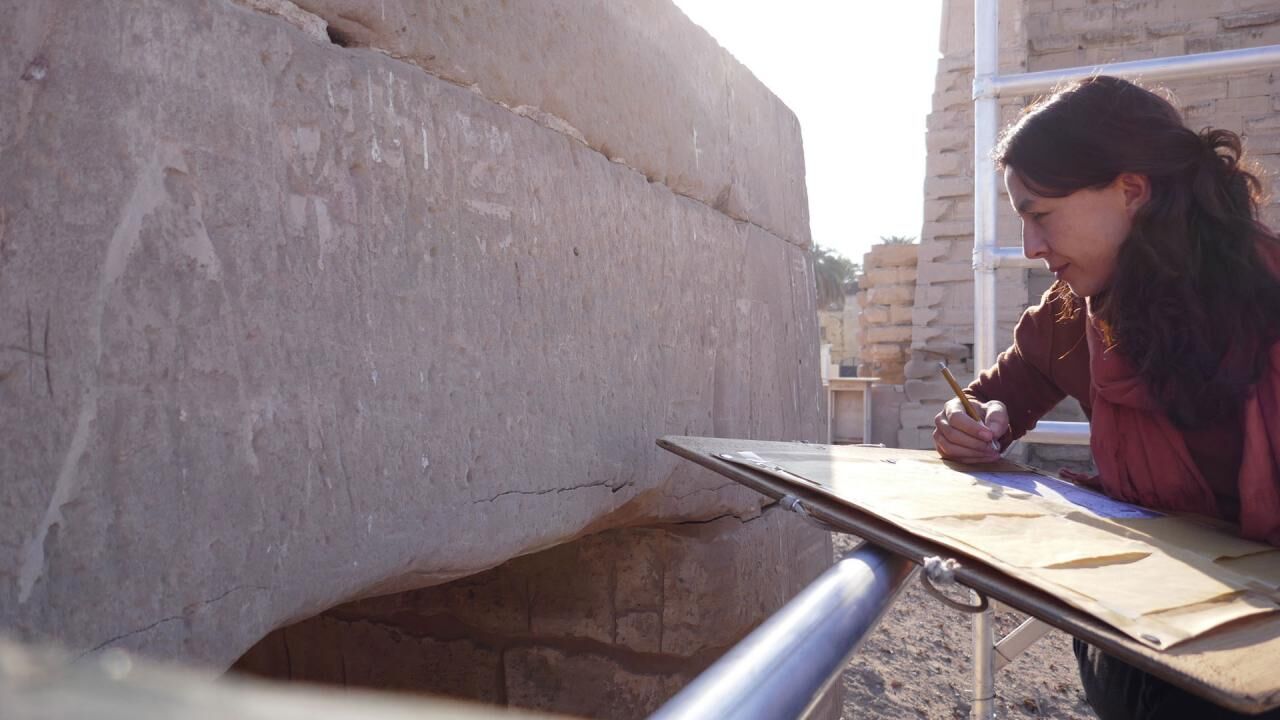 Within the Medinet Habu Temple complex in Thebes, just north of the Small Temple and near the Sacred Lake, is an unassuming monument standing alone among the remaining rubble of an ancient mudbrick wall.

Please carry on with the great work .